I hope this Friday we get to hear Caroline Glick weigh in on this.

If you read my post on JoeSettler, you'd know that relations with Turkey are going down the toilet at warp speed.

Apparently there isn't much the Turkish government won't do at the moment to effectively end its relationship with Israel.

On Turkish State sponsored TV TRT1, the Turks are running a new prime-time show that portrays Israeli soldiers as indiscriminately and bloodthirstily murdering Arabs left and right - even lining them the Arabs up to be killed by firing squads.

As you can see, the fighting scenes are really poorly choreographed. It looks like the Palestinians are shooting each other in the back. Hmmm. Rather true to life on second thought. 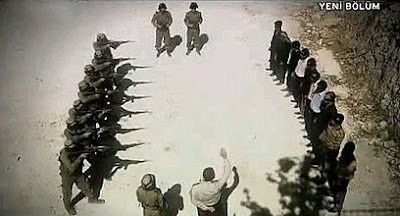 Anyway, unless you're an anti-Semite, you know that Israel doesn't do such things. (Here's where our idiotic/dweeb anti-Semitic readers actually think they receive an invitation to comment).

Yet the question deserves to be asked, where are the Turks coming up with ideas like firing squads and the other things they blame on Israel in this popular TV series?

Why actually one needn't look much further than Turkey's own sordid trysts with Genocide.

Firing squads are part of the history of Turkeys in their attempt at genocide against the Armenian people, and more recently the Kurds.

Yup, the writers of this Turkish trash are actually projecting and portraying parts of their own sordid history on TV, and rebranding Turkey as Israel.

Must be the guilt.

This Latma piece on Turkey is far more entertaining.

I love "Merkaz Ha Pik". Or the fake Israeli Flag. Or the very authentic uniforms...

If only we did 10% of what those filthy beasts are implying we did, maybe we would not be facing criticism from the likes of them today.

Is this Latma video available with English subtitles as the other ones are?

Quietus Leo: The one and the same :-)

Anonymous: I'm talking to Latma about getting all their video's subtitled.

So, for one, who cares what some TV show says about Israel, Americans have been doing it to the Russians, Germans, and the Arabs for years. Its free speech. Don't get your feathers all ruffled. Its a stupid show. It was made to get viewers to tune in, because Turks are loving these types of movies these days (Valley of the Wolves is incredibly popular over there)

I am bothered by that word "anti-semitism" applied so liberally. It implies racism and hatred. Thats what the Nazis did, and simple diplomatic criticisms are nothing at all close to what the Nazis did to the Jews.

Also, criticizing Israeli policies doesn't make a country or a person an "anti-semite." If so, then the UN Human Rights council is anti-semitic (see October 2009 resolution), and if that bothers Israel so much, then Israel might as well leave the UN wouldn't you say?