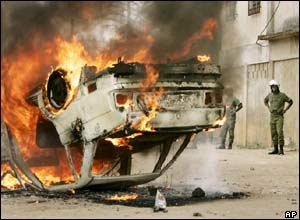 B'Tzelem, the pro-Palestinian organization has reported the following as a Human Rights abuse:

Palestinians from the south Mount Hebron area in the West Bank claim that in the past few days IDF soldiers have destroyed several vehicles belonging to people who have used them in attempts to smuggle Palestinians into Israel.

The B'Tselem human rights group on Tuesday quoted one Palestinian as saying that seven or eight vehicles have been destroyed by the IDF in recent days.

"Yesterday they burned down a Ford Transit that was worth NIS 15,000 ($4,000)," the Palestinian said, "And the day before that they set fire to a Subaru. Sometimes they push the vehicles into the valley, or ram into them with their jeeps."

The IDF Spokesperson's Office said in response, "The alleged incidents go against the army's values and guidelines. (YNET)

Am I missing something? How exactly does this go against IDF values and guidelines -- what's wrong here?

In other countries, its routine that cars used by criminals, such as drug dealers, are impounded and then sold or destroyed.

I think the UN should condemn Israel for its criminal disregard for the basic rights of automobiles.

Herbie the Love Bug and Chitty Chitty Bang Bang are probably turning in their graves. (Or junkyards...)

They want REIMBURSEMENT for the vehicles (probably stolen anyway).

There are legal processes authorities must go through (including right of appeal) before selling or destroying impounded vehicles.

Normally I think you're right on, Jameel (as opposed to some of your clearly racist commentators- see above). But I think you lose credibility when you highlight questionable actions by the IDF and your attempt to defend them is insufficient. If I had to bet, I think we simply don't have the whole story (the entire story is based on the report of "one Palestinian").

Give me a break. If the IDF doesn't send a strong message to law-breaking Palestinians, their law-breaking only gets worse.

I think the IDF spokesperson meant the alleged actions of the Palestinians goes against army values, hence the army needed to respond.

Jeremy: Since we dont have the whole story -- that's why I did highlight it. After all, it got a whole article about it in YNET; they seemed to think the story was accurate enough to mark it as a human rights abuse.

Fair enough. But I think that if the story is true, it absolutely goes against proper values. The response should be that testimony of a single Palestinian in this matter has zero credibility, the IDF has an excellent (relative) track record of investigating soldiers for improper acts, and we clearly don't have all the facts. Not that there's nothing wrong with it.