The Politics of Saving Lives 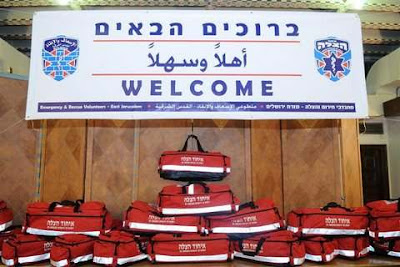 The famous Jewish adage, "Whoever saves a single life, it as if he saved an entire world", is adopted by every life saving organization in Israel. Apparently, the mitzva (Jewish commandment) of savings lives is so great, that even organizations that should be working together, end up as rivals. Throw in the politics of Jerusalem as "The United Capital of Israel," and the issue becomes explosive.

As a volunteer for Magen David Adom (MDA) and United Hatzalah, I'm called as a first responder to road accidents throughout the Shomron, West Bank around the clock, 7 days a week. My fellow volunteers and I treat wounded regardless of race, religion, or nationality.

I was impressed with the press release announcement last week from United Hatzala, that they were opening up a new branch of volunteers -- specifically, Arab volunteers in the Eastern Arab neighborhoods of Jerusalem.

"Last night at the YMCA building on King David Street history was made. A group of Arab medics from East Jerusalem joined the growing ranks of United Hatzalah's medics. Arab and Jew, religious and secular, right and left joined together to welcome the 30 new medics. 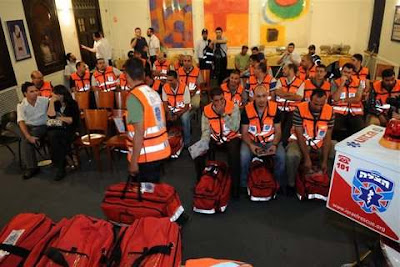 Until now, emergency medical care was seriously hampered by the security requirements for police escort of responding ambulances, unmarked and inaccessible alleyways along with simple language barriers.

So what's the problem? The following attack from Aryeh King was published all over Hebrew web-boards here and here for example, and then followed up on Arutz Sheva in English.

From Aryeh King, Head of the office of public inquiries concerning East Jerusalem issues. [Jameel adds: I have never heard of such an organization]

1. To stop all connections and cooperation with the medical organization called "United Hatzalah"

2. To stop all donations to "United Hatzalah"

His many reasons all boil down to this: Supporting United Hatzalah means you are supporting medical aid to terrorists, Arabs, dividing Jerusalem and supporting an organization that removed the Jewish Star from its symbol for Arabs.

Lets take a look at some salient facts:

1. The facts on the ground are that MDA is ceding East Jerusalem's emergency services calls to the PA-controlled Red Crescent. This alone easily facilitates an eventual transfer of all social, municipal and political control -- a squeeze play straight out the Olmert/Livni/Kadima playbook, as Israel will cut their ties with Eastern Jerusalem.

Eli Beer of United Hatzalah has confirmed this to the Muqata Blog -- based on his numerous sources within MDA that a "secret agreement" of this type exists, brokered by, and involving Livni, Olmert, MDA and the International Red Cross -- that MDA will be phasing out their emergency medical services to Arab neighborhoods in East Jerusalem.

2. United Hatzalah (as opposed to Hatzala Israel, which was ordered closed by the Rasham HaAmutot/Non Profit Organization Registrar due to corruption) is the only nationwide fully volunteer emergency medical organization" --- welcomes Jews from all backgrounds Ashkenazi and Sefardi, Chassidish and Litvish, men and women, religious and secular and now non-Jews -- Arabs, Bedouin, Druze and Christians. I have received general greetings on my MIRS emergency radio from United Hatzalah wishing their Jewish volunteers a "Shana Tova", their Moslem volunteers a "Ramadan Kareem"

3. The Arab volunteers who live in Eastern Jerusalem are all volunteers or employees of Jerusalem's Jewish hospitals, clinics, nursing homes, MDA and other entities within the Jewish areas -- and they all want Israeli emergency medical services for their neighborhoods. Why? Because the level of service and professionalism far outperforms that of the Palestinian Red Crescent. Therefore, by United Hatzalah providing services -- they are in fact, STRENGTHENING any Jewish connection to these neighborhoods, instead of abandoning them completely like MDA...and as Kadima and Ehud Olmert would have preferred.

4. MDA (and United Hatzalah) will continue to provide emergency medical support for Jews throughout Jerusalem, but because of pressure from the era of Olmert, Livni, and International Red Cross, it is possible that the first treatment a Jew in Eastern Jerusalem might receive, be from a Palestinian Red Crescent ambulance -- because they are already all over the Eastern part of Jerusalem. With their own hands, Olmert and Livni have divided the city (with MDA's tacit agreement), and the "Palestinians" provide emergency medical services.

5. The money donated for the above United Hatzalah project for Arab medics in East Jerusalem is earmarked specifically for that project, by a donor who wanted it only for that project. Not a cent or agora from a regular donation will go to that project (unless specifically requested), nor will the money end up in "Umm Al Fahm" as alleged by Aryeh King. 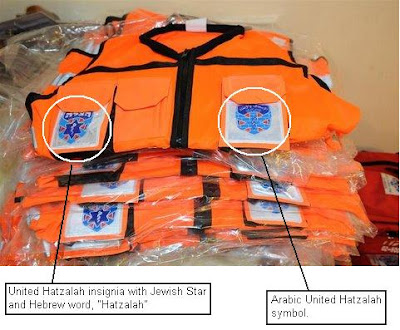 I don't know exactly who Aryeh King prefers you get your emergency medical aid from -- MDA which has already abandoned Jerusalem, the Palestinian Red Crescent which is operating in Jerusalem, or from United Hatzalah which has committed the terrible crime of forging a relationship with Arabs in Jerusalem on the basis of saving lives for their OWN population, which if anything, keeps the Palestinian Red Crescent farther away from Jerusalem.

While nationalistic and political aspirations of the PA leadership, Ehud Olmert, Tzippy Livny, MDA, and the International Red Cross are the driving force of bringing the Palestinian Red Crescent into Jerusalem, United Hatzala is trying to offer a more professional alternative -- which not only provides a better medical solution for the Arabs of Eastern Jerusalem, but helps keep whatever little Israeli sovereignty is left in Eastern Jerusalem.

I guess Aryeh King can call ZAKA -- since by boycotting United Hatzalah he's eliminating the last emergency medical organization not totally in favor of splitting Jerusalem.

Its an example of Jewish-Arab cooperation that is humanitarian. If people of different faiths can't do something simple and profound together for humanity, the world is a poorer place for it.

As much as I respect Arieh King for all that he has done for Jewish neighborhoods in east Jerusalem, ever since I first read about his complaints against united hatzalah I thought that they were incredibly misguided. Normal relations with the Arabs are the key to a unified Jerusalem, and excluding them from employment and volunteer organizations plays into the hands of those who want to divide the city.

Saving lives? What a horrible misguided thing to do! Faugh! Feh! The horror, the horror!

It's all part of the culture of dependence. We will have none of that!

Aryeh King should stick his head in a bucket.

Arieh King's ridiculous letter also highlighted massive ignorance about the large majority of welfare orgs within the Jerusalem area, who a) almost all maintain partnerships on the Eastern side of the city of varying degrees, and b) *all* are reliant upon overseas/foundation funding in order to survive- he'd clearly have issues with many of the funding sources, from his sanctimonious tone. He reminds me of those pathetic "Boycott Israel" people- and similarly, he'd have to move cities if he insists on avoiding using or endorsing organizations with what he considers to be "tainted" funding.

Go United Hatzala, for a whole bunch of reasons.

>the last emergency medical organization not totally in favor of splitting Jerusalem.

i admit to a lack of knowledge about the internal politics of rescue organizations in general and found this interesting and informative.

but really? these organizations have publicly declared stands regarding the division of jerusalem? surely you must be referring to "fact on the ground" aspects of operational procedure rather than political statements?

jonathan: According to Eli Beer from United Hatzala, MDA was part of the "secret agreement" to stop their work in Eastern Jerusalem.

On a side note, MDA has been begging to join the International Red Cross for years, and were recently admitted -- on the condition they remove their "Red Magen David" from their insignia when abroad (no such demand was made of the Red Crescent).

Their political views must line up with the IRC, if they are going to remain a member.

This should provide Aryeh King with more excitement- or does he not mind Christian funding, just Leftist money?