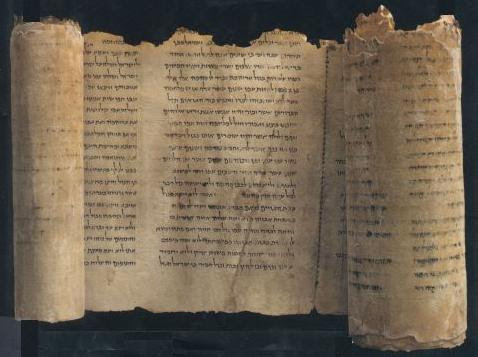 Perhaps the Missing Dead Sea Math Scroll
written in the newly discovered Qumran latrine?
Those following the ongoing saga of Dead Sea Scrolls will be happy to learn of a new development.

Researchers say their discovery of a 2,000 year old toilet at one of the world's most important archaeological sites sheds new light on whether the ancient Essene community was home to the authors of many of the Dead Sea Scrolls.

In a new study, three researchers say they have discovered the outdoor latrine used by the ancient residents of Qumran, on the barren banks of the Dead Sea. They say the find proves the people living here two millennia ago were Essenes, an ascetic Jewish sect that left Jerusalem to seek proximity to God in the desert.

Qumran and its environs have already yielded many treasures: the remains of a settlement with an aqueduct and ritual baths, ancient sandals and pottery, and the Dead Sea Scrolls — perhaps the greatest archaeological find of the 20th century.

The scrolls, which include fragments of the books of the Old Testament and treatises on communal living and apocalyptic war, have shed important light on Judaism and the origins of Christianity.

Thanks to an Israeli anthropologist, an American textual scholar and a French paleo-parasitologist, researchers can now add another find: human excrement.

Err, you can read the rest of this over here at YNET.

It's important to note that this newly found latrine has absolutely nothing to do with the complaint filed against Israel by Jordan, for bad odors wafting across the border.

Israel says it's doing what it can to eliminate a royal stink that's developed along its border with Jordan. That's after Jordanian King Abdullah II complained of a less than princely odor wafting from the Israeli side of the countries' shared southern border, Israel's environment minister said Monday.

Gideon Ezra told Israel Radio that Jordanian officials last week asked that the stench from a livestock quarantine facility in Eilat be neutralized after it drifted across the border frontier toward Abdullah's palace in Aqaba. Hat-tip: YSRM

I guess since posting about the new Hizbolla unisex perfume yesterday, the whole region needs to be aired out.

In a new study, three researchers ... say the find proves the people living here two millennia ago were Essenes, an ascetic Jewish sect that left Jerusalem to seek proximity to God in the desert.

In fact most Jewish researchers have drifted away from the Essene theory and see in Qumran a pottery factory quasi agricultural settlement. The scrolls of various sects can be explained by refugees escaping Jerusalem seeking temporary safe storage for their precious documents as they fled the conquering Roman army.

Hi i just surfed in searching for interesting facts on Essenes in the blogs.
you have a cool blog. Do keep up the good work. I'll be back for more. i live
far from where you live. its nice to be able to see what people from across
the world thinks.

On a related note perhaps you might find the following article interesting.
we are currently doing a series of posts on essenes and their culture and i'll
like to hear your take on the subject via comments. See ya there....

Warm Regards from the Other Side of the Moon.
Bijoy Cletus - Kerala, India