4:33 PM Israeli Leftists -- The Cancer Within. (Who is Mazal Mizrachi?)

The hatred of the Left in Israel is simply limitless. In their desire to destroy Israel, they have gone so far as to actively petition the World Court in the Hague -- that Israeli politicians and IDF officers be tried for War Crimes against humanity, for their part in the Gaza "Cast Lead" counter offensive.

The Jerusalem Post reports that the IDF is taking steps to "cloak the participating" of IDF officers so that they won't be easily targeted.

The IDF has decided not to release the names and pictures of battalion and brigade commanders who participated in Operation Cast Lead, Army Radio reported Wednesday morning.

The decision was made in anticipation that international war crimes lawsuits would be filed against IDF officers, who could face prosecution when traveling overseas.

Defense Minister Ehud Barak has ordered the IDF to set up a team of intelligence and legal experts to collect evidence related to operations in the Gaza Strip, that could be used to defend military commanders against future lawsuits. (JPost)

So Israeli Leftists created a website (wanted.org.il) appealing to Israelis to inform the World Court if any of these people leave Israel (so they can be arrested and prosecuted)

Pictured here is a "warrant" for IDF Commander in Chief, General Gabi Ashkenazi. 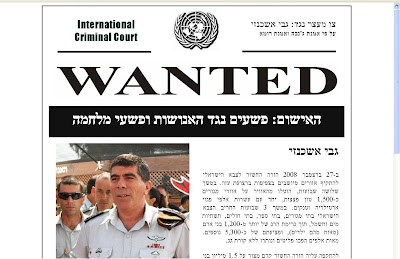 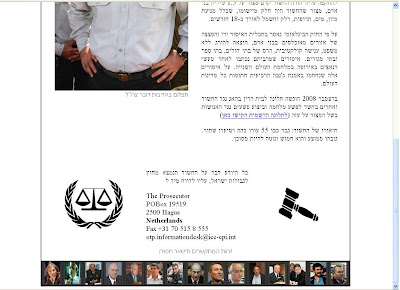 WANTED
For Crimes Against Humanity and War Crimes.
Gabi Ashkenazi

One 27th of December 2008, the suspect ordered the Israeli army to attack crowded, civilian areas in the Gaza Strip. For 3 weeks, 1,500 ton bombs were dropped from the air on residential homes, along with tens of thousands of artillery and tanks shells. For 3 weeks the Israeli army destroyed residential homes, schools, hospitals, water and electrical infrastructure, causing the deaths of at least 1,200 people (hundreds of them, children), and over 5,300 wounded. Hundreds of thousands are now refugees with no homes.

The attack, ordered by the suspect was preceeded by a siege against 1.5 million people, a siege which the suspect took part in, including withholding food, water, medicine, fuel and electricity for 18 months.

According to International Law, it is forbidden to shoot and bomb residential areas, execution without trial, collective punishment, destruction of hospitals, schools and homes. These prohibitions, many of which were legislated as a result of the Nazi's behavior in World War Two. These prohibitions were agreed to and signed within the Fourth Geneva Convention by the entire world.

In December 2008, a complain was loged with the World Court in the Hague against this suspect and others, for allegedly carrying out War Crimes, and Crimes Against Humanity during the Siege in Gaza.

For the formal complaint, see here.

Whoever knows when the suspect leaves Israel, he should immediately contact:

Who are these proud patriots of Israel, those who hold such a high moral ground, that they are actively trying to destroy Israel's army?

It's not hard to find out. According to the standard "whois" lookup database, the "wanted.org.il" website listed above is registered to the following:

Anyone know how to easily file a Police Complaint?


1:57 PM Excellent article: Our Neighbor and Why We Have to Kill Him

Our neighbor lives in the house in which our grandfather used to live. He claims he bought the first part of the house from a Turki, and later the second part from a British bank, but that doesn’t make the sale any less illegal: my family lived in that house for hundreds of years and we don’t accept the documents of sale. Now he’s living there. He is the son of monkeys and pigs.

Aharon Karov, the 22-year-old soldier from Karnei Shomron who went to war in Gaza a day after his wedding and was critically wounded, is recuperating nicely and due to go for rehabilitation in a week.

Karov, the parachutist son of the rabbi of the local yeshiva, suffered multiple wounds a week ago when he entered a house booby trapped by Hamas.

Prof. Pierre Singer, head of intensive care at the Rabin Medical Center-Beilinson Campus, said that the young bridegroom had undergone a series of operations, spending 14 hours in surgical theaters for treatment of his acute wounds. Neurosurgery was followed by an operation on his left eye to remove shrapnel, as well as operations on his mouth and jaw, and ear-nose-and-throat surgery - all in one day.

"We were very pessimistic when he came in," Singer said.

Although his head was protected by his helmet, shrapnel went through his face and his skull. He also suffered wounds to his arms and legs, but his chest and abdomen were protected and suffered no harm.

Singer suggested to the IDF chief medical officer, who visited Karov, that he consider equipping soldiers on the battlefield with clear visors such as those covering the faces of hockey players. This could prevent many facial and head injuries, the Beilinson specialist said.

The IDF doctor "told me the IDF will consider it, and viewed my suggestion positively," Singer said.

On Monday, Karov regained consciousness and was weaned from his respirator, although he continued to receive some sedation to alleviate pain.

"He knows what is happening to him, has gradually begun to recognize his relatives and environment and is able to move all four limbs," Singer said. "We hope to put him in a chair today. His vision is also expected to be normal."

As far as Singer can tell, Karov has suffered no permanent damage to his brain and will be cognitively normal. However, he will need plastic surgery to repair his nose and will have permanent scars.

But his new wife Zvia, who has been at the Petah Tikva hospital round the clock along with dozens of relatives and friends, is overjoyed to see his progress.

"We were amazed by the speedy improvement in his condition," said Singer. "The excellent care on the air ambulance and very aggressive operations and intensive care in the hospital made the difference."

He should be discharged four weeks after rehabilitation, which will likely take place at Sheba Medical Center, Singer hoped.

Read more at the JPost.

11:31 AM Despite the Israeli police forcefully insisting that no mortars were fired at Israel yesterday and that all the air raid sirens which occasionally sounded in Southern Israel were all "false alarms", we reported that there were mortar strikes in Israel.

This morning, Jan 21, at 9 AM, IDF "Galei Tzahal" Radio nonchalantly announced that "yesterday, there were 2 shooting attacks on IDF positions...and mortars hit the Western Negev".

Could someone repeat that? "mortars hit the Western Negev"

Seems our politicians really did want to stop the war out of political considerations, rather than regards for security.

Additionally, Israeli papers are media report, "Every single IDF soldier is now out of Gaza".

They seem to have forgotten one, IDF Private Gilad Shalit.

I've been trying to figure out all morning who benefits most from keeping the lid on the truth about ongoing attacks (apart from Hamas!). Who is able to keep the wraps on what's really going on and why?

That's why it's called a "cease-fire":

This was my first email of the day from a friend in Beer Sheva:

Another rocket siren last night, a very rude awakening, who knows how this truce is doing. Not quite sure if it was a false alarm or not yet. None of the papers have picked it up yet. Which I find strange.

You misunderstood my promise, Jameel. You see, I meant that we would hit them hard if they fire just one rocket at us. If they fire many, however, we will continue to "cease".

Additionally, Israeli papers are media report, "Every single IDF soldier is now out of Gaza".
They seem to have forgotten one, IDF Private Gilad Shalit.

What I really do not understand, seeing that the majority of Israelis does not have a death wish, why there is not a MASSIVE demonstration against this cease-fire, especially in the areas affected by hamas rockets?

Why Israeli people does not take the streets to ask for total destruction of hamas, or until they recognize Israel and release Gilad Shalit?

Nobody else will help you, in 10 years demographics will make from Europe your deadly enemy.

I want to thank you from the bottom of my heart for helping me to get through the past few weeks. Your blog has been a huge help and I am grateful (and will send a small donation). The world is just crazy. Here we are in Boulder, Colorado, trying to counter-protest the "peace and justice" (or "propaganda and jihad") types but they are everywhere, including in Israel!

JAMEEL, in reference to th Israeli Leftists you have to deal with in your country...
Well here in the USA they have taken over completely. Scary huh ?
During President Bush's 8 years the left wing nut media and the left wing nuts never let up on the man.
I do not know what is wrong with society. It is very very sad.
There is not solution other than to keep fighting back at them and let your voice be heard, too !
God Bless Israel, & God Bless President George W. Bush !

heh told you, the politicians will deny and the media will hide. it's a shame but that's Israel today. Hamas is there now for a long long time.
PD: Livni is a bitch

The question is, why doesn't the Muqata set up an NGO to file for an indictment against the PA and Hamas? If only state actors may be sued, surely Iran and Syria (if not Saudi Arabia and EU members) may be sued over their support for Hamas and Hizbullah. The point wouldn't be to legitimize the ICC, but rather to further waste its time with true crimes.

Don't know who Mazal Mizrachi is but the phone number is belongs to the Bezalel art academy.

Trust me. We here in America are trying our best to take a stand against our Leftists. They are truly misguided.
I will always stand up for Israel!

Someone posted on rotter yesterday that MADA employees were told a Grad was launched in Ashdod, but landed out to sea.
http://rotter.net/forum/scoops1/17990.shtml

Another user posted a snipet of a conversation he had with the IDF censor:
http://rotter.net/cgi-bin/forum/dcboard.cgi?az=read_count&om=17642&forum=scoops1&viewmode=threaded