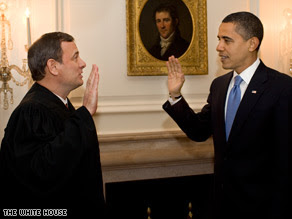 As most of you probably already know, President Barack Obama did not recite the Presidential oath of office 100% accurately at his inauguration this past Tuesday. This was because Supreme Court Chief Justice John Roberts, who administered the oath, spoke the words out of order: Instead of saying "I will faithfully execute the Office of President of the United States", he said "I will execute the Office of President of the United States faithfully". Obama hesitated, apparently aware that Roberts was saying the words incorrectly, and giving Roberts a chance to correct himself. Roberts, however, stumbled on his words and then repeated the incorrect formulation -- at which point Obama simply repeated Roberts' version.

In the comments on a post by DovBear yesterday about the flubbed oath, I raised the question of whether Obama might have to take the oath a second time. After all, the exact wording of the oath is specified in the Constitution, and Obama (due to Roberts' mess-up) said those words out of sequence. DovBear saw it as doubtful that Obama should have to redo it: "I don't see why we need to stand on ceremony. This isn't religion." But as Tzipporah pointed out, one can reasonably argue that it is: "Political pageantry IS America's secular religion, with the Constitution standing as the holy text." I would tend to concur.

Well apparently, the President's White House counsel sees it this way as well. Yesterday, he paskened that min hastam, Obama was yotzei b'di'avad with the first oath -- but nevertheless, so that there should be no hashash ("out of an abundance of caution"), he still had Obama take the oath a second time l'humra, in order to be yotzei l'khol hadei'ot.

Obama retakes oath of office after Roberts' mistake
...
The do-over was aimed at dispelling any confusion that might arise from Tuesday's take -- in which "faithfully" was said out of sequence -- and erase any question that Obama is legally the president.
...
"We believe that the oath of office was administered effectively and that the president was sworn in appropriately yesterday," White House counsel Greg Craig said Wednesday in a written statement.
"But the oath appears in the Constitution itself. And out of an abundance of caution, because there was one word out of sequence, Chief Justice Roberts administered the oath a second time," the statement read.

(The article linked above contains an audio recording of the second oath, which was taken on Wednesday at 7:35 pm EST in the White House Map Room.)

Greg Craig's psak was presumably influenced by the rulings issued by many major poskim over the last two days, that Obama should have to do the oath over again: Constitutional scholar Jack Beermann of Boston University went so far as to say that there is a real hashash that Obama wouldn't actually have the halakha of "President" until he recites the oath using the proper nusah. He acknowledged that one could have a hava amina not to repeat the oath because doing so might cause embarrassment to the Chief Justice -- but concluded that the importance of the mitzva of the oath overrides the kavod of the Chief Justice.

There's another nafka mina, how do we relate to the acts of Government that President Obama made prior to the second oath?

The second taking of the oath confirms that for a short time Mr. Biden was most likely the President.

However, it seems from the Rambam הלכות שבועות פרק יא הלכה ג that it's OK to do so לכתחילה, as he says:

Here too, Obama's second oath, even if the first oath is valid, can be used כדי לזרז את עצמו.

At this point, I think I've gotten as carried away as Lurker with this, so I'll stop.

Two thoughts related to this thread went through my head while wattching the Inaugaration tekes:

1) This is a modern American secular version of the Avoda in the Beit Hamikdash on Yom Kippur with all the steps that must be followed.

2) I wonder if the principle of "Taut L'olam Hozert" applies - if a mistake is made where no mistake is permitted, then the ceremony (and the oath in this case) will be changed from now on and forevermore so that a "change" has occurred rather than a "mistake". Obviously this position was not taken since the oath was later repeated - unless going forward the oath will be administered twice - once in public with one formulation and later in provate with the original formulation...

Most likely, this is a non issue... first of all, six presidents before obama have also re-taken the oath of office. From wikipedia:
"Presidents Chester A. Arthur and Calvin Coolidge took their first oath in a private venue (their residences), in the middle of the night, immediately after being notified of the death of a predecessor (James A. Garfield and Warren G. Harding, respectively). They later retook the oath after returning to Washington. In the case of Coolidge, there was an additional doubt whether an oath administered by a public notary (Coolidge's father) was valid.[15]
Four presidents took a private oath when Inauguration Day fell on a Sunday, and then a second oath in a scheduled public ceremony on the next day (Monday): Rutherford B. Hayes in 1877 (who actually took the private oath on March 3rd, a Saturday, one day before his term started), Woodrow Wilson in 1917, Dwight Eisenhower in 1957, and Ronald Reagan in 1985."

Secondly, and even more importantly, the whole issue of the oath is arguably a moot point. The 20th amendment to the US constitution states that "states that the terms of the President and Vice President shall end at noon on the 20th day of January and the terms of their successors shall then begin." Many constitutional scholars argue that, because the 20th amendment makes no mention of the oath, the president-elect becomes president at noon of January 20th, even if he would elect to never take the oath.

I would like to point out when you mention that Hamas uses schools and hospitals as launch sites that is not accurate. Hamas runs the show they actually these locations into military installations and they should be described as such.

I would like to point out when you mention that Hamas uses schools and hospitals as launch sites that is not accurate. Hamas runs the show they actually turn these locations into military installations and they should be described as such.

Obviously this position was not taken since the oath was later repeated - unless going forward the oath will be administered twice - once in public with one formulation and later in provate with the original formulation...