3:56 PM The Muqata crew will be signing off today at approximately 4pm (Israel time) for the Shabbat. Updates will continue Saturday night after the Sabbath departs - as per Jewish law.

Shabbat Shalom and we pray this Shabbat for the safety of our soldiers and for the residents of Israel's south (and now, Ayalon more central Israel region)

(We'll know Saturday night if there was a ground incursion on Friday night.)

The following information should be announced in synagogues:

The Rabbi should make these announcements before prayers and remind everyone where the closest shelters are to the synagogue.

- Every region should be alerted how many seconds they have from hearing an air-raid siren, till they must be in a bomb sheleter.

- Try to avoid bringing small children to synagogue, as it is difficult getting them to a shelter quickly.

- Try to avoid large windows in the case of rocket attacks.

- Try to go to synagogues with concrete roofs

Medical/Emergency Personnel: In addition to the previous regions that have been responding to rocket attacks, the Ayalon region is also on alert this Shabbat (and first-responders should listen to the appropriate channels for updates)

-Hamas flags reported hanging in Israeli Arab city of Rahat in the Negev/Southern Israel.
-Signs all over Gush Dan, inlcuding Nes Tziona, Tel-Aviv, and even as "far away" as Kfar Saba, posted by IDF Homefront command/Local Municipalities: "This way to bomb shetlers"
-Rock throwing against Israeli civilians and IDF forces near Beit Omar (Hevron area)
-Israeli Arab mob riots against Israeli police in Jerusalem (video from the scene)

Reports around the world that Israeli nuclear reactor near Dimona is within range of Gaza's rockets. (Times on Line)

There were growing fears in Israel last night that Hamas missiles could threaten its top-secret nuclear facility at Dimona.

Rocket attacks from Gaza have forced Israelis to flee in ever greater numbers and military chiefs have been shaken by the size and sophistication of the militant group’s arsenal.

12:14 PM IDF releases video from 2007 of Hamas terrorists shooting Rockets at Israel from the courtyard of United Nations school building in Beit Hanoun, Gaza. Schools, UN, Gaza -- what a wonderful combination. Not.

12:02 PM Photo from Tel-Aviv/Sde Dov airport, of Israeli Lefistists smeared with red paint (blood) with signs against the IDF: You have blood on your hands. Why aren't they holding their pathetic demonstration in Sederot? [note, they were all arrested for blocking traffic] 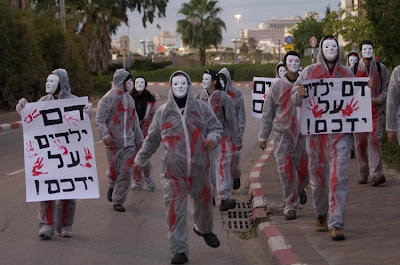 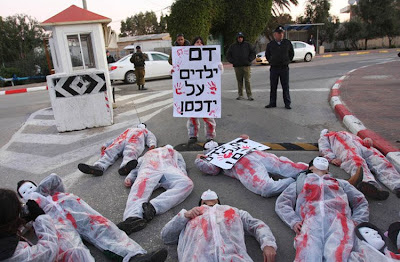 
11:56 AM Are you in Katyusha Range from Gaza? Muqata Exclusive Map (translated by me) 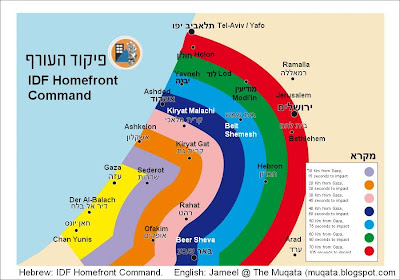 11:23 AM Muqata Exclusive! IDF releases leaflets today over Gaza asking residents for their help in locating Hamas Terrorists. Translation below 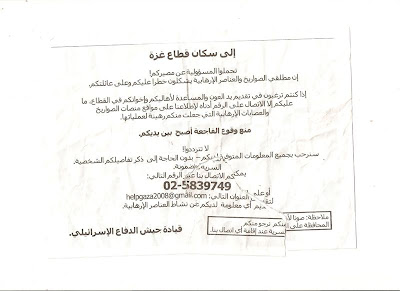 To The Residents of the [Gaza] Strip:

Take Responsibility for your future!

If you are interested in helping your families and brothers in the strip, all you need to do is call and update us with the locations of rocket launches and terror cells that have turned you into hostages.

Preventing a catastrophe is in your hands.

We would be happy to receive any and all information, without you needing to leave any identifiying details.

You can reach us at the following number, 02-5839749 or email us at helpgaza2008@gmail.com to send us any information about terror activity.

Note: We promise full secrecy in your contacting us

(source for above in Hebrew)

11:14 AM Since 11 PM today, the YNET Israeli News site in English has been hacked. The hack does not appear to everyone (YNET might not even see it!) -- and in my Webbrowser, it doesn't appear. (Though I'm told it does in FireFox). Screen Snapshots couresy of Rabbi Bob Carroll who sent it first, though MANY others did, and we appreciate your emails :-) 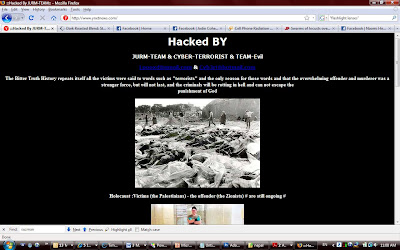 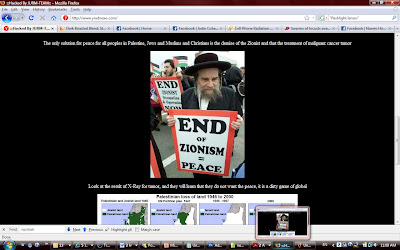 11:09 AM WWW.YNETNEWS.COM Website hacked by Palestinian Hackers. (Print screen coming soon. thanks to all who sent this in! :)

9:35 AM Around 10 rockets shot in the past half hour at Sderot and other towns.

7:56 AM Quiet night until now. Rockets hits Asheklon. Multistory building on fire. 1 lightly injured. The rest of the residents made it safely to shelter before the rocket hit. 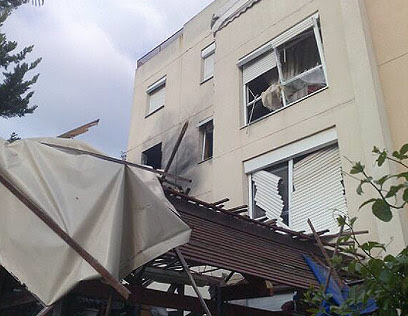 12:02 AM (YNET) The Air Force (IAF) struck a mosque in Jabaliya refugee camp in northern Gaza. According to the IDF, the mosque was being used to store arms and as a communications center, as well as cover for terrorist activities. It is the fifth mosque to have been bombed since the beginning of the operation.

B'H the "politically correct" insanity on not bombing mosques seems to be over.

thought i would stop by and see whats happening before turning in. congrats on your hit of Rayan. great shooting IDF! stay safe.

When Jordan illegally annexed the west bank and burned and destroyed close to 70 synagogues calculating the difference there appears to be a disproportionate number on my politically correct abacus. I thought maybe we could use Al Gore's model of a carbon footprint applied to war. Where the country surrendering would receive trees to make up for the destruction of concrete. I must also include the psychological stress and paranoia counseling on Israelis lesser or greater than the institutional hatred practiced by the palestinians to the Hamas degree.

Probably helps to have videos on YouTube for people to see massive secondary explosions.

Firefox here, ynet is not looking pretty. Question for the technoignorant around here ... does opening a hacked page damage my computer? Like a virus or something?

[note, they were all arrested for blocking traffic]

they could not have been arrested for illegal assembly, as they for sure were less than 50 people. There aren't 50 Jewish Israelis with these opinions in all of Israel

Not the first time they fire in the yard of this UN school:

Doh. I want to correct myself. I did not see that the video of firing mortar was not recent, but from that time when they shot them in 2007 and the UN eventually had to condemn them. My apologies.

Geez, you've got leftist morons there just like we have in the States. I didn't know that.

Good luck and God bless y'all!

Thank you for this blog- I am a friend of Chanan D's (in LA)- we work together- Keep up the terrific work- I edit a Jewish monthly- and your blog is where I go to check it all out almost every 1/2 hour....I lived through the Yom Kippur war, and lived in Israel for five years--it is also always in my heart--Sue

P.S.- I lived on Ofakim for a year--beautiful people and we had great friends..Sue

i cannot imagine how people can survive to 7 days of wars, i think that this is inhuman because they have the same rights that us, so, i want to make a campaign against the war.
Caverta Silagra