11:27 PM Now that Israeli PM Ehud Olmert has announced that the IDF response to today's Hamas terror attack, "is going to come", I'm going to sleep.

Prime Minister Ehud Olmert said, "The IDF's response today was an operational one," Olmert said. "This is not a response to an incident in which an IDF soldier was killed and three injured. The Israeli response to this incident will come." (ynetnews)

11:07 PM PA President and Published Holocaust-Denier Mahmoud Abbas announces that he plans on telling US Middle East envoy, George Mitchell that Israel's Gaza offensive proved it was not intent on peacemaking.

"We will do all we can to prove Israel committed crimes that would make your skin crawl," Abbas said, referring to the Geneva Conventions. "We want the world to give us justice for once." (YNET)

And this is who Mitchell and President Obama want to strengthen?

There are no plans for the US negotiators to meet with any Hamas leaders. Rather their emphasis will be on the immediate relief of the humanitarian crisis in Gaza and strengthening the position of the Palestinian Authorities Chairman Mahmoud Abbas [Abu Mazen]. (sourced today,"George Mitchell: US Envoy Champions Abbas")

10:39 PM Polish Website compares IDF actions in Gaza to that of Nazis (along with "Palestinian Holocaust" banner for donations). Wow. Poland, can you believe it? Of all countries on the planet?

10:08 AM Taking bets on the name of the next IDF operation against Gaza. I think it could be called "Blooming Almond" (Shaked Pore'ach), in honor of the upcoming Tu Bishvat holiday.

Additional Bets: Tomorrow, there is a very good chance of continuing rocket fire at Israel. If Hamas gets lucky and hits something, then the IDF will respond seriously. Otherwise, it will be more of the same, "False Alarms" and zero response.

10:00 PM Additional reports of gunfire at IDF troops this evening at the Kissufim area. No injuries to IDF troops.

9:53 PM IDF Homefront command receives reports that rocket attacks may commence at any time from Gaza.

The IDF does not plan to bring disciplinary charges against a battalion commander from the Golani Brigade who told his soldiers that they needed to do everything possible to prevent being kidnapped during the recent operation in Gaza including blowing themselves up with a grenade.

In a tape recording of a briefing the commander of Battalion 51 gave his soldiers before entering Gaza during Operation Cast Lead the senior officer was heard saying: "Hamas's strategic weapon is to kidnap a soldier and I don't have to tell you but no soldier from Battalion 51 gets kidnapped at any price and under any situation even if it means that he has to blow up his grenade together with those who are trying to kidnap him."

Jameel adds: I don't understand why any charges would be brought against the Golani commander. This has been the standing order for a few years now.

8:08 PM Palestinians claim that their Qassam Brigade commander killed on his motorcycle today by an IAF airstrike, was targeted by an IAF aerial unmanned drone.

note; JoeSettler wrote the comment below...I have no idea what I'm planning for tomorrow! (Joe, maybe give me a hint?)

7:55 PM Why is Hamas attacking? (Why didn't they actually stop attacking during the "ceasefire"?) What do they have to gain from this? What happens next?

These questions and more will be answered in a special post by Jameel planned for tomorrow. Stay tuned.

7:37 PM IDF soldier killed in action today at Kissuim -- name not to be released at his family's request. As has been the case over the past few years, fallen Israeli Bedouin IDF soldier's names are not publicized at the request of their families due to the "dual loyalty" issues that many Bedouins face today. The fear is not from Israel, but from other Bedouin who are less than happy that Bedouin have chosen to fight in the IDF against other Arabs.

Egypt warned European countries on Tuesday to think carefully before sending ships to patrol Gaza's coastal waters to prevent arms smuggling, saying such a move could have significant consequences on ties with Arab states. The warning by Foreign Minister Ahmed Aboul Gheit came after British Prime Minister Gordon Brown said Britain, France and Germany had offered to send warships to monitor and prevent arms smuggling to Gaza and to help consolidate a shaky ceasefire.

7:27 PM IDF General (res) Giora Island states that Humanitarian Aid to Gaza should be only be allowed if the Red Cross can visit kidnapped IDF soldier Gilad Shalit. There's no reason to open the gates of Gaza while Gilad Shalit is held prisoner. (NFC)

6:53 PM U.S. Secretary of State Hillary Clinton said on Tuesday that Israel had a right to defend itself and that Palestinian rocket attacks on the Jewish territory could not go unanswered.

"We support Israel's right to self-defense. The (Palestinian) rocket barrages which are getting closer and closer to populated areas (in Israel) cannot go unanswered," Clinton said in her first news conference at the State Department.

"It is regrettable that the Hamas leadership apparently believes that it is in their interest to provoke the right of self-defense instead of building a better future for the people of Gaza," she added.

Now, if only George Mitchell felt the same way, Israel could sleep at night.

6:37 PM Reports that IDF tank columns are now operating in the Gaza strip in multiple locations.

6:31 PM Photo of the Hamas Harley motorcycle, targeted by IAF rockets in retaliation for this morning's attack on IDF soldiers.

6:19 PM Environmental Unease over Tungsten - not as inert as previously thought. However, I don't think Hamas shares our concern.

6:16 PM Due to an area-wide power outage at the Muqata, we were unable to view the 6 PM Israeli election ads on Channel 10 Israel TV.

6:04 PM Defense Officials believe that attack on IDF forces today at Kissufim was not carried out by the Hamas terrorists, but by Islamic Jihad terrorists.

What a lovely mosaic of terror we have in Gaza.

A peace campaigner on hunger strike over the situation in Gaza vowed today to continue her protest indefinitely as she delivered a petition to Downing Street.

Maria Gallastegui, 50, is campaigning for Prime Minister Gordon Brown to speak out against Israel's blockade of the stricken region.

The full-time peace campaigner, who lives in a tent in Parliament Square, has been on hunger strike for 16 days and says she will go on indefinitely.

5:10 PM Walla reported as well; Islamic Jihad in Gaza announces that "the 7 day cease fire is over, and we will continue resistance if even one centimeter of Palestine is occupied" 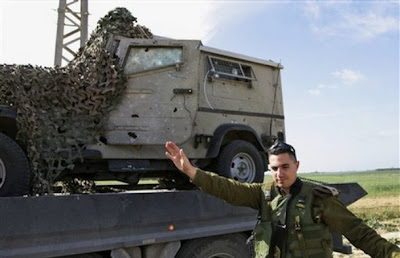 4:40 PM Photo of IDF "Sufa" armored jeep which was targeted this morning by Hamas.

An IDF tracker was killed, an officer seriously wounded, and 2 soldiers lightly wounded, when shrapnel blew through the armored protection of the IDF jeep. (source)

As the IDF continues it's investigation into the attack this morning which left an IDF tracker dead, an officer seriously wounded, and 2 other soldiers lightly wounded, senior IDF officials say that a disproportionate response against Hamas is needed. (ynet)

4:16 PM Released for publication: All communities in Southern Israel within a 40 kilometer radius of Gaza have had their Air Raid sirens reconnected to the IDF rocket launch detection system. (source)

"We expected France, whose motto is 'liberty, equality, fraternity' to send hospital ships to treat the children burned by banned weapons or to set up a humanitarian bridge...rather than deploy a navy ship to reinforce the blockade," Haniyeh said in a statement.

The Germinal frigate has been deployed to international waters off Gaza to battle arms smuggling to the territory.

3:47 PM The Muqata blog received an official request from a representative of the Israeli government to post the following video on behalf of LIBI -- the fund to help IDF soldiers.

There isn't an IDF soldier around who does not appreciate the small perks that LIBI provides -- be it at the field going into Gaza (towels, hats, gloves, thermal underwear, and food), or even the care package that every IDF single IDF soldier receives upon induction into the IDF before Basic Training. (I still have my LIBI knapsack somewhere).

This morning, an IDF tracker was killed and 3 soldiers were wounded.
Two mortars were launched at the Western Negev (no injuries or damage)
No rockets were fired at Ashkelon today, but the IDF is operating closeby (which would explain the sound of rocket/mortar fire).

3:32 PM The wounded newlywed IDF soldier is currently in surgery to remove additional shrapnel from his head. His name is Aharon Yehoshua ben Chaya Shoshana.

I assume they would have said the exact same thing about the attack on IDF soldiers by Kissufim, but unfortunately, you can't easily cover up a dead solider and 3 wounded.

3:13 PM In what is swiftly becoming a sad joke, Hamas shot another rocket at Ashkelon around 3 PM, landing in the Southern Industrial District. Israel's recurring denials of such rocket attacks over the past week will only be to Israel's detriment, as George Mitchel planned arrival in the Middle East approaches.

Israel's failure to harshly retaliate for any of the rocket attacks (which have been hushed up), and the attack on IDF soldiers today in the Kissufim area which left one dead and 3 wounded, is first and foremost the failure of Israel's government. Ehud Olmert, Tzippi Livni, and Ehud Barak do not deserve to see the light of day -- their collective failure of non-response to continuing Hamas terror reduces the expensive deterrence purchased at the painful expense of the lives and blood of IDF soldiers during the Cast-Lead initiative.

Israel needs to strike back today and strike hard today. The cease-fire deniers will blame Israel regardless, so we must bolster our deterrence, and hit Hamas painfully.

Any other message will prove that terror pays and Israel does not deserve sovereignty as an Independent State.

The War Banner is back up -- let's hope Israel has enough sense to do the same.

"7:27 PM IDF General (res) Giora Island states that Humanitarian Aid to Gaza should be only be allowed if the Red Cross can visit kidnapped IDF soldier Gilad Shalit. There's no reason to open the gates of Gaza while Gilad Shalit is held prisoner. (NFC)"

Nothing further need be said.........other then no humanatarian aid until Shalit's release - finished, final! Very simple ....If this isn't followed through as written above then I give up......
az

If you are plugging LIBI (which does good work but has tremendous overhead), please also plut Yashar LaChayal, which, as its name says, gives everything straight to the soldiers. Administrative costs are covered by a separate donor.
http://www.yasharlachayal.org

Taking bets on the name of the next IDF operation against Gaza. I think it could be called "Blooming Almond" (Shaked Pore'ach), in honor of the upcoming Tu Bishvat holiday.

I think "Eretz M'shava'at" would be much more appropriate.

Is Peace Out Of Reach? Video - CBSNews.com

For those that didn't see 60 Minutes on CBS TV, Sunday night this is a MUST SEE.......link on to the above.
az

Linked your post (re: LIBI) in mine, here.
I look to your blog for up-to-date news on the goings-on in Israel, war or not. כל הכבוד.

Don't know if that link above works. Here it is in full:
http://lady-light.blogspot.com/2009/02/libi-supports-our-kids-we-should.html