Note: Using the "Refresh" (F5 key) command in your Web Browser will show you the latest updates -- Refresh on an Apple/Mac is apple+R.
Additional New posts from today can be found below this post.

4:02 PM Shabbat Shalom -- a Restful, Peaceful and Quiet Shabbat weekend to all.

Signing off till Saturday night.

3:51 PM 3 rockets landed in Ashkelon minutes ago, no injured or damage.

3:49 PM Video from GRAD attack in Ashdod today (over 20 people in shell shock)

3:03 PM At around 4 pm Israel time we will be signing off for the Jewish Sabbath and will recommence blogging after the Sabbath's departure on Saturday night. We pray for the safety and welfare of our soldiers in the field (and civilians in the home front) and wish our soldiers success in their missions over the weekend. May we see kidnapped IDF soldier come home soon safe and sound, along with the defeat of Hamas.

2:59 PM 2 rockets on Ashdod - lots of damage, one civilian wounded. 2 rocket at Kiryat Gat - 2 civilians wounded. Sirens in Be'er Sheva - no rockets landed in the area.

11:35 AM The photos posted below from the IDF spox are from yesterday, not today (and they even appear in yesterday's post) Sorry.

11:34 AM Reuter's Photo: (on the left) Hamas shooting a rocket at Israeli civilian targets, (on the right) IDF shooting at Hamas terrorist location. 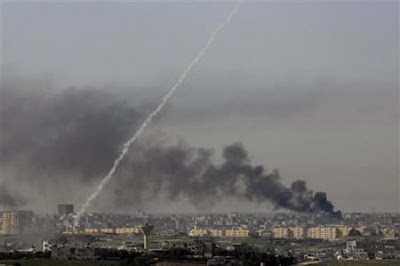 11:18 AM NRG interviewed 2 of the 250 captured Hamas terrorists. They expressed total shock at Israel's reaction to Hamas' breaking the "ceasefire" over 7 weeks ago. "We never imagined Israel would react like this...we thought at worse a few bombs from the air, a small incursion, and that's it....what's gotten into Israel?"

They think its totally normal behavior to shoot rockets at civilians and for us not to react. Hopefully, they've learned a serious lesson.

11:15 AM For those of you in Southern Israel who are still having problems with your car alarm remote controls (IDF counteroffensive interference in Gaza), a simple solution is to disconnect your car battery for a minute to allow the alarm to reset. 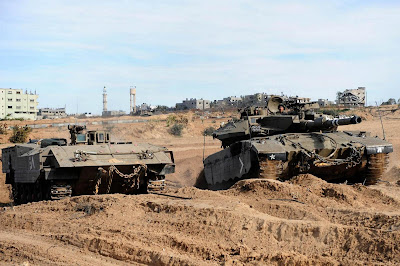 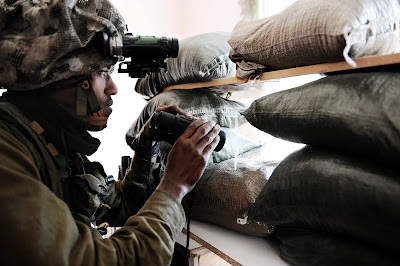 8:05 AM There will be a protest today opposite the Kirya (military HQ) to demand that Gilad Shalit be released (or freed) before any ceasefire may be implemented.

7:58 AM Here's something out of the blue (and to be praised)... More than 20 prominent British Muslim leaders have signed a letter denouncing the rise in anti-Semitic attacks resulting from Operation Cast Lead and calling on Muslims to help prevent attacks on Jews in the UK.
Read more on the JP.

2:42 AM For medical students or professionals in particular: The Lancet (one of the most prominent medical journals) printed a "Medical Students' Letter of Solidarity With Gaza", and a group of students in Einstein have written a response which they wish to get published as well, and need as many signatures as possible (before motzei Shabbos, so it can go in this week):

A petition entitled "Medical Students' Letter of Solidarity with Gaza" has recently been circulated among medical students and was published in the Lancet. In light of the complexity of the situation in Israel and the Palestinian territories, and the recognition that the civilian population of both nations are suffering, please consider the following letter, also to be published in the Lancet, which declares solidarity with all those who suffer in this conflict, and presents a more balanced picture of the situation, as a more appropriate representation of the medical community's commitment to the alleviation of human suffering.

Please join us in signing the letter and disseminating it to your medical peers: http://tinyurl.com/8ue8cw

In other medical related news:
Nefesh B'Nefesh has restarted their special Aliyah packages for doctors. This package includes special grants and assistance specifically designed for doctors who want to make Aliyah, so if you are a doctor reading this blog and are at all interested in Israel you should check it out (and sign the petition mentioned above).


1:41 AM It's a new day. As we reported yesterday, there is talk of a cease fire to begin within 72 hours for a period of two weeks.

Can you imagine anything so ridiculous?

Has Hamas been defeated? Have they stopped shooting? Have they released Gilad Shalit? Will they be prevented from rebuilding their military? Will they be disarmed? Are they still actually going to remain in power? Have they surrendered? Is Israel accepting a State of Hamastan? You know the answer to all those questions.

And all this just in time for Israeli politicians to get in nearly a month of campaigning ahead of elections.

I agree with you :

a cease-fire would be a crime.

Israel has to defeat Hamas.

Otherwise, Israel will have to wage another war against Hamas in a few months.

By the way, your site is excellent.

If the politicians put their self interest above Gilad Shalit, I shall put my self interest first and stop supporting Israel, politically and financially.

No Shalit, no ceasefire!

I like that letter from the Einstein medical students, very much. I have posted the link to it, on my Facebook site, under the heading, "The Israel/Gaza war in a nutshell".

israel laknatullah. may u rot in hellfire, amin.

About the med students' petition, see Debbie Schlussel - it's mind-blowing.

The IDF needs to be patient, methodical, thorough, and NOT RUSH. Haste is deadly for an army, and there is no good reason for it.

Tell world opinion to "f@ck off," and complete this mission properly, and without unneeded risk to these fantastic heroes.

Ma Sands and Yael - Thank you. Does anyone have Debbie Schlussel's email to send her this Einstein letter?

Ma Sands - Yeah, right after posting I went back to her site, found it in two seconds. Thanks :)

"2:42 AM For medical students or professionals in particular: The Lancet (one of the most prominent medical journals) printed a "Medical Students' Letter of Solidarity With Gaza",..."

Well, The Lancet DOES have it's "reputation" to uphold, after all.

And the Einstein students are making a serious error, because by being "balanced" they don't confront the fact that it was the "people" of Gaza who voted Hamas into power, many of whom are as bad as they. To sympathize with an enemy people is foolish, and ESPECIALLY when they aren't suffering. Pretty much the only ones dying are Hamas and related terrorists. The few civilians who are being hurt should not be a cause for stopping the war, which is what our enemy wants.

I REPEAT. THERE IS NO LARGE SCALE SUFFERING - NO HUMANITARIAN CRISIS.!"

Is that a picture of Abu Sharach in heaven with two of his 70 virgins?