Saving a life in Southern Israel

Latest war updates for Thursday, Jan. 1 just below this post.

Many readers know that Jameel works as a volunteer medic. But now, let me give you some more information.
Jameel volunteers as a medic with United Hatzalah of Israel.
United Hatzalah of Israel is an all-volunteer, non-profit medic (EMS) organization.
The primary role of Hatzalah volunteers - trained and certified as EMTs, Paramedics and MD’s - is to provide an immediate response within 2-4 minutes from the onset of an incident. "First on the scene, first to save lives". 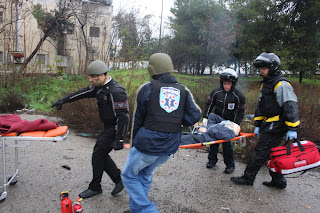 There are more than 1,000 volunteers around the country on alert 24 hours a day, 7 days a week, 365 days a year.
The secret to Hatzalah’s success lies in the widespread geographic distribution of their first-response volunteers.
Currently many of the volunteers are working around the clock down south saving lives as Israel faces constant rocket attacks. As they too face the constant threat of rocket attacks. 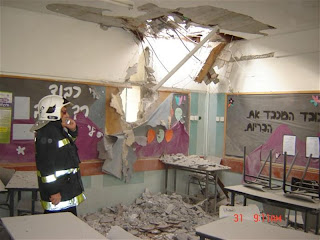 While these volunteers don’t take salaries, saving lives does cost money - there's equipment, fuel, oxygen, flak jackets, helmets, communication equipment, and more.
With the war going on, they are burning through resources at a fast pace and need donations to keep their life savings work going on. 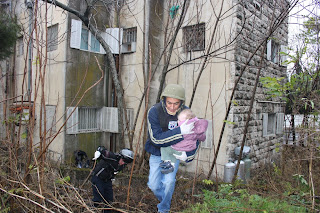 Any and every donation will help save a life in Israel.

So Jameel, maybe you can answer a serious question I have. It also effects where I direct my limited Tzedakah funds. Why is there a need for Hatzalah, in addition to the well established Magen David Adom?

Way back when, MDA covered the needs of Israel pretty well. From the Golan to Eilat, and the Yarden to the Med. At some point, when I wasn't looking, Hatzalah sprang up. Now, it seems to me that Hatzalah is duplicating efforts and 'competing' for resources. How and why did this come about?

MDA and United Hatzala work together -- in fact, you cannot be a Hatzala volunteer unless you are certified by MDA and volunteer with MDA. (I volunteer for MDA, by being an MDA ambulance driver).

However, Hatzala is the organization that provided me with equipment and 24/7 cellular (meers) radio service. The radio on my belt is paid for by Hatzala, as is the medical equipment in my car; Basic Life Support, Oxygen, and an Defribrillator.

Hatzala helps expand the range of volunteers for MDA, and allows for a quicker, "first response".

Besdies ambulances, MDA handles a national infrastructure of command centers, the "101" phone dispatcher (like 911 in the US), and training.

So the 2 organizations are very important, and they compliment each other....and I volunteer for both.

It would seem to me that Hatzalah is a complimentary rapid response citizen unit to the more official MDA. While the MDA handles a large scope of services, the specialized focus of Hatzalah should allow it to excel in it's first-response area of expertise. Specialization always provides for the highest degree of skill and efficiency. That being said, it would indeed be a duplication of effort should they try to expand into the full range of services that the MDA provides and is responsible for.


One of the aspects of focus that seems to separate Hatzalah from the MDA is the decentralized model of using on-call citizens where they live and work. This type of distributed network is a brilliant supplemental system to regional level medical services, and does not compete with it, but rather adds to it by providing smaller, faster "nodes" of localized service that can respond faster than a centralized service. By using people "where they are", it opens the door to service to thousands of people who are already "onsite" in various locals where emergencies occur.


Indeed, in reading Jameel's comment, it would seem to me that the Hatzalah model allows him to serve the people at a personal level, on-call where he happens to be at any given moment, beyond his more general MDA service. In a way it is like he spends part of his time as a centralized resource (MDA ambulance driver), then converts into a "field" resource where his normal life places him out in the world almost like an MDA person "on patrol". In this sense Hatzalah would be a natural extension of the MDA, and it's easy to see why Jameel is involved with both. The fact that Hatzalah is self-managed from a volunteer organization means a negligible expense structure that is of tremendous benefit to the MDA, who likely could not afford to organize, support, and maintain a similar "extended force" of their own.

“In order to understand the Joseph story in some historical context, one has to be aware that Egypt was invaded and conquered by Asian nomadic people, the Hyksos, who introduced the chariot as a war weapon. These Asian conquerors (they ruled for more than a century) were generally detested by the native Egyptians. Egyptians were an agricultural and highly class conscious people who disdained the Asians and their flocks. The latter smelled of the animals under their care, and the Egyptians wouldn't eat with them. The Pharoah of the Joseph story was, apparently, one of the Hyksos rulers. That is why he had no compunction about making another Asian (Yosef) the viceroy. That is also why Yosef regulated the Egyptian economy so as to increase the power of the friendly Pharoah. In the end, Yosef's reforms were counterproductive after native Egyptians overthrew the Hyksos rule. Then the Asians in Egypt were hated more than ever, and the later Pharoah's scheme to enslave the Israelites met with, apparent, approval.

wow they are doing really a marvelous job.i hope this type of service will come to my country as well and i don't hesitate to be a volunteers there.