CLICK HERE TO GO TO DAY 7 OF THE GAZA WAR

Nadia Matar's trial for "insulting a public official" is on hold. In her incendiary letter written 3 years ago against certain government officials involved in the Disengagement from Gaza, Matar warned of the bloodshed Israel will face due to the Disengagement. Ironically, the trial was put on hold after the lead prosecutor was called up for emergency reserve duty in the Gaza war.

9:28 PM Gaza City shelled as the IDF hunts down an Islamic Jihad cell.

9:10 PM Arutz 1 is reporting that there are at least 60 serious warnings for terror attacks in Israel.

9:01 PM Earlier today the house of Hamas brigade leader Nabil abu al-Amrin was hit in Gaza city. The house was used as storage for large amounts of arms and amunition, with many secondary explosions being heard.

8:50 PM And we're back...Sirens by Ofakim and rocket launched in that direction. Update: Grad/Katyusha rocket lands in open field near Netivot.

6:03 PM We'll be taking a break for a while. Here's hoping the evening will be quiet.

5:38 PM Rockets in the direction of Ashkelon.

5:05 PM Just to give people an idea of how the Israeli Air Force works, they use a method called "Knocking On The Roof". There are several steps...
1. The AF calls the house they're about to hit that they are about to bomb it.
2. The residents send all the women and children to the roof of the building with the understanding that the AF won't strike civilians.
3. The AF has developed a small missile that creates a small non-lethal explosion without shrapnel to scare off all the civilians.
4. When they have left the area the building is hit with the big guns.

5:01 PM IDF called Nazir Rayan to tell him that they were about to bomb the site. He decided to stay in the house with his family and people. 10-16 killed in the attack. 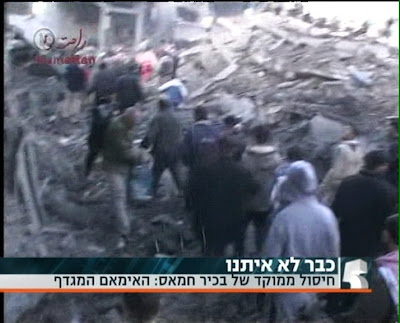 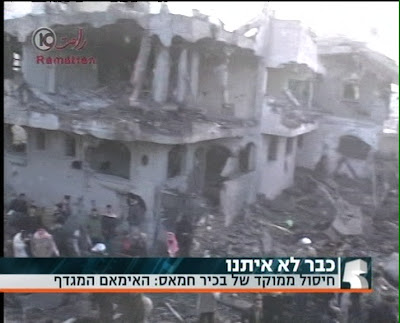 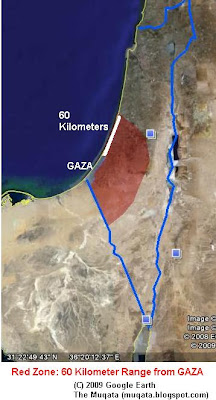 The following list is far from exhaustive and contains a list of cities...and well known places
that are now within the 60 kilometer range of Gazan rockets.

4:22 PM Sirens going off in Be'er Sheva. IAF striking Gaza at this moment.

3:30 PM Rockets in Ashkelon and Ashdod. 2 rockets land in the Ashkelon area.

3:18 PM IAF has killed Nizar Rian, a high ranking Hamas official as well as others. (Jpost)

2:55PM Reports of alarms in Ashdod.

2:12 PM Palestinian Taxi attempts to run down Jewish teenagers outside of the West Bank (Shomron) village of Qarnei Shomron. No injuries -- as the 2 teens escaped harm. IDF and Israeli police searching for the vehicle. 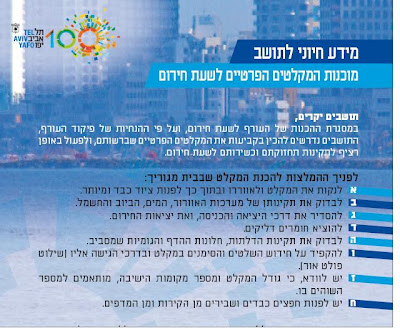 1:36 PM Another school in Ashkelon hit by rocket.

1:16 PM Sirens sound and rocket falls in Ashkelon. No report of injuries.

1:13 PM IAF video of air strike on mosque that was being used to store rockets.


1:12 PM Steps are being taken due to worries that building hit in Ashdod might collapse.

1:05 PM Hamas takes responsibility for rocket in Ashdod. Mosque where terrorists where hiding out hit by IAF fire. 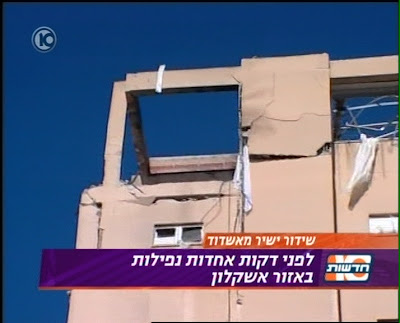 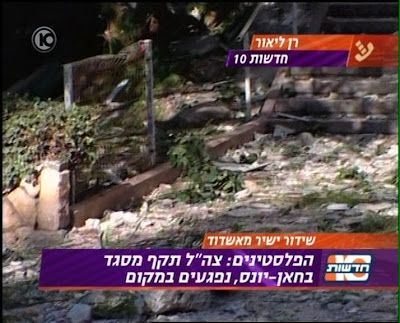 1:01 PM Sirens in Ashkelon and Ashdod at this moment.

12:53 PM Despite "relief" agencies clamoring to allow humanitarian aid into Gaza, Officials for the UN's World Food Program contacted the IDF on Wednesday and said that it would not need to transfer more food into Gaza, since its stockpiles were full and would last for another two weeks. (source, JPost, Hat-tip, MC))

12:40 AM Reshet Bet reporting that Hamas fired a rocket with 60Km. range.

12:38 PM Sirens in Ashkelon and the Eshkol region.

12:16 PM Direct strike on building in Ashdod. Emergency crews going from floor to floor checking for wounded. No wounded found (as of posting)

12:03 PM The south-wide drill of the Emergency Alert System was supposed to have sounded sirens everywhere from Gedera to BeerSheva. Unfortunately, there were no sirens in Beer Sheva...IDF looking into the problem.

12:00 PM Two rockets fall near Be'er Sheva. A total of 8 rockets have been fired so far today.

11:28 AM Palestinian sources claim that a caravan of vehicles has been struck by Air Force fire.

11:03 AM Israel Radio Channel B (Reshet B) surreptitiously stated that one of the Grad/Katyusha rockets shot at Israel yesterday landed 50 kilometers from Israel. I will be providing an updated map later with the newly included communities.

10:57 AM Israeli Arabs in Yafo (Jaffa) throw rocks and curses at IDF Radio soldiers. The IDF radio station is located in Yafo, and since the start of the war, Israeli Arabs have been throwing rocks at the Station, and cursing the IDF soldiers and employees who work there. The IDF has beefed up security by surrounding the station with armed soldiers from the IDF Nachal Brigade (source, NRG in Hebrew)

9:39 AM Israel working the hi-tech end of things.

9:34 AM No signs of a truce on the horizon. Israel reject French call for "humanitarian" cease fire. (source CNN)

9:30 AM According to Arab sources 400 terrorists killed in Gaza so far.

9:26 AM Reports of anarchy and looting in the streets of Gaza.

4:30 AM Once more, a quiet night in Israel, not so much in Gaza. A large number of Government/Hamas buildings hit in the Strip. The Legislative Counsel, Ministry of Justice and other buildings bombed.

Wherever I am, my blog turns towards Eretz Yisrael טובה הארץ מאד מאד
Posted by Litvshe

I never realized how biased CNN was until I sat watching them on TV. Their questions to Arabs were meant to open doors for anti-Israel statements while questions to Israelis were meant to challenge, e.g. "Have you seen the pictures of Gazans having to dig for bodies w/ their hands?" One propagandist, I won't call him a journalist, tried putting a spin on the Gaza campaign by calling it "the new Palestinian uprising."
They've devoted numerous articles & videos on their website to worldwide anti-Israel demonstration but I having seen them show any that were pro-Israel. They claimed that Israelis was split on the Gaza campaign by quoting an article in Haaretz that was so anti-Israel it could have been written in Damascus. (I wonder if Barak will call him a traitor, or does he only call nationalist Jews in Yehuda & Shomron.) Dispersed among the numerous pro-Arab articles & videos on their web page are a relatively few that can be deemed neutral or pro-Israel.
Last night, CNN had their medical commentator describe the physical trauma caused by Israeli bombs.
Oh yes, CNN also has a website in Arabic for its arab allies.

Ezzie,
We have a group of people blogging. I do the morning shift as I'm an early riser. Jameel goes to bed much later then I do, taking the night shift.

I usually do the 10pm-6am shift, and random times throughout the day when everyone else is too busy (but I keep falling asleep on the job - I hope they don't fire me).

Keep up the good work over here. Our thoughts and prayers are with the IDF and all the good people of Israel.

50 km FROM Israel? Where did it land?

And thanks for the updates!

Thanks so much for continuing these updates!

I don't understand IDF phoning target to be hit. Yeah. It's nice for the PR to have the 'civilians', i.e. the terrorist's family get out but the terrorist targeted can also escape b4 the strike. Better to simply blow him away & worry about PR later.

Where did you get the 60 km figure from? If you got it from the radio, do you know where they got it from?

(I'm in Gush Etzion, just about 60 km from Gaza, so I take a personal interest in this question...)

Haha Nizar Rian was a loser and he died a loser!!

D.C. It was on the radio. They didn't say where it hit though.

If you are on the Elazar side of highway 60 then clear out your bomb shelter, if you are on the Efrat side of the highway then invite your friends from Elazar over to the safe side of Gush Etzion.

I can't believe the Tel Aviv iriya didn't bother to remove the exploding "100" logo on the rocket leaflet!

(Sorry - Litvshe, since I don't have your email - knew all of y'all were blogging, didn't realize until after that you'd started that post. Yiasher Kochacha.)

Missiles hit the town of Gedera this morning, and infant was hurt. Please list Gedera in your blog!
Thank you for keeping this up. Renae...

See day 11 -- or go to muqata.blogspot.com and press refresh in your web-browser