Did you pack that Mac?

So here's the background.

Guards think, did naive or anti-Israeli American receive Mac from terrorist in Arab country, given map describing where to bring it?

Blogger told to wait, but then wanders off without Mac, leaving Mac unattended. 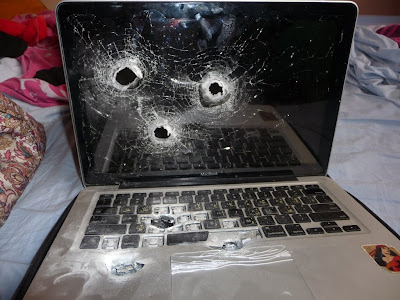 I suspect that it was the map that made them suspicious.

>handwritten map of Jerusalem with central bus station marked off

yes, i can see how that would set off alarm bells...? i mean, what innocent tourist would be concerned about finding the central jerusalem bus station?

and more importantly, why would the owner of a macbook have anything handwritten in his posession? :) my i'm amusing.

BS"D Good job, our guys. Will this mean that ibn Barak and Malevory will demand these security points be closed down, as well? After all, it protected us...

If this guy was so "naive" as to try to just waltz in here like that and not expect repercussions, he deserves it anyways. Our security comes first...next time let him stick with "Macdonald's"

That's not quite what happened. She simply left her bag unattended. The team that blew it up had no idea about the other stuff you mentioned. Other than the cool images of the messed up Mac, this is a non-story.

thanks for your take on the story. This blogger has been propagating her version.

Jameel- your blog goes downhill each day that you let Joesettler rant with his ridiculous, and in this case clearly false, propaganda.

This post is propoganda just as much as the stuff being spewed from the left is. Awful. Deleting from blog roll.

I don't care if every single fact you stated was true (which I doubt), there were better ways to deal with the situation than shoot up the Mac.

Can someone explain why mac's are considered suspicious in Israel?

Sussman is a Jewish name. the Frisco, ISM types send Jews to Israel to cause trouble because these kapo types are more likely to get past the border police than gentile ISM types

There were better ways to deal with it, but they were kind and ethical and only shot the Mac.

Every fact came from the Blogger's blog. If the fact's are false then that blogger is lying.

Did the blogger say that she was "carefully separated" from her Mac? I didn't see that on her blog.

I went inside to check on my bag. I had left it unattended, where they instructed.

You could be right. It seems they told her to wait, and she decided on her own to walk away from it, leaving it unattended - and thus a very suspicious object, which would then get blown up.

Are you certain that that was a MacBook? It doesn't look like one to me; maybe a very ancient one?

BTW Macs are not suspicious items in Israel; Macs are great!

Another thought, 99.9% of MAC owners NEVER wander away from their laptops, notebooks, iMACs or anything APPLE. Indeed, a strange story ... or maybe just a strange person!

Had Rachel Corrie not played catch with tense soldiers and an armor-plated caterpillar in a war zone, while her ISM co-conspirators did their damndest to create an incident, the stupid woman might have still been alive. It is her companions who are to blame for what happened in any case.
War zone, dummy - NOT a safe place to play at middle-class revolutionary.

Frankly, anonymous, I have no sympathy whatsoever for any of the member of the ISM and similar organizations. I hope Paul Larudee is the next one flattened. Heck, put three bullets in the bastard to keep him from wiggling while a tank goes over him. Twice.

And you, you "anonymous' troll, also deserve the same fate. As do Rachel Corries' loathsome parents and fanclub.
Get stuffed, dill head.

And further, anonymous dill head, I also fervently wish the same to happen to psychopaths such as many of the European socialists - Anja Meulenbelt is a name that particularly comes to mind.

If her sneering sadistic ponim were permanently smeared across the asphalt of Gaza, Gaza might be worth visiting.

Is this the real BotH? Itdoesn't sound like you
Bay types are central casting for ISM

Is this the real BotH?
Indeed it is. Still tense and angry after the confrontation with the Berkeleyites and far-left outside of the hotel where the AIPAC dinner was held on Tuesday.

At times like these, there is a curdling of the milk of H. K.

And we have a history with the Corrieites here in the Bay Area.

It sounds like way overkill on the part of border police. The standard procedure for a suspect computer is to ask the owner to turn it on. Why didn't they just ask her to do that if they suspected a bomb?

It sounds like a pissed off guard got carried away. This is not how they regularly deal with suspect computers where they know owns it (and therefore, it couldn't have really been a chafetz chashud).

It would be helpful to explain to those who aren't familiar with life in Israel that all suspicious packages left in public places are promptly blown up in a controlled manner by the police, after the are is cordoned off and the owner doesn't show up.

I personally had my army bag ("chimodan") blown up at the central Jerusalem bus station after I forgot it inside the bus (3 weeks on sentry duty with 3-4 hours of sleep per day turns one into a forgetful zombie). Thankfully it contained only dirty laundry and uniforms. When I came back to get it from the lost and found the next day the bag looked like a mortar had landed on it.

I have no idea what happened to the woman's Mac and have no intention of sifting through all the mean-spirited and ignorant posts of the woman in question to find out. But if she left the computer unattended it shouldn't surprise anyone that it was blown up.

IF all the story is is that she left her computer unattended, then this blog is, indeed, propaganda. She's got every right to complain about her property being destroyed, and is all the more likely to if she already holds certain prejudices against Israel.

Tafka PP; Guess what? Security forces have blown up/shot at tefillin as well which was unattended.

Is that propaganda as well?

Anonymous @ 3:13 PM: This post is propoganda just as much as the stuff being spewed from the left is. Awful.

Um... you have apparently missed the fact that this story was "spewed from the left". It was reported on the blog of the radical leftist blogger to whom the alleged incident occurred.

And how, exactly, is it "propaganda"? It is an incident that occurred, according to the very blogger being cited.

Was is also "propaganda" when the original blogger reported it? Or only when JoeSettler repeated it?

Ouch! It is a painful fate indeed to be punished by deletion from the blogroll of the world famous "Anonymous".

Once again, the allagations come from the person to whom the incident occurred, not from the post here on the Muqata.

Anonymous @ 3:13 PM: ...there were better ways to deal with the situation than shoot up the Mac.

I see. And since there were "better ways" to deal with it, reporting what actually, in fact, happened therefore constitutes "propaganda"...?

avi: I personally had my army bag ("chimodan") blown up at the central Jerusalem bus station after I forgot it inside the bus...

Jameel: Guess what? Security forces have blown up/shot at tefillin as well which was unattended.

Oy! Why are you informing us about these things? Don't you know that telling us that these things happened -- even though they're true -- is nothing more than evil "propaganda"?!

If you don't put a lid on it, "Anonymous" might delete the Muqata from his blogroll again...