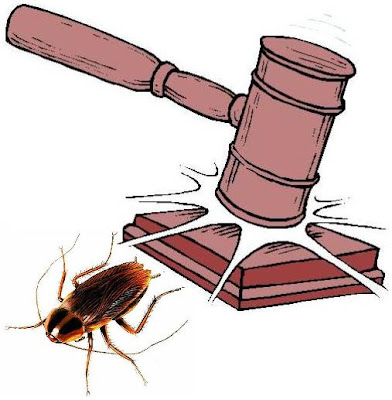 They say the wheels of justice turn slowly, but today's delay in a Tel-Aviv Courthouse was unexpected. The reason: A cockroach caused a panic in the courtroom, and the proceedings were abruptly halted.

It all started out as a regular hearing on the extension of holding time for a suspect that was brought to court. During the proceedings, the court stenographer started to shriek. A quick check revealed her screams were not due to an escaped fugitive or a rather harsh sentence, but due to a brown cockroach under the frightened stenographer's desk.

Even Judge Jilia Ravid, who is considered a rather hardened judge, fled the courtroom to her private chambers for 5 minutes, till the roach was apprehended and removed.

The court policemen personally apprehended the roach with his bare hands, and bravely removed it's squashed corpse from the courtroom.
source in Hebrew, Mako/Channel 2 News.

Eeeeek...I totally sympathize with the Court, and admit that I do get hysterical if one of those "intruders" finds it's way into my abode! My husband is the "demolition team" and knows exactly how to do his job! Every August witnesses these awful intruders. I can't even look at your blog without shrieking (a bit).

Don't ever do this again! I see you like to "surprise" your readers

Jukim are intense. We moved to the States from Israel when I was 5, so I don't have many strong memories, but one of the more salient ones is my mother screaming one night and me coming to the kitchen to see what was wrong, and finding her sweeping a mega-juk outside with the broom. Ugh.

That's one way to clear any room. Still, looks like the courtroom's going to need to hire a building inspector from melbourne to check for anymore pests.