As if flying wasn't an already awful experience, yesterday's attempted terror attack is going to just push it over the edge.

What's next for security measures? Drug all the passengers throughout the flights to keep them sedated and in their seats? Regular strip and cavity searches for 80 year old ladies?

Do you really want to fly anymore?

Unfortunately, it all too often seems that governments (besides Israel) either don't get security, or don't want to get security.

The US was aware of yesterday's terrorist.

The US was warned of him by the man's own father who grew concerned with the ideological direction his life took after learning in Britain's schools (a breeding ground of Islamic extremism and anti-Semitism, for sure). But the data wasn't "concrete" enough to set off warning bells or put up alerts on the no-fly list, so his name wasn't flagged when he tried to fly - even for an additional inspection.

Instead the TSA and other international governmental agencies prefer to be politically correct, rather than safe - and as a result harass obviously innocent fliers (such as babies in their mother's arms) rather than those strangely acting people who look clearly suspicious to everyone else around them (and I've seen this myself).

Now all travelers will now be forced to undergo even more time-consuming, inconvenient and far more intrusive searches. Another victory for the Islamic terrorists.


If Israel had had that basic information, the man wouldn't have been allowed on the plane without a thorough questioning and search - if at all. 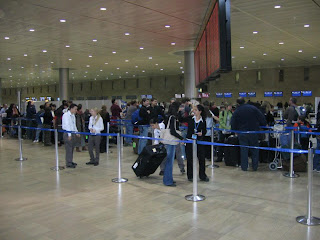 Why? Because people blow up airplanes, not bombs by themselves. Terrorists will always find a new way to sneak a new undetectable weapon on board. But they usually have warning bells somewhere in their background that should light up like a Menorah.

And that's even why Israelis have been occassionally known to accidentally take weapons and ammo on to planes from Israel and the planes weren't hijacked or blown up. Because it's about the people, not the 8 ounce water bottle they are holding.

Which does seem to be the point of it all.

And yesterday the US demanded explanations from Israel for killing 3 (of the 4) Fatah terrorists who murdered Rabbi Meir Chai last week (the fourth is currently being given protection by the Palestinian Authority).

Israel may finally be getting back on track in terms of how to deal with terrorists in the field, while the US and the West still refuse to acknowledge who their enemy really is, and how to deal with them properly.

(By the way, all 3 terrorists had previously been arrested by Israel and released in one of the revolving door confidence building measures constantly being demanded of Israel by the US).

I really feel sorry for anyone that needs to fly during the next few months.

"do you really want to fly anymore?"

We're scheduled to fly cross country in two weeks and I'm dreading the security checks. We once overheard two security officers seriously discussing whether or not mascara tubes should be banned from hand luggage because the wands could be used as a weapon to stab someone with. And then they miss the obvious being so bogged down in the ridiculous.

Would recommend these security people never set foot in a casino because they are going to lose their shirts. They certainly don't know how to play the odds.

And none of the new regulations would prevent the exact same incident - stay in your seat, he was in his seat; no access to hand luggage, it was taped to his leg.

Hey! What happened to that cool new layout I saw this morning?

From my book, The Cabalist's Daughter:

Las Vegas was the safest spot on Earth. Visitors to Sin City were promised zero bombing and sniping incidents for the duration of their stay. This was possible due to the uncompromising security measures the city fathers (or godfathers) imposed on everyone desiring entry.

All personal belongings, down to the arriving passenger’s last stitch of clothing, had to be left in Locker City, a 40-by-40-block fenced facility adjoining Las Vegas’ McCarran International Airport. After stripping and undergoing a full body scan, arriving passengers were given an assortment of disposable undergarments and linen suits in a variety of fashionable prints, comfortable sandals and a lovely boxed lunch, all at the city’s expense.

Las Vegas’ hyper-secure system was the brunt of many jokes, but few visitors to the entertainment Mecca were discouraged by the promise of not being blown up or shot on their vacation. The city’s extremist policy turned out to be cost-effective as well: The price tag on collateral damage incurred from New York’s one hundred annual suicide bombings, as well as many hundreds of sniping incidents, amounted to well above ten billion dollars. Las Vegas’ no-nonsense hospitality went for under half a billion per annum.

Israelis do profile. It saves time and it saves lives. In the rest of the West, political correctness takes precedence over public safety. With all the inspections, Western airlines are less safer than El Al with its focused security checks.

On the other hand Israel gives rifles to Beduin soldiers to take home and shoot each other with, and lets hundreds of captured terrorists free all the time. I guess they make up for it in other areas.

bathroom monitors??? like in an american high school? what does this mean? who does the monitering? curious. if we're all going to be flying naked anyway, i suppose the traditional privacy of the "facilities" becomes a non-issue.

Clearly profiling would help, it does seem to be easier to find a potential terrorist than their weapon and obviously Israel has significant experience in this area. Flying too and from Israel certainly inspires more confidence security-wise and is less of a hassle (no throwing out of medicines and baby milk for example.

However, in Israel we are dealing with a relatively limited number of potential threats, with a limited, well defined motive, a relatively small number of passengers flying each year to and from two airports (one mediums sized, one tiny). Scaling up an Israeli-style airport security operation (guards, trained questioners etc.) may not be doable.

I think you meant to say that the US spends equal resources on each person, without regard to whether or not it is necessary. But why let common sense get in the way of rhetoric?

YR: Correct. I could have worded it better, but obviously the intent was understood.

YB: El Al security is in place around the world at every airport El Al flies out of, not just local Israeli airports. It would appear to be scalable.

The best line on this issue was from security expert Bruce Schneier:
"Only one carry on? No electronics for the first hour of flight? I wish that, just once, some terrorist would try something that you can only foil by upgrading the passengers to first class and giving them free drinks."
see http://www.schneier.com/blog/archives/2009/12/separating_expl.html

Don't blame the US for Israel's revolving door "catch and release" policy. Israel is a sovereign nation and must take full responsibility for the choices its government makes.

The Terrorist unzipped his pants and tried to light the fuse of the bomb he had hidden in his underpants resulting in 3rd degree burns on his "thighs" and a Darwin award!

Richard Reed was called the shoebomber!

WTF are we gonna call this one???

DT: It gets worse. I saw an article that he hid the chemicals in a condom.

"I really feel sorry for anyone that needs to fly during the next few months."

I am definitely starting a Facebook group demanding reasonable security. Please e-mail me if you want to help :)

The general consensus on line seems to be "Crotch Bomber". But since he stored the bomber in his underpants in a condom...

Come on people! We need a little more creativity here.

ewww! that must have been really offensive to his seat-mates....

Joe, you misunderstand me. Obviously I was taking into account all the security checks on all those flying to Israel.

The point is, that the numbers of people flying in and out of Israel is (relatively) tiny compared to other countries facing terrorist threats from the air such as they US and UK. The type of threats and people who are doing the threatening are also far greater in type and in number that those doing the same to Israel.

YB: The point is, that the numbers of people flying in and out of Israel is (relatively) tiny compared to other countries facing terrorist threats from the air such as they US and UK. The type of threats and people who are doing the threatening are also far greater in type and in number that those doing the same to Israel.


Yes, I see your point. In addition to having to worry about the threat from radical Muslims, the US and UK are forced to contend with all the radical Christians...