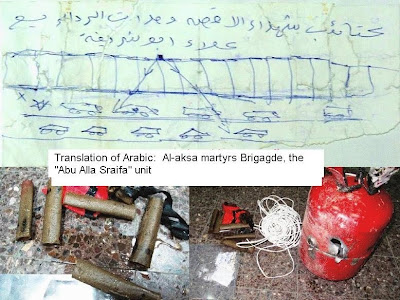 During routine patrols of the highway, IDF and border police found the explosive device and neutralized it before it could go off. In the enclosed instructions sheet in Arabic, the device is placed in a location designed to maximize damage to passing Israeli vehicles.

"Following explosions heard on road 443 on 17.12.09, IDF and border patrol forces searched the area of the village Bir Neballah, south of Ramallah. During the searches, the forces uncovered a roadside bomb, attached to the bomb was a note with instructions on how to use the device in order to cause maximum damage and a message attributing it to a Palestinian terrorist unit. Upon discovery, the device was detonated in a controlled manner by the bomb squad." IDF Spox.

Note: The Al-Aqsa Martyrs Brigade is part of Fatah, and thereby, part of the Palestinian Authority.

PS: I certainly hope this will not be discussed on the Modiin email list, because it took place outside of Modi'in, and as we all know, despite the worthiness of a cause, the Modiin list is not the proper forum for this posting. The Modiin list is only for postings that specifically have to do with life in Modiin.

Thank you for your cooperation."

I'm surprised at your sarcasm, Jameel. It's beneath you.