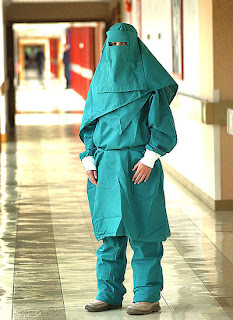 The Palestinian Authority has mysteriously canceled the first ever Palestinian Beauty Contest just 5 days ahead of the planned competition -- the official reason being given is that it conflicts with Palestinian commemorations of the "Cast Lead" operation, though word on the street is that the swim suit competition was the real reason behind the cancellation.

The contest, slated for December 26 will not be held.

The Palestinian "street" also attacked the contest, with PA media outlets depicting the event as a scandalous outrage. On some Palestinian websites, photos of Palestinian suicide bombers were replaced by the contestants.

The contest, slated for December 26, has been officially canceled.

Contestants were supposed to have arrived from Gaza, the West Bank, and Israeli Arab women -- and this was to be a preliminary contest for entry into the "Miss Universe" contest.

Kudos to Ali Waked from Ynet for the scoop.

Talkbacks claim the real reason for the cancellation is a lack of contestants.

Bethlehem – Ma’an – After a wave of criticism, the finale of the first-ever Miss Palestine pageant has been postponed indefinitely by the Palestinian Authority.

The Ramallah Governorate announced on Sunday, “According to the requirements of the public interest, we decided to freeze and delay indefinitely of the coronation of Miss Palestine 2009 that was scheduled to be held on 26/12/2009 in Ramallah.”

The statement said the decision was made out of respect for the anniversary of the onset of the Israeli war on Gaza, which will be marked on 27 December.

But, the statement added, “We encourage such ideas that promote beauty that is committed to age-old Palestinian traditions and values.”

The Miss Palestine pageant generated controversy when it was announced by the Trip Fashion Company earlier in December. Islamist politicians denounced the competition as not in keeping with traditional values.

The project originally had support from the Palestinian Authority. Officials from the ministries of Information and Culture were to help judge the contest, its organizers said.

You know, we have segments of the population who make a habit of defacing posters, threatening boycotts, threatening shop owners and (most recently) vandalizing buses...if pictures of women are not removed. Not immodestly dressed women, mind you. Any women. (Remember the last municipal election when the Haredim objected to campaign posters featuring pictures of -Orthodox, modestly dressed- female candidates?

As such, at least so far as this particular issue is concerned, we are not in a position to throwing stones. Granted, I think the cancellation is insane. But I also think our Talibanistim are insane.

Gila: As long as the "Miss Israel" contest isn't held on a public street (or at Intel on Shabbat) -- the chareidim dont care.

The Haredim have nothing against female beauty. Islam on the other hand, seems allergic to the notion women should even have a public presence altogether.

I understand that you see this as amusing.

What I don't understand is why you would take the time to post such as this.

Is making fun of other people's religion important to you?

Could it be that things like this are why the Jewish people are hated?

The Haredim have nothing against female beauty and/or public precence? If so, please explain: Mehadrin buses, defacing of posters portraying ANY pictures of women, separate sidewalks for men and women in certain relgious neighborhoods, attacks of women in Beit Shemesh, harassment of shopkeepers who display any pictures of women (even if said store is selling, say, makeup) and a general obsession with modesty.

It is not okay when Muslims do this and it is not okay when Jews do this. You do no one any favors--least of all Jews--when you criticise one and whitewash the other. Seriously--in this area, we have enough problems. We need to focus on our backyard. The Muslims in general and Palestinians in particular are not our number one concern in this regard.