The Islamic Times (Iran) made the following outlandish claim:

Secret Agreement between Israel and Saudi Arabia in Tabuk
(Islam Times) – The Israeli army established a military base in Tabuk, which is located in northwestern Saudi Arabia. A number of Israeli airplanes landed in the international airport located nine kilometers away from Tabuk. A number of Israeli soldiers and military equipment disembarked from these airplanes. The Saudi Arabian aircraft ministry forbid all flights on Friday and Saturday. The passengers that were unable to board their planes believe that it has something to do with the Israeli airplanes.

A passenger that was planning to travel from Jeddah to Tabuk stated that the airport officials booked the passengers in four star hotels in order to prevent them from expressing their anger. The hotels were paid for by the government. Saudi Arabia has refused to explain why flights were cancelled on Friday and Saturday.
Saudi Arabia’s measures to allow Israel to use their country in order to harm the resistance movements in the region is something that has enflamed Muslims throughout the world in recent years.

Lenny Ben-David explains why this is patently ridiculous.

Tabuk is located in northwest Saudi Arabia and 800 miles from Iran. It doesn't cut any flying time from Israel to Iran. If -- and that's a big if -- Israel wanted to attack from Saudi Arabia, there are other Saudi bases closer to Iran, such as the Prince Sultan base near Riyadh or the Dhahran base close to the Gulf. And, if Israel plans to attack Iran, and if Israel couldn't accomplish the task with mid-air refueling, there may be other bases in the region that would be better. 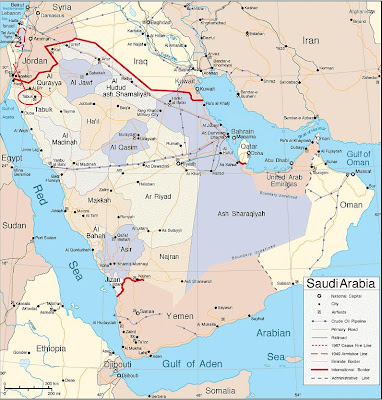 Lenny's right on the money and this story should be relegated to Snopes as urban legend.

No wonder I am-a-dinner-jacket released the lie only in Farsi.

On the other hand, if the Saudis have given them fly-over permission, they don't have to deal with Jordan and Iraq. Additionally, this may be all that the Saudis are willing to give them.

Spirit Master: There are much closer airbases to Iran than Tabuk. If its only 150 km from Israel it really offers no advantage to Israel.

Actually it seems like that timing coincides with the timing the US/Israeli warships were leaving the red sea to go up the Suez Canal. Think they may have done some sort of transfer.

spirit master does have a point.

although they gain almost no distance it does have the advantage of not needing to fly over Jordanian (or Iraqi) airspace.

on the other hand, relying on the Saudis to keep things secret is probably a much bigger security risk then flying over Jordan...

couldn't it just be a convenient, hidden, well-supplied spot for the israelis and americans to coordinate their attack? the advantage to israel is that it's ONLY 150km away. where would YOU suggest 2 of the most powerful air forces in the world get together for the planning stages of the most dangerous military mission of our time? perhaps somewhere closer to the enemy, more obvious? the apparent disadvantages could be a smokescreen. let's see where those ships wind up.

hey, i'm having a conspiracy theory kind of day.