Sometimes there are unintended consequences to one's actions. For instance, let's take USAID as an example.

Now their projects are apparently solely dedicated and intended for the benefit of Arabs only, within the Land of Israel. But sometimes, it just doesn't work out that way. For instance, USAID is investing in road building in Judea. Many of the roads are Jew-free roads, but not always. 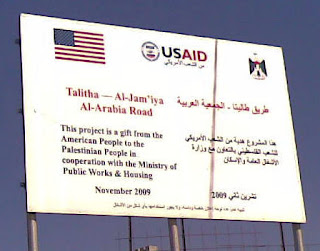 Here's one example from a sign of theirs that says, "This project is a gift from the American People to the Palestinian People...".

Now you probably have no clue what road this is they're repaving, because of the name they made up for it.

Talitha is the short name for the (formerly Christian) school on the road there, and as far as I can tell Al-Jam'iya is some sort of Hamas/Islamic charity involved in education. It's could be a place, but I haven't found it on any map, so I'm not sure.

Anyway, to the rest of the world, it is the Walejah Road, and until the tunnels were built it was one of the main road from Jerusalem to Gush Etzion.

What I think that USAID overlooked is that Jews also use this road regularly. It's a pleasant drive from the Gush directly to Malcha (and the Bibilical Zoo), not the mention Har Gilo to the Gush.

It would have been nice if they could have added a line in Hebrew and mentioned that it's a gift for us Jews too. After all, many Jewish-owned cars use that road every single day.

Anyway, even though USAID didn't mean to fix the road for the benefit of us Jews, we thank you for building a road that Settlers use all the time.

nice one, joesettler. is that your photo too?

No, it's a photo of a sign. I look much less square.

This reminds me of that classic scene from Sallah Shabati ("Meester Rozenbloom, zees eez your forest")

Sshhh! JoeSettler, don't blab this news all over the interwebs, otherwise the USAid people might destroy the road. Or put anti-Jewish road blocks on it or something. Nothing would surprise me.

Do USAID no longer give to Israel?

I'm not aware of any USAID projects in Israel excluding what they are doing with the PA.

Perhaps they realized how many local Gush people are US citizens.

USAID must be pulling their hair out..

As an American, I can tell you that this sign is a complete lie. No clear thinking American would ever give anything to the entity created by Arafat. This fraud may have deceived the liberals, but not the clear eyed conservatives.

I assure all Israelis that any monies given to create a road in Judea and Samaria, was for them and them alone. The fact that a few muslims use this road is an unhappy coincidence.

As an American, I say enjoy and keep safe.