Translated by Jameel @ The Muqata, (with minor additions) from the NRG article in Hebrew.

Among the IAF cadets taking off from the Hatzerim Air Force Base is also "T." Her community is already planning the celebration for Israel's first religious female combat pilot. 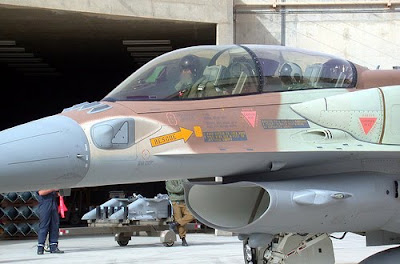 Photo Courtesy of IDF Spokesman New Media Unit.
Every time a fighter jet passes over the religious moshav in Southern Israel, all eyes proudly gaze to the skies, wondering if the jet's pilot is "T" -- a 21 year resident of their moshav, who is on the flight path to make history.

The hardworking young woman recently completed the first year of the challenging, elite combat pilot's course of the IDF and she is expected to complete the course as an IAF squadron combat pilot -- as the first religious female cadet.

"T" stands out among the landscape of the Air Force Base which is home to the most prestigious military course offered by the IDF, both by being a woman and by being strictly religious.

Till now she only wore military issued skirts, which are now being replaced by her flight overalls, and she is careful not to touch any of her male colleagues, due to the Jewish laws of modesty, tzniut. Last week "T" was informed that she has been placed in the combat pilot's track, which will include at a later stage attacking targets dogfights.

Her very presence in the course is unusual, and even her way to the coveted pilot's course was "historical". While most nationalist-religious women serve in "National Service" for a year, "T" decided to spend 2 years doing "National Service" within the framework of a Midrasha (a Jewish studies program for women) and volunteering as a Bnei Akiva Youth Movement "Komonarit" (chapter leader).

"T" decided that her "National Service" was not an alternative to army service and at age 20, she announced to her family that she was joining the IDF and going to the pilot's course, which requires signing on for 9 years of military service.

In her Midrasha yesterday, they spoke highly of a unique girl, whose awareness of contributing to society flows through her veins. "We always knew that she was destined for greatness," revealed one of her teachers, "You need to know her personally to understand what a special and quality person she is, and how much she wants to give from herself." She's a "totachit" (slang for artillery canon) and she always "hegdilah rosh" (was proactive, responsible and resourceful).

"T's" father works in agriculture and her mother, a nutrition instructor by profession, works in her community's local economy. The couple has 5 children, with one of them about to become very famous. Her's community's members closely follow her advancement, and wait for the happy announcement when she finishes the course. The fact that only 1 out of 6 IAF cadets finish the course doesn't worry her many fans; "She will be the first religious female pilot in the history of the IDF. Just as she has made us proud till now, she will continue to do so in the future."

Asked how a religious young woman can combine the difficult physical tasks from the challenging course with the values of modesty and "tzniut", her friends said that "She is a quality person. We are confident that she will also finish the course and make a positive impression on her commanders and the other cadets. She will continue to remain religious as she has been till now, and the course won't have any affect on her religious observance."

The future pilot's family preferred to keep a low profile on the story, and preferred not to speak about it for the time being. "We believe its premature to discuss this now, and we're waiting for her to successfully finish the course," her father told NRG/Ma'ariv.

One of her family members summed it up, "We're all following her progress and happy to hear each month when she's still in the course. It's a great honor for us and for Religious Zionism that she has gotten this far. We hope that she will successfully finish the course and become a pilot. Nothing would make us prouder."
We here at the Muqata blog offer our best wishes to "T", hoping she achieves her dream of continuing to help the Jewish people.


In Israel this summer?
Free Phone Rental
Call the US for the price of a Local call!
Wherever I am, my blog turns towards Eretz Yisrael טובה הארץ מאד מאד
Posted by Jameel @ The Muqata

I never understood why pilots and those of similar elite status are referred to only by a single initial. I mean, it would be one thing if it was really a secret whom the person is, but everyone in this person's town, school, etc. knows who it is, and then people talk, and the circle gets wider and wider.
Seems silly to me.

While its hard to keep secrets in Israel, being referred to by a single letter still makes it harder for the enemy to look them up in facebook or the phonebook...and then target them, or their families.

Yasher Koach! There are times to praise Smart Jews! Israel needs to recognize more of them and bring them to public attention as role models to emulate.

May T do the Jewish people and the State Of Israel proud!

Remind me, why do most dati-leumi women do sherut le'umi rather than army service? Methinks the issues were something other than negiah and wearing pants.

Love this story! Thanks so much for translating and posting. Until the time comes that Israel is completely safe and we don't have the need for military excellence that we do now, I will continue to get a thrill from reading about outstanding young men and young women seeing the IDF as the way to productively channel their excellence.

I wish T. all success.

And kudos to Alice Miller, who, even though she didn't make it through the course back then, blazed the trail, making it possible for T.

curious, it's the people more at risk to be captured that are referred to by initial and have their faces blurred. That way the enemy won't know who they are.

We know one religious female in the airforce who was a helicopter pilot I think, but now has a desk job with "kissui rosh."