The other day I discussed the issue of the Gilad Shalit’s letter after one far left blogger found himself very confused regarding the truth.

The short version is that Gilad Shalit's family offered to support and mediate with the Israeli government on behalf of the flotilla to Gaza, provided that the flotilla “in addition to their demand that Israel lift its blockade they will urge Hamas to allow the soldier to receive letters and food packages from his family and allow international organizations to visit him.”

The Shalit family announced that the flotilla organizers outright refused their offer.

Afterwards, one flotilla passenger, Irish Senator Mark Daly said he was prepared to take the letters to the ICRC or UN representative in Gaza.

Apparently realizing their major PR blunder (one of many since then), the flotilla organizers have tried to use this to “disprove” that they denied the Shalit family request.

Now here is where our Jewish Useful Idiots come into action.

They began to question the account of the Shalit family. They began to say that RW bloggers were telling untruths. They even claimed we merely use newspaper sources for our information (which I think anyone reading the detailed reports we’ve been first to release on this blog, long before the newspapers, know that to not be the case).

So our LW Jewish bloggers decided to get to the bottom of it. The Irish Senator Mark Daly was contacted and he responded.

The blogger writes as follows, Daly said that “he and two of his Irish parliament colleagues sent a letter to Noam Shalit offering to personally deliver letters and packages to the Red Cross in Gaza or to the United Nations Relief Works Agency in Gaza on behalf of their son Gilad. He said that in this letter he also committed to asking both agencies to do what they could to make it possible for Gilad to receive packages and visitors. Senator Daly also said he and his colleagues would "reiterate" their calls for Gilad's release while in Gaza.”

The LW bloggers are buying into this completely, while completely ignoring the very clear and actual differences between what was requested, and what was eventually offered.

It amazes me that these bloggers who will endlessly argue semantics over a single word to try to prove themselves right in any argument appear to be completely incapable of understanding the complete difference here between what was asked and what was offered.

The Shalit family offered a trade, a very straightforward trade:

Shalit requested: The flotilla would officially include as part of their official political position that Gilad Shalit should receive the most minimal of human rights given to any prisoner.

Flotilla refused: They would not include that message as part of their official position.

Daly offered: To take some letters and packages to the ICRC and UN – neither of whom have been permitted to see Shalit in 4 years. He promised that he and his 2 parliamentarian colleagues would “reiterate” their personal calls for Gilad’s release.

The official Flotilla website says, “Irish Senator Mark Daly (Kerry), one of 35 parliamentarians joining our flotilla, agreed to carry any letter and deliver it to UN officials inside Gaza.”


I know I need to spell it out in simpler language for those who willingly refuse to let it sink in, so here it is again.

Shalit asked that the Flotilla to add to their official position the message demanding Gilad Shalit’s basic human rights be granted.

The flotilla refused to add it.

A member of the flotilla agreed (as a PR gimmick) to pointlessly take some letters and packages to organizations that have absolutely no access to Gilad Shalit (and have already received numerous other packages and letters for Gilad that remain undelivered for years). Daly agreed to reiterate a personal message, that has ZERO connection to the flotilla’s official position and message.


I am trying to think how to make this even clearer, but it’s not possible. If someone wants to be fooled, and be a willing participant in this deception, there is not much one can do for them.

Anti-Semites, Jihadists, the radical Left and other who seek Israel’s (and Jewish) destruction are doing their best to delegitimize Israel through lies and deceptions, while leftist liberal Jewish bloggers become their accomplices by repeating those same arguments, even if they believe their intentions are for Israel’s own good. 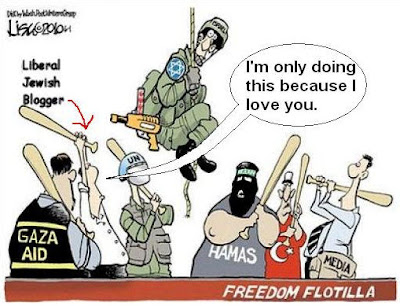 Wow- this is a first for the muqata. An empty post based entirely on hearsay and JSettler paranoia.

Wow. An example that proves the point.

why call them useful idiots?

they are much more

throughout the centuries, the greatest of jew haters has always been the secular jew

say what they are...jew haters

they hate everything about their religion and people

Just come out and say it. DB is an idiot.

there is a reason that the germans preferredLW Jews as kapos

Noam Shalit doesn't need someone with ties to IRA terrorists to take letters to some UN or Red Cross garbage bin.

I'm pretty sure the IRA was disbanded a long time ago. But point taken.

I have a problem with anyone who identifies themselves as Jewish, then makes their life cause the bashing of other Jews or Israel.

A member of the flotilla agreed (as a PR gimmick) to pointlessly take some letters and packages to organizations that have absolutely no access to Gilad Shalit (and have already received numerous other packages and letters for Gilad that remain undelivered for years).

I find it impossible to believe that the blogger in question fails to comprehend this basic, fundamental point. Neverthless, he pretends that a private individual agreeing to deliver a letter to the UN is somehow comparable to the "Free Gaza" organization making a public demand of Hamas that they provide basic humanitarian prisoner rights to Gilad Shalit. As to why it is that the blogger pretends not to grasp this, I will leave for others to decide.

Useful Idiot-- There's a term I haven't seen before. Except they aren't OUR Useful Idiots. Perhaps they should be termed THE Jewish UI's or better yet, just Jewish UI's.
In any event, they really are idiots.

It's one thing to call a liberal Jewish blogger a useful idiot, and quite another to depict that person with a weapon in hand. That's going too far.

why Shira S - don't they unequivocally support the efforts and statements made by the flotilla?

oh - tiny detail they wouldn't have fired on the soldiers personally, and to be fair they would have distributed bottled water to the mercenaries and the wounded IDF soldiers equally.

SS: I think its clear they are all bashing Israel.

Shira: the comic was a metaphor.

Words are weapons too.

Actually, we meant kill all the Jews.

Doesnt matter if they are left wing right wing live in Israel or Brooklyn.

he has no influence, no reach, and dwindling readers...

Hey Joe. What a complement! DovyWovy is trashing you in the comments section of his blog. Between you, Jameel and Lurker he says you are the worst of the three!
You must have really gotten under his skin and hit the nail head on. Lurker proves that Dovy has no integrity, that Dovy's arguments are pathetic and inconsistent and to top it all off he proves he's a hypocrite (with examples).
But you're still the worst! I guess proving him an Israel basher did it. Even the Meraglim "told the truth". the difference was in their nuance.
I don't think you could receive a better complement than that.
Sorry Lurker and Jameel, you'll have to just do with silver and bronze.

I was told he that thinks some guy name Joe who apparently completely and effectively rips him apart on his blog is me. Maybe he has us confused.

But your name isn't really Joe...

And you certainly have never managed to effectively rip him apart. If this post was meant to prove otherwise, then you're more of a joker than I thought.