You call that Humanitarian Aid!?

If you haven't yet read Jameel's amazing interview with the senior Israeli official of COGAT, the department responsible for transferring humanitarian aid to Gaza, you should do so now (as well as his followup article which will be posted later today).

In the meantime, besides expired medications, here are some more pictures of some of the "humanitarian aid" the flotilla terrorists were trying to deliver.

First we have the piles of humanitarian bullet proof vests (note the Turkish flag). I guess, considering the number of Gaza civilians that Hamas murders every week, it might count as Humanitarian aid. Though I don't see how it would help against Hamas's habit of kneecapping opponents. 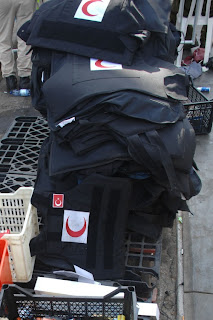 Then we have the rifle scopes and night vision equipment. I'm having more difficulty explaining that one away as humanitarian aid. Can anyone help? 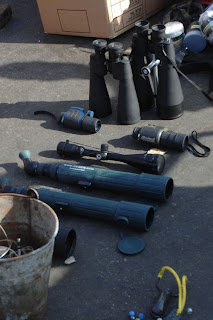 UPDATE: One of the (many) cameras used had an incorrect time stamp on it (only viewable in its internal EXIF file). The terror supporters are using that to claim the photos of the equipment found on the terror flotilla was faked.

Clearly us tricky Jews managed to fake all the equipment standing next to the boat.

I'm sure that won't be proof enough to the anti-Semites. Not that we have to prove anything to them.

But there is a big surprise coming up.

We'll soon be posting some of their own home videos. Wait to you see that material!

I seem to remember Hillary Clinton donating a few thousand dollars to buy bullet proof vests for the poor settlers. Those vests are for the Ambulance workers who are always targets by the killer israelis. and stop your lying, if you could. there were no weapons.

How ironic. Settlers need bulletproof vests to protect them from Hamas and Fatah gunfire.

Civilians in Gaza need bulletproof vests to protect them from Hamas and Fatah gunfire.

Wait, there is no more Fatah in Gaza, Hamas shot them all.

Are those Turkish flags in the vest?
I had thought that they were red cresents (as in the Red Cross' other symbol), although I couldn't figure out why that would be needed on a bullet proof vest, unless it was to protect ambulance drivers tranposrting terrorists, but we know that Hamas would never do that - right?

There's a tiny Turkish flag on one vest, probably a manufacturer's mark. The large crescent is the Red Crescent, I guess meant to imply that the vest are for ambulance drivers who, nebach, seem to be constantly under fire. (From who? And why aren't they orange?)

Where did you get these pictures from? Why aren;t they being distributed to major US Newspapers?

what...comment on what phillip, the jew hating bastard has to say?

weiss, silverstein, finkelstein, chomsky, blumenthal and a bunch of other self hating jews, all have a special place in hell

as is being noted in other posts...the camera itself was not sold until june of 2006...so the pics could not have been taken during 2/06...its just an error in the time stamp

but nice try by the jew hating bastards...who have yet to show video evidence that the idf fired first.

As you can see from the update, I've added a video taken next to the captured ship where all the equipment in the photos and boat can be seen together.

But it's some of the other videos I'll be posting over the next few days (taken from the flotilla terrorists themselves) that will really blow you away.

Not that I know anything, but I imagine it would make more sense to release everything ASAP. This PR fiasco would be smaller had the IDF Spokesperson release their videos immediately rather than sitting on them for a day.

Apparently, expired medications are often donated, since they are good for a not insignificant period of time past their stamped expiration date.

Yoni: Well, that fact seems to have eldued Kaplan in his hatchet job on Israel in Slate.

Nothing puts either the vests or scopes in the context of the boat. The video does not "slide" over to them, it clearly cuts over to them, does some pan and zoom action, then moves back to video. A fairly simple job with any video editing software. Please.

It's so funny when the flotilla peoples own video shows them throwing stun grenades, it shows them beating the soldiers with poles and chains, and then all these flotilla supporters are obsessed to the point of making up crazy conspiracy theories about some pictures of rifle scopes and bullet proof vests, as if the other stuff isn't damning enough?

What a nutjob! The camera pans smoothly from the boat to the pile of weapons taken from the boat, uncut, unspliced - any idiot can see that. And you clearly see the vests on the bottom right, and the scopes on the top next to the cardboard box. Next they'll say they pulled th scopes out of storage from 1998 to add to the video.

Not only are these guys nuts, they're delusional.

this posted linked from BMEWS.

Nice work. Can't wait to see the home movies in a couple days.

When does the MV Rachel Corrie get into the action? I want to see the IDF flatten it like a pancake. That is, of course, assuming it wasn't boarded yet!