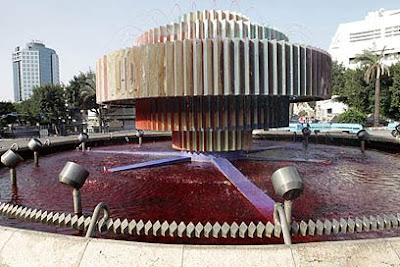 In "retaliation" for Israel stopping the flotilla from Turkey, leftists defaced the iconic Agam fountain and 2 others in Tel Aviv, spray painting slogans such as "Freedom for Gaza" and "Occupation=terror" around the fountain, and dumping red paint into the fountain's water, coloring it red.

Unlike the "price-tag" actions allegedly assumed to be carried out by right wingers (though Israel's police and Shin Bet have not managed to indict a single person for any of the mosque vandalism, despite dozens of arrests and interrogations), the left wingers proudly left statements attesting to their vandalism.

Moshiach is on the way!
Soon it will be impossible to tell the difference btwn erev rav and our enemies.

It's getting that way already!

Frankly, its an improvement. The place looked like crap anyway. maybe they covered up all the obscene tagging and graffiti.