Some of today's tidbits from a collapsing Egypt.

1. Glad we gave the Sinai to Egypt -- the US guarantees for a demilitarized Sinai don't seem to be working.

Foreign Ministry spokesman Yigal Palmor, contacted by the German Press Agency dpa, only said Israel was following and checking the media reports about the development.

But in following the Israeli government line about developments in Egypt, he declined further comment.

Nor did he show much concern about whether the Egyptian military move was possibly in violation of the 1979 Camp David peace agreement regarding the number of forces in the Sinai, commenting that these details could be checked in the internet."(M&C) [and kudos to Lurker for spotting this first via Maan]

2. Tens of thousands continue to riot in Cairo...Foreign Minister flees under heavy fire.

Former Egyptian Interior Minister Habib El-Adly was evacuated from the Interior Ministry Building in Cairo under heavy fire, Al-Jazeera reported Sunday afternoon, despite the authorities' attempt to shut down the Qatari network in the country.

At the same time, tens of thousands of protestors were making their way to the Tahrir Square in central Cairo. Al-Jazeera said the protestors were carrying signs calling on President Hosni Mubarak to resign and throwing stones at his picture. Military forces remained deployed in the area, observing the protestors. (Ynetnews)

3. Remains of Egyptian Government Shuts Down Al-Jazeera. (No Leaks for YOU!)

Egypt said on Sunday it had shut down the operations of Arab satellite broadcaster Al-Jazeera, which according to the authorities had encouraged the uprising in the country, in an attempt to restore order.

"The Information Minister ordered ... suspension of operations of Al-Jazeera, cancelling of its licenses and withdrawing accreditation to all its staff as of today," a statement on the official Mena news agency said. The Qatari network said the move was aimed at "silencing the Egyptian people". (Ynetnews)

No sitting on the fence: Red Division's engineering prepares to block the first of a number of roads on the international border with Egypt. The first roadblock, set up as a pilot, will soon be build via the combined forces of the engineering department (desig), Field Engineering Command, Eilat's IDF Control Center and the IAF-Israeli Air Force.

The model was built by civilian officials, with planning and building lasting only two weeks. The Division is being tasked to seal roads in problematic Eilat IDF Control Center sectors.

The first point to be blocked is considered a "hot" sector, due to multiple infiltrations at that location. For example, this point was infiltrated by a Palestinian terrorist in 2007, who attacked civilians.

The road will be blocked by fences, with varying heights. Designed to be "thorny" and with razor blades on the sides will make it difficult for infiltrators to pass through. The fence will have such small holes in it, that it will be too narrow to insert even a finger. Special sections of the fence will be installed by transport helicopters and constructed by the engineering corps. (IDF Spox) 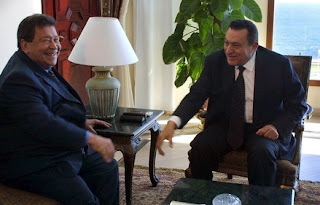 As Egypt hunkers down, Al Jazeera reports that Hosni Mubarak is planning his getaway.

Not to Europe, England or the USA.

"According to sources in the Egyptian Embassy in Tel Aviv, Israel is making preparations to welcome Hosni Mubarak into exile after Saudi Arabia rejected overtures" (Al-Jazeera) 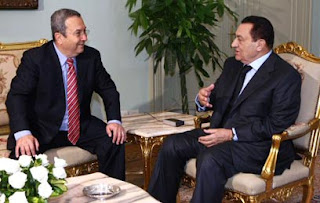 You don't have to believe it (after all, it's from Al-Jazeera), but take a look at the faces of Mubarak's good friends from Israel's Labor and Kadima parties.

Fuad "Binyamin" Ben-Eliezer promised us last week that his good friend Mubarak was in total control of his country (and that Mubarak cares about his people).

Olmert is smiling wider than a cat that swallowed the canary... 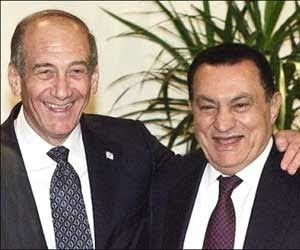 Don't fool yourselves -- this is exactly what we can expect from Abu Mazan in the Palestinian Authority...and unstable regime with a peace treaty not worth the paper it's signed on.

6. Last but not least...Globes is reporting that the Iranians are blaming the entire destabilization demonstrations in Egypt...on Israelis vultures and sharks? Nope...Israeli command units.

"Israeli commando forces came to Cairo in order to create tension and unrest in the city," he distributes today (Sunday)'s official news agency of Iran's Islamic Republic. Information sources to IRNA reported that the appointment of Egyptian Intelligence Chief Gen. Omar Suleiman, whom they call the main negotiating with the Zionist regime, the deputy of President Mubarak, shows in fact that Mubarak gives green light to the Zionist regime to intervene in local events in his country. "

Eyewitness to the Iranian news agency said on the phone that "he saw suspicious attacks on commercial and residential places and killings by people suspected of Cairo which created uncertain conditions in the country." Witness referred rumor that Israeli agents integrated into the crowd to lead the public protest turned violent civil conflicts.

Several witness that when his contract with a number of American and Zionist leaders in the last 24 hours, President Mubarak warned that toppling his administration will pave the way for the "flow of oxygen" to Israeli rule.

Meanwhile, Zionist officials have expressed strong support for Mubarak's dictatorial regime and believe that the possible collapse will lead to further isolation in the Zionist regime" was written.

There are other reports of demonstrations in Jordan and Saudi Arabia, but the press is keeping a tight lid on those. (The Muqata posted about Mubarack's son fleeing to England a full 24 hours before most news outlets picked up on it)

One of the important lessons to be learned, not yet mentioned here, is the treatment, when it's on the ropes, of the Mubarak government by Barak Obama. Obama hasn't hesitated to throw to US's "good friend" (admittedly bought with lots of foreign aid) to the wind in favor of the insurgents.

I can only assume that if the Israeli goverment were to, God-forbid (does Rav Ovadiah allow me to write that?), find itself similarly down-and-out that it would receive the same sort of treatment.

Let's all re-read the haftorah from three weeks ago (V'eira from Ezekiel) about Egypt (the US) being a "weak reed cane for Israel to lean on...