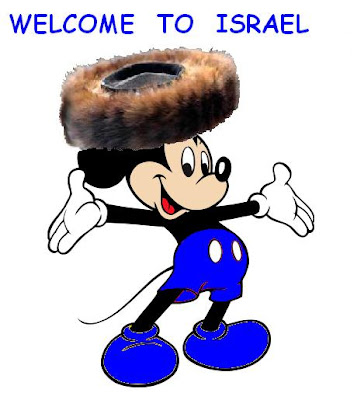 The entertainment complex will be built on an 80-dunam (20-acre) site and will include 50,000 square meters of cinemas and shops and a 30,000-square meter Disney amusement park. The land is owned by a local family.

The new complex will be near the Cinemall, which has stores and a 23-screen Yes Planet multiplex.

Haifa Mayor Yona Yahav said, "This plan expresses confidence in our plans to turn Haifa Bay in a thriving business area. The plan began with the municipality's assistance in the building of Cinemall and the upgrade of the mall, previously known as the Lev Hamifratz Mall, and the building of the transport hub for the cable car, which carries passengers up to the Technion and Haifa University."

I wonder if Israeli Arabs will visit -- in light of the Fatwa against Mickey Mouse.

YNET reported this 2 years ago...

In an interview with Al-Majd Television, sheikh Muhammad Al-Munajid, a former diplomat who once served in the Saudi embassy in Washington, condemned cartoons that endear rodents to their viewers.

Islamic law, he said, sees the mouse as "a repulsive, corrupting creature" while children today see mice as loveable and "awesome" because of animated shows like Tom and Jerry, and Disney staple Mickey Mouse.

"Mickey Mouse has become an awesome character, even though according to Islamic law, Mickey Mouse should be killed in all cases," Al-Munajid tells the interviewer.

"The shari'a refers to the mouse as 'little corrupter,' and says it is permissible to kill it in all cases. It says that mice set fire to the house, and are steered by Satan. The mouse is one of Satan's soldiers," he goes on to say.

If the Arabs don't like Mickey Mouse, what's their loss is Israel's gain.

And the Arabs would be petrified at mice and rat fancy - yes, the domesticated descendants of wild rodents make tame pets!

The streimel on Mickey Mouse is inspired!

I would bet my house this project will fail. Unfortunately, when this fails, my house value will be next to nothing! DO any other Haifa Bay residents want to start an Arnona strike?

Thank you for making this available and offering it to all the World!

I also embedded this on my personal web site, OUR ETERNAL STRUGGLE, so more folks can enjoy it and share it.

How typical of terrorists. A mouse is against Islam when Jews could possibly profit by it. But let those evil sickos make a mouse into an instrument of deception, whereby which their children will rush to die for the glory of cowardly old men (or am I the only one who remember the jihadi mouse videos that Disney SUED them over?), & suddenly a mouse is a terrific thing!

I have absolutely no idea how this project could succeed. As mentioned, there's already a 23-screen theater a block or two from this location. And it was in financial trouble just a few years ago. And the market for theaters is surely decreasing due to DVDs and internet video.

or am I the only one who remember the jihadi mouse videos that Disney SUED them over?

Actually that's what came to mind when I read Jameel's mention - I thought maybe there was some backlash against those shows and so they made a fatwa....

I would bet my house this project will fail. Unfortunately, when this fails, my house value will be next to nothing!