An incredible display of racism in Jaffa

Racist is the first word that comes to mind when viewing photos and videos of the Arab/Leftist protest in Jaffa against Jewish people.

The protesters have tried to hide behind the mask of post-Zionism by calling "Jews" "settlers".

Meanwhile the protesters yell "Allah Hu Achbar" and "Jaffa Jaffa Arabiya" (Jaffa is Arab) proving that in reality it is nothing more than a protest against Jewish people living in Israel and Jaffa specifically.

It is also clear that certain people are trying to stir up the local Arab populations and spread the chaos of the Arab world into our country. But since we have democracy here, the only direction they can be trying to take it to is Islamification.

But at this point, we've come to expect nothing less from Israel's fifth column - our radical and very sick left.

Photos of the protesters from Walla.
Note that this Nationalist (and racist) protest against Israel is taking place just south of Tel Aviv. 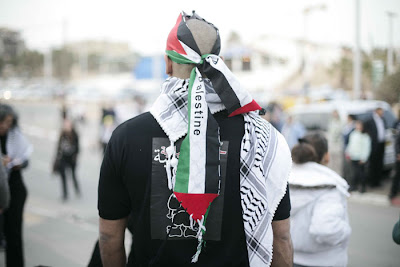 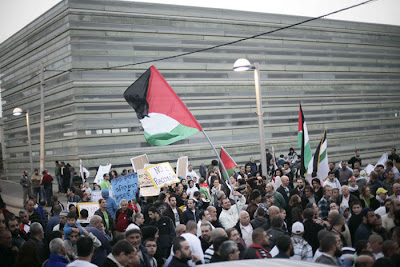 Yafo should be immeidately transfered over to the Palestinian Authority to be part of the Palstinian state and safe passage roads direct from Gaza and Nablus to Yafo should be built.

The Palestinian Authority can't find it's own backside. Yeah, let 'em have Yafo.

Well then, if Yaffo is part of Tel-Aviv, give Hamas or the PLO the whole city. Now THAT will get the liberal leftists in that country to wisen up quickly. Well, maybe it will.