Gordon Gecko once said "Greed, for lack of a better word, is good."

With the massive oil findings this past year, Israel is debating that concept... sort of.

Greed is bad, if the investor, the one who took the risk, is the one who gets super-rich - according to some in our country. But it's not greedy to change the rules and thus take much higher tax revenues then what was originally promised to those oil search firms.

But this post isn't about that debate, as important as it is. 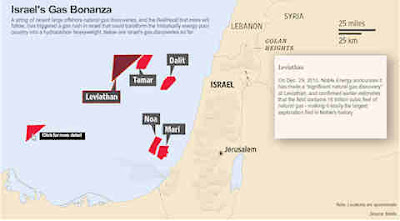 Lebanon has been making moves lately to try to grab Israel's oil fields away and claim them for themselves.

Lebanon has run all the way to the UN to get that ball rolling. While originally, and officially the UN originally said they weren't getting involved. Now it seems that they might be.

Lebanon is claiming that Israel's gas is located off their coast and belongs to them.

So I decided to clarify a few concepts for the readers before the discussion really gets out of hand.

There are various types of maritime borders.

For our purpose, we will be discussing the area called the "Exclusive Economic Zone" or the EEZ.

The exclusive economic zone is an area beyond and adjacent to the territorial sea, subject to the specific legal regime established in this Part, under which the rights and jurisdiction of the coastal State and the rights and freedoms of other States are governed by the relevant provisions of this Convention.

What the EEZ does is define the maritime borders and economic exploitation rights of each country within their EEZ. There are a few countries with clear disputes based on overlapping claims (or in some cases, overreaching claims). Israel should not be one of them.

While not a signatory, Israel's neighbors, Cyprus, Lebanon and Egypt are. The EEZ borders of each country are relatively clear, and (until now) undisputed because it's not such a technically difficult region to demarcate (thought the demarcation process is a very technical one). and even though Lebanon never formally demarcated/declared their EEZ.

Furthermore, until now, Israel has been claiming this specific region also by right of the Continental Shelf, which doesn't even require the UNCLOS treaty for demarcation.

To further bolster Israel's claim, Israel and (Greek) Cyprus recently reconfirmed their EEZ border demarcations after Israel's gas find, confirming that Cyprus has no claim to that region. Turkey was very upset by this, even though North Cyprus's EEZ is only connected to Lebanon, not Israel.

In the map below you can see where Israel's EEZ is, and the location of the dig sites within the EEZ. 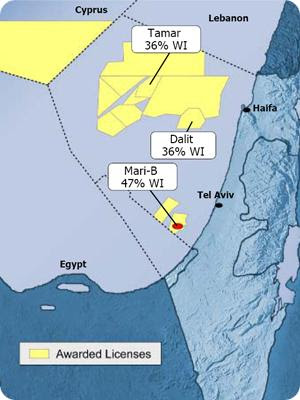 The cream colored areas are the exploration rights zones, not the size of the gas fields. (I apologize for the 1967 armistice line markings on the map).

Here is Cyprus's EEZ (along with Lebanon): 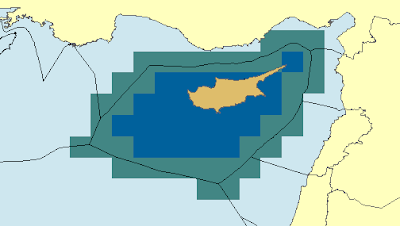 Questions might arise if the underground gas reserves actually straddle the border of a neighboring EEZ, but they don't.

But that hasn't stopped Lebanon has claimed it is possible the basin extends to Lebanese waters. Delek Drilling, one of the partners in the U.S.-Israeli consortium, denied this: "An examination made with the Petroleum Commissioner showed that these claims are not correct and the location of the license where Tamar 1 is being drilled was studied carefully and it was found that the entire area of the license was within territorial waters of the state of Israel." Delek Group chairman Gabi Last added, "The border of Israel's exclusive economic zone waters passes to the north of the Tamar oil drilling, and significantly so."

But the truth won't stop Lebanon from creating a false narrative.

Unfortunately, since this is the UN we are talking about, we can now expect yet another international attack on Israel's basic rights.


Lebanon is greedy. Lebanon knows it can probably count on the UN to attack Israel in the arena, and perhaps even win.

But as I said at the beginning "Greed is good".

and how do the political upheavals in lebanon affect all this?

Well, maybe if Lebanon deigned to talk to Israel as a neighbor, Israel would be able to negotiate these issues directly with them.

Thank G-d you moved on from that idiotic discussion in the previous post.

An article of high quality - many thanks