Update: 10:22 PM 3 demonstrators arrested in Tel-Aviv's protest tonight; 1 for possessing a dagger, 1 for attacking a policeman, and 1 for waving a Palestinian flag.

In probably the biggest Leftist demonstration in recent history (that didn't require a free concert), thousands have swarmed into Tel-Aviv to protest "anti-democratic trends in the Knesset".

The "anti-democratic trends in the Knesset" they are referring to is a newly passed bill requiring a Knesset committee to investigate the sources of funding for 16 leftist organizations in Israel that have been at the forefront of de-legitimizing the IDF and Israel.

The rather poorly kept secret is that Foreign Governments are behind much of the funding for these organizations that contribute to anti-IDF and anti-Israel activity.

And while it's been known for a while that European governments are funding some of these groups, Im Tirtzu recently exposed that Arab countries are also funneling money to some of these Israeli NGOs.

Could the bulk of the these organizations even continue to operate and exist if they had to rely on Israeli/Jewish funding only? 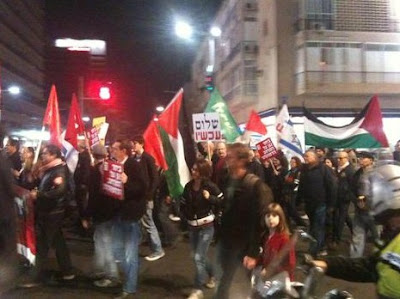 "Hadash Chairman Mohammad Barakeh said, "We are at a dangerous crossroads where democracy is concerned. Democracy is collapsing, not because of Lieberman but because of the support he is receiving from the prime minister. Jews and Arabs who care about democracy cannot fail at this time." (YNET)

In a brilliant tactical move this evening, PM Netanyahu announced that the Knesset would also investigate the funding sources of right-wing organizations.

Personally I think that's a wonderful idea, as I'd be thrilled to know if any foreign governments are helping to fund:

- the restoration of Jewish Hebron
- organizations like El-Ad and Ateret Cohanim that are helping Jews buy homes in Jerusalem,
- organizations in favor of promoting "freedom of religion and equality of prayer for Jews on the Temple Mount"

Somehow, I don't think foreign governments are behind them... and the above organizations are a thousand times more "grassroots" than any of those demonstrators in Tel-Aviv this evening.

In the US, there is a law called FARA.

The Foreign Agents Registration Act (FARA) was enacted in 1938. FARA is a disclosure statute that requires persons acting as agents of foreign principals in a political or quasi-political capacity to make periodic public disclosure of their relationship with the foreign principal, as well as activities, receipts and disbursements in support of those activities. Disclosure of the required information facilitates evaluation by the government and the American people of the statements and activities of such persons in light of their function as foreign agents. The FARA Registration Unit of the Counterespionage Section (CES) in the National Security Division (NSD) is responsible for the administration and enforcement of the Act.

Yet, no one is calling the US anti-democratic.

I would add, this new Israeli law does not impede the actions or activities of these NGOs. It merely exposes them as the foreign agents they are.

It's no surprise that the "New" Israel Fund is leading tonight's demonstration.

Is it against the law to waive a Palestinian flag in Israel?

Why would they when every single country in the world considers settlements illegal?

The leftists, I mean the progressives as usual want scrutiny on everyone else but themselves. Sunlight is the best disinfectant.