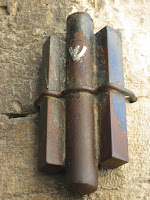 The Israeli Northern Branch of the Islamic Movement, led by Sheikh Raed Salah, is now demanding the removal of all "Mezuzot"** on the gates of Jerusalem's Old City.

According to the movement, the mezuzot are an attempt to Judaize the "Arab heritage" of the Old City.

In a statement issued by the movement, it stated that during a patrol in the Old City, they saw mezuzot on the various gates, and Jews touching the mezuzot as they passed through the gates.

"This is a disgusting attempt to Judaize the Arab and Islamic heritage of
the Old City," the statement said, "and all the relevant Islamic institutions
are called up to to act quickly to remove the mezuzot."

Mahmoud Abu Atta, spokesman for the institution "Mossad Al-Aqsa" said that
he sees these mezuzahs "as continued attempts to Judaize the Old City. A Mezuzah
is put on the door of a Jewish home yet this [the Old City of Jerusalem] is an
Arab city."

On a personal note, I remember the first time I passed through Sha'ar Yaffo -- the Jaffa Gate, and saw the large mezuza on the gate. Nothing is more appropriate than a Mezuzah on the gates of the Old City of Jerusalem.

It should be noted that the Adalah organization, a key New Israel Fund grantee in the Israeli-Arab sector, expresses support for Sheik Raed Salah. (JewishWeek)

What could be more appropriate for a "New Israel," than the Old City of Jerusalem, without any mezuzot?


**A mezuzah (Hebrew: מְזוּזָה‎ "doorpost") (plural: mezuzot (מְזוּזוֹת)) is a piece of parchment (often contained in a decorative case) inscribed with specified Hebrew verses from the Torah (Deuteronomy 6:4-9 and 11:13-21). These verses comprise the Jewish prayer "Shema Yisrael", beginning with the phrase: "Hear, O Israel, the LORD our God, the LORD is One" (wikipedia)

I find the Al Aksa Mosque and the Dome of the Rock an attempt to Arabize the Jewish heritage of the Old City.

As soon as they pull those down, we'll talk about the mezuzahs.

This is my 3rd year living in the Old City and it might just be a rumor but I have heard that arabs put nasty stuff on those mezuzot knowng quite well that Jews have a custom to kiss them.

Kiss at your own risk!

Leah's request is perfect, I second the 'motion'!

I'd also cite the noise pollution of the muezzin and the angry-sounding (what else?!) speeches broadcast over the overloud loudspeakers and say it all needs to go.

Toss the Waqf and force them to quit destroying the very real presence of the Bais Hamikdash where they are digging, in a bald attempt to destroy any such presence.

May these Arabs get *zapped* if they attempt to remove the mezuzot anywhere in the Holy Land!

please tell me this is a fringe organization

I suppose there are none on the gates in the Muslim sections. Meir Kahane tried to put one on Sha'ar Shechem when he first came to Israel and was arrested.

I make a point of touching each one on Sha'ar Yaffo and Sha'ar Tziyon when I walk through. I never kiss my fingers, though, no worries.

And how many years have these mezuzot been there before these Arab tourists came by and saw them on their first tour of their, ahem, native country?

Not to impune your journalistic credibility, Carl, but your connection between Adalah and Saled is incorrect for two reasons:

The article you've used as a reference is by discredited pundit David Bedein, whose tendentious reportage was thoroughly debunked. Responsible bloggers would do better than recycle these errors.

Lastly, characterizing Adalah's legal representation of any client as "support" would be to blame every criminal defense lawyer with "supporting" the acts of their clients. Such a claim is absurd, because one could hardly say that IDF lawyers assigned to the criminal defense of suspected terrorists in military tribunals "support" their clients. That even convicted terrorists receive fair defense before the law is a hallmark of Israel's vibrant democracy.

This post seems to confuse the issues. We'd appreciate a correction.

Just skimmed through your debunking. Didn't see much debunking. Lots of ad hominum attacks against Sokol and Bedein though.

I am a supporter of the NIF, and also a reader of this blog, despite that I disagree with 95% of it.

Does the New Israel Fund condemn Sheik Raed Salah's call to remove the Mezuzas from the entrances of the Old City of Jerusalem?

Not to impune your journalistic credibility, Ben Murane, but your connection between Carl and The Muqata is incorrect for two reasons:

1. Carl doesn't write for the Muqata blog.
2. Every posting on this blog has a byline, and this article was written by Jameel (as it clearly states).

The article you've used as a reference to discredit David Bedein, is extremely biased and subjective, and does little to address the actual content of Bedein's research.

I will be fisking it point by point tomorrow for the benefit of the Muqata readers.

However, to clear the air, I would appreciate if NIF would officially condemn Sheikh Raed Salah's attempts to remove Jewish mezuzuot from the Gates of the Old City of Jerusalem. That would make it much easier to objectively address your concerns.