Goldstone condemns World Jewry
Amalekite Brotherhood deny they were involved in plot, say it was all Thai workers.

Judge Goldstone condemned yesterday the wholesale slaughter of Haman, his 10 sons, 500 Shushan activists and 75,000 innocent civilians in the Persian Empire.

“The self-defense plea is laughable in light of the influence of the Jewish lobby within the Achashveirosh government, and the Jewish controlled PonyMedia.

The slaughtered civilians were merely expressing their right to free speech and assembly, and just rage against the growing Jewish influence in world politics."

Goldstone quoted Vayizata as further proof of the non-violent intentions of the slaughtered civilians,

“The Jewish Lobby has people of influence at the highest levels, and we even suspect they have agents close to the king. Of course we planned to non-violently protest and slaughter all the Jews, it’s the only way for peace and justice to prevail.”

Up to the last minute Haman and Sons denied being involved in trying to kill the Jews.

The Amalekite Brotherhood said it was all Thai workers.

The Amalekite Authority deny that the plot was part of a reconciliation plan to reunite the Amalekite Brotherhood and Authority back together again, but rather it was the Thai workers.


haMAAN investigative journalists have uncovered that Jews have been deploying sharks and vultures to spy against members of the Royal Court, such as Haman, and it was Thai workers.

The Thai Embassy denies any connection to the plot pointing out that there are no Thai citizens anywhere in the Persian Empire.. 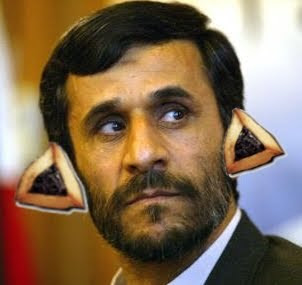 The New Iran Fund supplied Judge Goldstone with incontrovertible evidence of Jewish war crimes. This evidence and witness testimony came from anonymous soldiers in the Iranian Jewish Defense League who claimed to know soldiers who knew soldiers who thought about taking booty.

There has been mixed feeling in the Jewish community about the public reading of the Megillah.

"Publicizing the Megillah brings us down to their level, and reading it is not something a Jew should do. Furthermore it proves that the Jewish community must do Cheshbon Nefesh for its actions against the occupied Amalekite people. We stand together with the Amalek nation in their time of need."

Newly discovered Dead Sea blogs describe how this was really a coup attempt by Mordechai the Jew to take over the government and start his own dynasty. Hence the original name for the holiday, "Mordechai Day".

Charbona, a member of the royal court adds, “Haman was planning this for a while. With Achashveirosh zigging and zagging all the time it was tough to know who He supported and who His friends were, but now that it's over, it is finally the right time to talk about it.”

We proved to you the NIF does not take money from Amalek when we told you we didn't last week. Im Tirtzach are the real vilains here. We know they got 30 pieces of silver from Mordechai.

Kill them all, let Adar sort them out.

My argument is illogical and based on mistaken premises, but I'll argue it anyway. You can't say that Amalek is evil.

PP: I didn't even mention the girl in the post. What are you talking about?

We condemn the use of Hamentashen to make fun of an innocent victim of the Judean Occupation Army brutal attack on the occupied Amalek nation.

We may have proven ineffective this time, but there is always the next.Our hate has no bounds.

Jameel, you need to stop Joe from writing. He is bringing down the level of your blog and you're losing readers because of it.

But the blog is at an all time high!

I don't know why you're all attacking Joe. He's just repeating the news as it was reported by haMAAN.

I posted it first.

Goldstone was of course right, and he will be speaking at our upcoming convention, where not a single Judean flag will be shown.

I may need volunteers to go with me in the middle of the night tonight to deal with Jewish violence. Currently it is a cat and mouse game in around Shushan. Security forces are running from place to place to take care of the Jews. The plot was of course reprehensible. Call me if you are willing to help out

We do not know yet who was really behind the Purim plot.

The decision to attack Amalek was a misguided policy. That doesn't mean we need to count me as a deligitimizer of Jewish right to exist.

Jews living in Shushan is like a building a nuclear reactor. It seemed like a good idea at the time, but look what it turned us into.

Is this supposed to be funny?

I will get my nuclear bombs and avenge my people.

Your Megilla is a book filled with violence, nationalism and racism. It disgusts me to read that Jews killed their enemies, or that people were afraid of the Jews and converted because of this unJewishlike Jewish violence.

I believe in peace for everyone and as a Jew this racist nationalist Megilla does not represent me.

You forgot to gratuitously throw in the word "Fascist".

You Jews should get the hell out of Shushan.

But it was the Thais.

See,even back then the Jews were responsible for all the wars. I'm going to make a movie about it, "The Passion of Haman"

Heh.
In the 1970's Ephraim Kishon wrote two pieces that foreshadow this.
In "The Mark of Cain" he described the UN rehabilitating Cain and placing the blame for Hevel's murder squarely on Hevel. Of course, the Arab League was able to come up with many reasons why Hevel was to blame...
In "Sympathy for Goliath" he tells the story of the aftermath of Goliath's death from the point of view of the Philistines, including an interview with his grieving widow and orphaned children. Naturally David is a war criminal for using unsanctioned weapons and committing an unwarranted act of agression.

You people cannot fool us. We know that the unjustified massacre of Haman was just the beginning.
Ever since that day, you have persecuted his descendants unmercifully.
Jewish doctors launched a pogrom against Stalin and poisoned him on Purim.
The evil Jew, George Bush Sr. humiliated the noble Saddam on Purim in Basra.
The evil Jew son, George Bush Jr. - George From George (the English translation of Gog Magog) declared war on the noble Maddas, er, Saddam, on Purim.
Then you killed him and his noble sons.
And so it continues... All of Haman's descendants will currently be SLAUGHTERING EACH OTHER this Purim due to your nefarious plottings.
When will this madness stop?
Why can't you live and let live?
Luv and let luv?
"Oh I understand your objections. I grant you the problem's not small. But, if you could see them through my eyes....
They vouldn't
Look Haman
At All!"

Helen Thomas you're the only one who made me laugh! What's wrong with Playboy, departing from their usual by featuring a dam-sel with her ----- on!

Hey you forgot to report my denial of the Destruction of the Bet HaMikdash!

We twittered about the first news item last week, but our sources are telling us it's not accurate.

Something indeed is rotten in Modiin :)

I'd like to see a good fisking of this nonsense.

Wow, I see many people who had no good seuda invites over Purim and I guess not many mishloach manot to deliver.