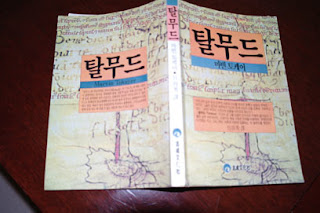 The following fascinating article was translated by The Muqata from YNET.

Update: After receiving a personal thank you letter from the South Korean Embassy in Israel for this blog post, I have made a few minor updates to the article below at the Embassy's request, to better reflect Talmud (탈무드) Study in Korea YNET has reposted an updated version as well.

Close to 50 million people live in South Korea, and almost everyone is taught the Talmud at home by their parents. "We tried to understand why the Jews are geniuses, and we came to the conclusion that we think it is because they study Talmud," said the Korean ambassador to Israel, Mr. Young Sam Ma. And this is how "Rav Papa" became a more well known scholar in Korea than in Israel.

Almost every home in South Korea now contains a Korean-translated Talmud. But unlike in Israel, the Korean mothers teach the Talmud to their children. In a country of close to 49 million people who believe in Buddhism and Christianity, there are more people who read the Talmud - or at least own their own copy at home - more than in the Jewish state. Much more.

"So we too will become geniuses"

"We were very curious about the high academic achievements of the Jewish people”, explains Korean Ambassador to Israel, Mr. Young Sam Ma, who was hosted on the channel 1 TV programme “Culture Today”."

"Jews have a high percentage of Nobel laureates in all fields: literature, science and economics. This is a remarkable achievement. We tried to understand what is the secret of the Jewish people? How they - more than other people - are able to reach those impressive accomplishments? Why are Jews so intelligent? In our opinion, one of your secrets is that you study the Talmud”.

"Jews study the Talmud at a young age, and it helps them, in our opinion, to develop mental capabilities. This understanding led us to teach our children as well. We believe that if we teach our children Talmud, they will also become geniuses. This is what stands behind the rationale of introducing Talmud Study to our school curriculum." Jameel adds: Again, The Muqata was requested to remove the school curriculum comment, and replace it with, "This is the rational to make Talmud a part of home education in Korea”

Ambassador Ma says the he himself studied the Talmud at a very young age: "It is considered very significant study," he emphasized. The result is that more Koreans have Talmud sets in their homes than Jews in Israel.

“I, for example, have two editions of Talmud: one my wife bought and the other I got from my mother in law”. [Jameel adds: Almost like the Jewish tradition of the parents of the bride buying a set of Talmud for their future son-in-law...]

Koreans don't only like the Talmud because they see it as promoting genius, but because they found values that are ​​close to their hearts.

"In the Jewish tradition, family values ​​are important," explains the South Korean Ambassador.

"You see it even today, your practice of the Friday evening family meal. In my country we also focus on family values. The respect for adults, respect and appreciation for the elderly parallels the high esteem in my country for the elderly."

Another very significant issue is the respect for education. In the Jewish tradition parents have a duty to teach their children, and they devote to it lots of attention. For Korean parents, their children's education is a top priority. (YNET)


The photo above of a Talmud translated into Korean,
is courtesy of the South Korean Embassy to Israel.

But anyway, here's where the genius comes from. It's not the talmud. A paper in 2005 by three US geneticists, Gregory Cochran, Henry Harpending and Jason Hardy entitled "Natural History of Ashkenazi Intelligence" posited that some of the genes which when in homozygous form cause diseases (like Tay-Sachs and torsion dystonia) in so many Ashkenazi Jews, when in heterozygote form they contribute to higher intelligence.

Btw, I'm not a carrier for all the traditional ashkenazi diseases, and I have a tested IQ of 165.

I did however, learn talmud before I was tested.

I'm pretty sure I know some carriers who are right out dumb also.
:)

entrepreneur idea alert:
teach open minded, mediocre plus yeshiva students korean (I assume that is the name of the language they speak there) and offer their services a la zionist kollels.

It's too late for Purim and too early for April 1. Strange.

um, that akiva was his father, me.

I just did a Google search on "Korean Talmud" and found multiple references to this from over the years.

It appears to be a true story.

Checking in at an IQ of 136. Don't help me much though, still have trouble getting my mind around a blasted blatt! Shulchan Aruch on the other hand...

"entrepreneur idea alert:
teach open minded, mediocre plus yeshiva students korean (I assume that is the name of the language they speak there) and offer their services a la zionist kollels."

And on their numerous trips back and forth, they can make even more money by trafficking heroin.

"The whole history of American Jewry is a tribute to the power of Jewish nepotism. Indeed, nepotism has been a positive and wholesome force in Jewish life for thousands of years. It is high time to acknowledge and even celebrate this fact instead of trying to keep it hidden like a shameful family secret."

The Jewish Path to Success
http://www.forward.com/articles/7806/

the writing on the cover of this "talmud" seems to be in Latin.
Geoffrey

I read a blog by some American Catholic teachers of English who could not comprehend their students'assertion that they all studied Talmud. What seemed to emerge when these individuals pursued the matter was that there are a number of agadatas that are widely taught as wisdom literature.

As for teaching the thinking and morality (work ethic in particular) that appear together and genius, I'm wondering if, in Britain and the USA of the 1800's and early 1900's - the days of "yankee ingenuity" and the age of invention - the Protestant and Baptist catechisms worked similarly? Post-moderm thinking and ethics seems to have reduced the per capita number of genius level producers. We do seem to have a much greater per capita of genius level "victims" and socialist bums.

In pre-WWII Korea, the dominant religious/philosophical tradition was Confucianism. Although Buddhism flourished in ancient Korea, its influence waned long ago. Following WWII and the Korean Conflict, Christian missionaries in South Korea have been extremely successful in spreading Christian doctrine.

Confucianism teaches respect for elders and belief in a traditional patriarchal social structure. Perhaps this might explain, in part, Korean receptiveness to Talmud study?

i also read an article a while ago, but i don't remember where, that posited that the reason other peoples are not as intelligent as jews is because in the past, the smartest children in a family were often either sent to the army, where they were killed before they had children, or became part of the church, whence they didnt have children either. so the dumber kids were the ones left to propogate, and thats where the nations of today come from

the Talmud will only lead them to 'assissted living', which is somewhat unknown to the gentilesc!

Check out the REAL story behind the Korean Talmud - my brother is currently in Korea and did a little investigating: http://raisingwings.wordpress.com/2011/03/30/tal-mu-duh-the-real-story/

I knew there had to be Jews in S. Korea.

I am sorry to read the bigoted statements scattered in this comment zone. The lack of knowledge of genetics even today makes one reckognize how easily Hitler had it with his myth of a superior race and his extermination program. Do you really think that the oldest kids are really the ones who happen to be the smartest at the genetic level? Check out Robert Zyonce's Cleveland Award Winning research in AAAS in 1975 on Birth Order and Intelligence.

In repsonse to Anonymous:
Supportive, generous, methodical, compassionate,environmentally-aware, humane, warm, welcoming, devoted, assiduous, flexible, open-minded, sympathetic--these do not equal smart, either. But these traits, too, yield success in this world... AND in olam habah...and, though your adjectives sadly describe SOME people of Judaic heritage, THESE belong to MOST Jews I know.

Pretty nice post. I just stumbled upon your blog and wanted to say that I have really enjoyed browsing your blog posts. In any case Iâ€™ll be subscribing to your feed and I hope you write again soon!

I hate to have to tell you this, but it's not Talmud study that's the secret. It's circumcision.

I think we are gathered here for discussing something new to this field...!

Hoffman, Michael. Judaism Discovered: A Study of the Anti-Biblical Religion of Racism, Self-Worship, Superstition and Deceit. Independent History and Research, 2008)

Nice post.Very inspiring.We have learned to earn, grow, and live a fulfilled and happy life in the Spirit.I think interpreting our lives would mean on how we live our christian life more than any translation company could ever offer.The importance of a korean translation being accurate and efficient can indeed not be overstated. Especially in the ever faster moving world of globalized business, successful information and technology transfer within multinational businesses can make the difference between win or lose