"Annually on 8 March, thousands of events are held throughout the world to inspire women and celebrate achievements. A global web of rich and diverse local activity connects women from all around the world ranging from political rallies, business conferences, government activities and networking events through to local women's craft markets, theatric performances, fashion parades and more." (IWD) 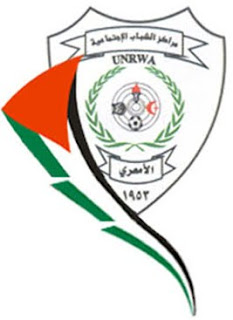 What better way for the United Nations Relief and Works Agency to commemorate International Women's Day, than by having the Al-Amari youth center (a UNRWA youth facility in the West Bank) announce a football tournament for youths to be held later this week, named after the first Palestinian female suicide bomber Wafa Idris.

The Al-Amari youth center's website displays its logo with UNRWA's name in the center. On the home page, just below the logo and bordered in red, is the announcement of the Wafa Idris tournament. (See here in Arabic, here in English)

The PA has repeatedly presented Wafa Idris as a hero and role model, naming places and events after her, including a summer camp for youth funded by UNICEF, a Fatah women's military unit, a university students group for Fatah members, a Fatah course, and more. There have been public demonstrations and songs on PA TV to honor her. (PMW)

The slogan for UNRWA is "Peace Starts Here"

I guess it's no surprise that UNRWA's existance has done nothing to further "peace" anywhere on the planet.

As the UN and free-world harp incessantly about the importance of the creation of a "Palestinian State", we should remember the important Palestinian contribution to the advancement of Women's Rights.

What would we do without feminism?

Just for Hasbara reference: A Jewish-British student called me to tell me that a UNRWA rep was coming to speak on campus and she wanted to create an appropriate response. I explained to her that "the purpose of the UNHCR exists to help refugees while UNRWA exists to destroy Israel." She told me that she went to the speech and actually used the above line and got surprising agreement from many in the crowd. If this line works, keep using it!

I'm pretty sure unwra has said the group used the logo without permission and have asked it to be removed.