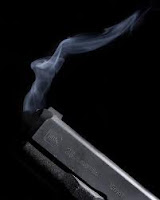 We discussed previously that on January 28th a group of Arab terrorists assaulted a (Jewish) pedestrian. The pedestrian tried to get away, but the Palestinian terrorists were determined to kill him.

The pedestrian shot one of the Palestinian terrorists in self-defense and escaped, as can be seen clearly in the following video.

The only thing the police know is that the pedestrian used a Glock pistol to defend himself.

We've discussed a few other incidents like this where Jewish citizens have been under life-threatening attacks and have been forced to defend themselves.

Since that date the police have trampled the law in a stampede attempt to find and arrest the pedestrian who clearly acted in self-defense.

To do that, the police have compiled a list of licensed Glock semi-automatic pistol owners in the Shomron, and have systematically been arresting them one at a time, despite being legally licensed gun owners. To date they all the gun owners have been released after their false arrested in this fishing expedition.

This morning the an entire troop of police entered the town of Itamar to arrest Moshe Ronsky.

Moshe Ronsky is an IDF reserve officer in a special forces unit.

Moshe Ronsky is also the son of the former IDF Chief Rabbi General Avi Ronsky (who also served in a special forces before becoming a Rabbi).

Moshe Ronsky is also unfortunately a legal owner of a licensed Glock handgun (probably the most popular handgun in Israel).

When the police gang arrived at his door to arrest him, Moshe immediately notified his father who quickly arrived to intervene.

The conclusion of the event and the negotiations was that unlike other licensed Glock owners, Moshe Ronsky would not be arrested from his house, but rather, he would come down to the police station later in the day today to present his licensed weapon for ballistic analysis.

This raises a number of questions.

1) Why do the police need to arrest innocent people in the middle of the night, when they can politely ask these law abiding citizens to present their licensed weapon for ballistic testing?

2) Why does it repeatedly require the intervention of a powerful/influential figures to force the police to comply with the law and respect the civil rights of Israeli citizens?

3) What is the average citizen, without such protectzia, supposed to do to protect himself from this basic abuse of his civil rights by a police force that has no interest in following the law?

4) Why are the police investing all this manpower to find someone who clearly acted in self-defense as can unquestionably be seen on the video?

Have all the other serious crimes in the country been solved? If the police were already out in Itamar, you need to ask if the murderers of the Fogel family of Itamar have finally been captured, because why else would they be spending resources there?

Police behavior in this country is very disturbing. The problem starts at the top and trickles down like a waterfall.

(Oh, and by the way, dear police, Jameel owns a Glock).

The Israel Police is corrupt.

If they don't believe a clear video that shows a Jew exercised his legitimate right of self-defense, you can imagine what their standard reaction is in other cases where its a Jew vs an Arab in the absence of such incontrovertible proof of innocence.

That's why Israeli Jews have learned not to bother to notify the police. At best, the crime will not be solved and at worst they will arrested on the word of an Arab alone even if they were in the clear.

There is no law and there is no justice in Israel.

It's a serious problem. What can we do about it? This post is a reminder that our democracy isn't anywhere near perfect yet. You'd think with social networks we'd be able to correct these imbalances. Any ideas how?

Meir: The way to resolve this particular issue would be if there were an NRA type lobby in Israel.

A powerful lobby that would pressure MKs not based on being "settlers" or "religious" could possibly influence the disgusting behaviour of the Israeli police.

This isn't a "settler" issue, but a gun-owner issue (which happens to be completely ridiculous)

Moshe Ronsky got lucky this morning.

Shraya Demsky, also an officer in the reserves, and the secretary of Alon Moreh didn't have an influential father to call, and he was arrested this morning - because he owns a Glock.

This morning Rabbi Ronsky said to the police that he too has a Glock, the police said they'll be getting to him too.

If that's not the behavior of a gang of thugs, I don't know what is.

Jameel, this isn't a gun-owner issue.

This is a rule of law issue.

It's an issue that the police act above-the-law, like a gang of criminals, and no one in the government does anything about it.

The simple solution - to have disposable guns ? - i.e. biodgradeble after being used - then let the pigs come and search your place for a gun that doesn't exist anymore.
Dunno if its possible - or not ...

Maybe there is an MK (maybe M Ben Ari) who can do something about this and stop the police immediately?

Without disagreeing with your description of the chain of events, I did not see that the video supported it. It looks staged, to be honest--kind of like how a bunch of 10 year olds would put on an attack scene.

Must be the troopers feel 'hot' in their new dark uniforms being issued right now that follows up the eclectic new colour pattern on their cars.

Joesettler's right. This isn't a gun issue at all. It's much more a rule of law one. This gun issue is part of a broader problem that includes selective building violation enforcement and the like.

This behavior gives people a huge incentive to acquire UNLICENSED weapons. In the Shomron it is necessary that many people have weapons, and it is also necessary that you don't get arrested every so often for no reason whatsoever. There is only one way for a person to solve both those problems. It's a way the police should not want to encourage.