Only an idiot will steal an iPad

Only an idiot steals an iPad. No, not because it’s an iPad (though some will argue that, because it won't support flash natively), but because it has a built in GPS tracking system.

On (or around) March 14th, while visiting a Petach Tikva cemetery, Yaki’s car window was smashed and his iPad 64G stolen.

Yaki thought fast. His credit cards and checks could be canceled, but lose his beloved iPad?! Never.

He quickly called home, and asked his daughter Rose to launch the service: Find my iPad.

And Rose began to direct him to where his iPad was traveling. During the ride, but to no avail, Yaki repeatedly called the Israeli police to get their assistance, but they only told him to go to a station to file a report.

Yaki reached the building where the thieves and his iPad were holed up. After negotiating with the police, who couldn’t understand how he knew where his iPad was, they finally agreed to show up and go to the building, but only into the stairwell.

Yaki had Rose, using the iPad’s remote control feature, start to have it make a loud beeping noise. Yaki and the police pinned the iPad’s location down to one of two apartments. The police agreed to knock on the doors, but the residents refused to let them in.

Then Rose screamed to Yaki over the phone, “They threw the iPad out the window”. 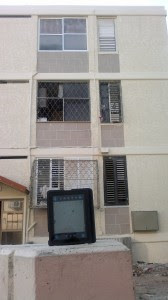 So down they went and retrieved it from some bushes in which it was thrown (no scratches).

The police were fascinated by the device. The possibility of catching the thieves in the apartment did not interest them in the slightest. They told Yaki to go to the station to file a report.

Yaki retorted that they won’t bother to arrest the thieves when they are right there and know where they are. Why should he waste his time going to the station?

So Yaki didn’t waste his time with the police, and got his iPad back without their help.

And even better, Yossi of Elad found the bag with his checks and credit cards in it that the thieves had thrown aside.

Lesson: Only an idiot will steal an iPad.

(If only it supported Flash, I would actually consider buying one).

Now that's a novel idea. If only all cars in Israel were sold with LowJacks - that way, if your car has found its way to Ramallah, then maybe we could just point heavy artillery to its precise GPS location. Or maybe it's just my wishful thinking.

The level of bureaucracy in this story makes me want to bang my head against the wall. It also makes me realize how much I must love Israel that I am still planning on moving to this crazy country.

Get a Motorola Xoom

I want a Samsung 8.9 actually.

nifty. just activated that on my ipad so when i leave it on the bed and it falls underneath and i can't find it i'll know how to track it there ;)

These sound like keystone cops. Anyone in our security / law enforcement system who is up to date is apparently occupied writing stuxnet type software.

Avraham: I heard a similar story about an iPhone and some cops in California, I think.

this is the primary reason i'm not ready to move to eretz yisroel...the lack of democracy. this isn't the first dumb israeli police story (and dumb israelis that don't even realize how retarded this is). police knock on the door, they don't open, and the police allow that? in the states the police would never put up with this.

It's not that only an idiot would steal an iPad. Not everyone knows about the GPS functionality.

However, if you leave your iPad in a car, and don't have a little sign or label on it warning potention thieves of the GPS and that they could be easily caught, then you're an idiot.

Lucky for us, our 2.5 year old will never let the iPad out of his hands. They wouldn't stand a chance against him, so our iPad is safe for now.

The low jacks are not activated until you get them home, ipads anyway, and the serial numbers are only in the box so its not possible to tell if its stolen or not. Or prove what store it came from.