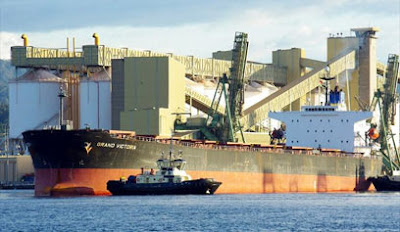 Background from Jameel: Israeli Prime Minister Netanyahu announced minutes ago that the weapons found aboard the "Victoria" -- an IDF intercepted ship bound for Gaza from Syria, originated in Iran.

Early this morning IDF Naval Commandos from boarded a cargo ship, "Victoria" -- a German owned ship, operating by a French Company, flying under a Liberian flag. We had advance intelligence information that this vessel was carrying weapons.

We boarded the ship and the crew complied without any violence. A preliminary search revealed weapons in shipping containers. The Israeli navy is now escorting the boat to Israel where a further, detailed examination of the cargo and the ship will take place.

The ship originated from the Syrian port of Latkia, and also docked in Turkey's Mersin Port on its way to Alexandria in Egypt. The IDF believes the weapons found on board were destined for Hamas in Gaza.

The ship's crew apparently had no idea there were weapons in the shipping containers, and the IDF doesn't believe that Egypt or Turkey were connected.

The current operating analysis is that Syria and Iran are the major actors, cooperating to send weapons to Hamas.

The IDF spokesman declined at this point to detail what weapons were found, but we will be find out after the ship's detailed examination.

I noticed unusual comments on some MSM media sites. They were praising Netanyahu. People liked that he (and Israel) stood up against this blatant attempt at international terrorism.

In these critical times, when nations are challenging one another and violence is increasing in an unbelievable manner, the Jews have the power to bring about peace in the entire world/
In order that the entire world should be orderly, it is essential that each and every one of the "seventy nations" should be influenced so that they will work on settling the world through spreading the Seven Mitzvos & influencing the nations to keep their mitzvos, in order to assist our task of making the world into a dwelling place for G-d, and help bring about the arrival of Moshiach. Every individual must do everything possible to hasten his coming. In order to bring awareness of these Seven Mitzvos to the world I have recently created a blog for this sole purpose
http://creedofnoah.blogspot.com

Please add this to your blogroll (& encourage your fellow bloggers to add my blog or add it to their social networking sites) to help spread the awareness of the existence of the Noahide Commandments.
Appreciated.

Israel did a good job