Scientists at the Soreq Nuclear Research Center have measured minute amounts of radioactive Iodine-131 in Israel's air. They claim that the concentration of radioactive particles is harmless to human health and the environment.

I guess it was only a matter of time before this happened. It's already been detected in other places around the world such as the US. There certainly doesn't seem to be anything we can do about it, so we can hope the scientists are right about the potential for harm.

As a result of the incident with the Fukushima nuclear plant in Japan, several EPA air monitors have detected very low levels of radioactive material in the United States consistent with estimates from the damaged nuclear reactors. These detections were expected and the levels detected are far below levels of public-health concern.

Elevated levels of radioactive material in rainwater have been expected as a result of the nuclear incident after the events in Japan since radiation is known to travel in the atmosphere. There have been reports received that the states of Pennsylvania and Massachusetts have seen elevated levels of radiation in recent precipitation events. EPA is reviewing this data – however, in both cases these are levels above the normal background levels historically reported in these areas.

If you're in the US you can use this map to find out the change in radiation levels in your area. 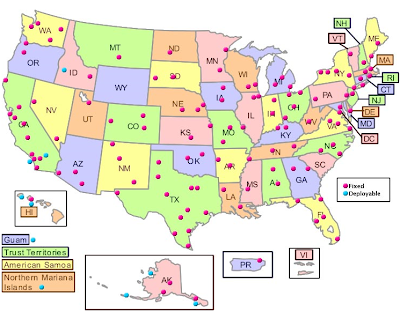 While all the scientist keep saying the danger isn't immediate, I just wonder what the real long-term damage to the world really is.

It's not just the atmosphere, the sea water around Japan has also been contaminated. That's not exactly containable either.

Is two-headed sushi going to be on our menus in the near future?

What is the price future generations are going to have to pay?

Could this be the yellow dust on my mirpeset?would it show up as dust?

The amount is too small to be seen. But if your mirpeset starts to mutate, I'd get out of there quick.

I do think it's a serious matter, but was dissapointed you did not post a picture of bliky, the 3 eyed fish.

More information to understand radiation doses and their levels.