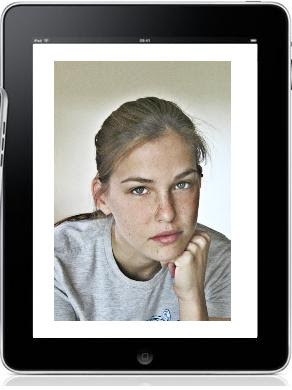 Israel's top model "Bar Refaeli" was caught yesterday (Wednesday) trying to illegally smuggle an iPad into Israel via the "Green, nothing to declare" tax-free line at Ben-Gurion Airport. (Walla)

She was fined 650 NIS for her smuggling attempt. Had she obeyed the law and declared the iPad on the "Red Line", she would have only had to pay 16.5% of the $500 price tag (about 320 NIS) for the popular Apple gadget.

Refaeli has generated quite a bit of commotion in Israel over the years, ranging from getting married to a family friend for a few days to avoid IDF service, to dating non-MOT American actor Leonardo DiCaprio.

I guess it's a slippery slope from dating outside the fold to ending up smuggling electronic devices.

i don't understand how this happened. i mean, if you were a customs officer, wouldn't you just let bar raphaeli pass on by without a perfectly legal (and entertaining) inspection by your bad self?

How do they know? I've never gotten a glance from a customs officer when walking through the green door.

I thought that customs was confiscating all of the IPads coming into the country. That's what Maariv has been reporting.

I'm so glad this happened because no one has answered my question if an iPad is considered a "second computer" when one already has one? JA said they didn't think so, but no definite "no".
When IY"H we arrive in Israel I will have to declare my iMac and my IY"H iPad AT THE AIRPORT.

I have a 2 year old 24" iMac that I thought about bringing back to Israel when I return summer. The model is not being sold by Apple anymore. Anyone here know if Mechez will try to shake me down if I go through the Green line with it ?

A beautiful girl who is really dumb about customs regulations.

And no one in Israel thinks she's a role model for Jewish women. AS they say, youth is wasted on the young.

where did you get the photo? considering that she seems to be wearing a t-shirt it's more clothing than i've ever seen her in. also, has anyone else noticed her eerie resemblance here to leo dicaprio?

here are the news links to the ipad being banned in Israel
http://www.thedigitalnewsroom.com/en/News/2778/Apple_iPad_banned_in_Israel.htm

mekubal: I was the first blogger to mention that the iPad was banned in Israel :-)

However, since then, the iPad is no longer banned...yet it is taxed.

Jonathan: do you know how long it took to find a presentable photo of her?!

jonathan becker, are you the jonathan from west virginia?