As if the "Atra Kadisha" organization needed to look even dumber, today Israeli archeologists unearthed a pagan altar "mizbeach" at the pagan graveyard -- located where the new emergency room will be built for the Barzilai Hospital in Ashkelon. 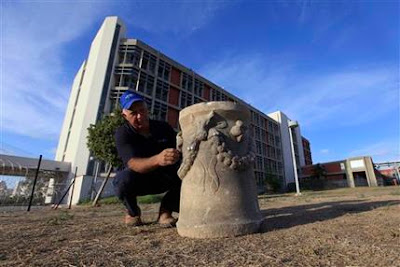 Dr. Yigal Israel of the Israeli antiquities authority inspects an ancient pagan altar that was uncovered while clearing ground for construction of a hotly disputed hospital emergency room in Ashkelon, Israel, Thursday, May 20, 2010. Israeli archaeologists say the 2,000-year old incense altar proves an ancient cemetery at the site that has been at the center of protests by ultra-Orthodox Jews does not contain the graves of Jews. (AP Photo / Tsafrir Abayov)

Of course, the Atra Kadisha is continuing their funeral for the holy bones, and the location of where they will be buried is still secret -- since G-d fearing Jews do not want pagans buried in a Jewish cemetery.

These people's stupidity and arrogance detract from their religious piety. It seems the fact thousands of Jewish lives could be saved by the new hospital does not concern them in the least. Its just a disgrace!

that thing doesn't even look real- like it was poured out of cement. and it magically appears only a day after the riots? it takes a while to properly excavate something like that- what is going on here, really? and how can we assume bones found in the vicinity of this thing are "pagan"? how can bones be "pagan"? and what kind of pagan? maybe the bones are of those sacrificed to the "pagan god", therefore "non-pagan"?

if you want to build a bomb shelter emergency room fine. if you say it's pikuach nefesh it's because we're expecting bombs. shouldn't this be the issue? because in such a case, even jewish bones may be removed. why not argue with the haredim based on the liklyhood of a need for such an emergency room, rather than what kind of bones were found? even the haredim know that even goyishe bones are to be treated with respect insofar as possible.

personally i think at this point that reinforced emergency rooms should be built all over the country, why only ashkelon? some think-tank person thinks that's the outer limit of our enemy's missile capabilities?

The presence of a "pagan" altar proves that the bones are not Jewish? Hardly a given - there can be many reasons why a pagan artifact might be found near human remains without proving that the dead people were participants in pagan ritual.

In any event, as Scripture makes abundant, and tragically, clear, there were many Jews who participated in idolatrous rituals. They are still Jews, and their remains still require proper burial.

The only thing missing from that thing is an inventory tag "Property of the MGM Props Department..."

J Becker and Gee a Moron: Here's another photo for you.

LazerA: There were also paintings found that at the gravesite which were rather "unJewish" and have never been seen before at Jewish cemeteries or burial sites (rather immodest paintings).

Of course, the bones deserve a proper burial! I don't think anyone argues with that point.

1. Why shouldnt the bones be moved so that the hospital ER could be built?

2. Why is the Atra Kadisha demanding the bones are Jewish, when that's highly questionable?

3. Why did the Atra Kadisha completely ignore the moving of Jewish graves from Gush Katif, if this issue is so near and dear to them.

yep, looks like a cement-poured version of a middle israelite period pagan altar. you know how those middle israelites liked to rock the avoda zara, right? thank hashem the jews of today are so far from this sort of behaviour.

as far as question no. 3, come on. they only had two choices, go along with it or speak against it. would you have been prepared to speak against moving those graves, given the circumstances?

or do you mean they should have spoken against the expulsion itself? quite a different issue, and really not their job.

Jonathan: And in this case, Atra Kadisha rioting was supposed to accomplish what, exactly?

I personally have no problem with moving the graves from Gush Katif...but if Atra Kadisha is so worked up about moving pagan graves, from their worldview, why didn't they riot to prevent the Disengagement, to prevent the need from having to move Jewish graves?

It's very simple. Atra Kadisha is organizing rituals to pray for "forgiveness" for disturbing "the bones of their ancestors". The Jews of Gush Katif are their "contemporaries" not their "ancestors" especially since they are not 100% Hareidi so their is no need to be concerned about them.

Another way of looking at it is that Gush Katif's political backing has been rather tenuous. The emergency room project at Barzilai has the full support of both the Netanyahu goverment and the opposition (no one wants to be on record as being against having an emegergency room) and therefore lots of money/power/prestige to tap into. They just bit off more than most Israelis are willing to tolerate. Tafasta merubah lo tafasta.

shlomo is correct, of course. but barzilai is not located on the territory of ancient ashkelon. or please correct me if i'm wrong?

so, according to you, jameel, the atra kadisha should protest any political development, anywhere in the world, that would cause a halachic necessity of moving jewish graves? heck, they know that even for building a road it's ok. look it up.(in the shulchan aruch). they're not totally stupid. in this case, they thought there was an alternative building site.

and really, isn't there? especially with all those valuable "artifacts" that seem to be popping up. :)