Why the Labor Party refuses to criticize the NIF

Though at unease about the New Israel Fund's satellite involvement with the Goldstone report, the Labor party's criticism of the NIF has been muted at best.

Defense Minister Ehud Barak: Defense Minister, Ehud Barak, who heads the Labor Party, criticized the Fund for it [Goldtsone report] but does not support an official probe of it [NIF], because, he said, the Fund does some good things for Israel, too (source)

Welfare Minister Yitzchak Herzog: We defend Israel's democratic discourse and prevent harm to various sectors, even if we don't always agree with them, such as human rights organizations and the New Israel Fund. (source)

See the following NIF letter to its board and staff by NIF Israeli director Eliezer Yaari after Ehud Barak trounced Netanyahu in the late 90's Israeli elections. 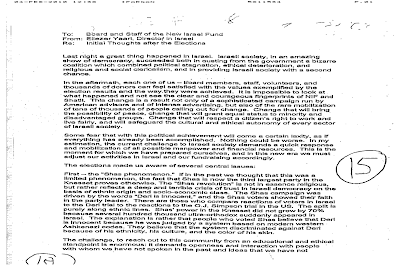 You don't want to bite the hand that feeds...