With our bodies, we will protect the graves of our fathers
AND FILL UP
THE JAILS
for their honor and to save them 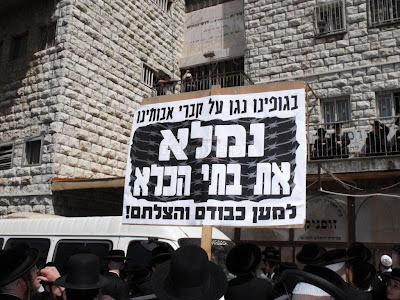 The pagan bones found at the site of the Ashkelon Barzilai Hospital have caused quite a brouhaha over the past few weeks.

Ultra Radical Chareidim (not to be confused with the non-radical Chareidim) have rioted over these pagan bones, and have stated the bones should not be moved to allow the building of life-saving emergency room, despite the halacha which allows Jewish graves to be moved.

The Jerusalem Post reported that the damage costs came out to over a million NIS.

Riots that shook the capital’s haredi enclave of Mea Shearim on Sunday night are estimated to have cost some NIS 1 million in property damage, as garbage bins, traffic lights and vehicles – among other things – were vandalized in connection with the relocation of ancient graves in Ashkelon, a Jerusalem municipal spokeswoman said Monday.

YNET now reports that the funeral procession of the pagan bones has started.

Hundreds of members of the Eda Haharedit are holding a funeral procession in Jerusalem's Shabbat Square for the bones that were evacuated from Barzilai Medical Center in Ashkelon. During the ceremony, they are asking forgiveness from those whose graves were disinterred.

Before the gathering, the Religious Affairs Ministry gave authorization to the Eda Haharedit leaders to take the bones in a coffin to the ceremony and bury them in a modest ceremony.

There's only one small "oops"

Officials on the case refused to report whether the burial will take place in the Jewish section of the cemetery.

Kikar Shabbat reports that not one burial society has agreed to bury the pagan bones...in a Jewish cemetery.

While the rioteers scream from the rooftops about the sanctity of their fathers' bones, not one of them is actually prepared when push comes to shove, to actually bury them in a Jewish cemetery.

I wonder where they will actually be buried...

What if, in actual fact, the graves were of Roman soldiers who personally took an active part in the destruction of the Beit HaMikdash?

And what if this whole moving-of-their-graves thing was divinely intended as part of their atonement?

They put me through hell to prove I was Jewish when I made aliya.

And yet, they insist the pagan graves are Jewish?

This leaves me with two questions:

1. How did Atra Kadisha and the Eidah Chareidis get the bones? Wasn't the Antiquities Authority supposed to swiftly re-inter them somewhere appropriate?

2. Also, how does this all fit into the Agudah/Degel v. Eidah Chareidis power struggles? Originally the cause was championed by Agudah/Degel but now the protesting/rioting is run by the Eidah Chareidis. Are they both on the same side of this one? Or is the Eidah protesting just to show they are frummer than Agudah/Degel, who ultimately lost on the issue in the government?

Its funny the haredi make such a fuss over dead pagans. But they wouldn't allow me, a B'nai Noah - to ever be buried in a Jewish cemetery because I can never be a halachic Jew in their eyes. The hypocrisy of supposedly G-d fearing people remonstrating on behalf of dead idolaters gets to be too much handle!

It's tempting to portray (as you did) the refusal to bury supposedly "Jewish" bones in a Jewish cemetery as contradictory. But I think you're missing the point. They are taking the position that there is a good possibility that they are Jewish. Thus, they have to take the "chamur" position both ways - can't move them, since they might be Jewish; can't rebury them in a Jewish cemetery, since they might not be Jewish. That kind of logic is not unheard of in Jewish law (hooliganism is a different story).

Yoni R: Taking the position that the bones might be Jewish? Have you seen the pictures from the gravesite?

From what I've read, the gravesite is replete with pagan imagery, as well as rather "inappropriate" paintings of men and women.

The Atra Kadisha has decided that not only are the bones those of Jews, but "of their forefathers."

The entire case is irrelevant because Jewish or not, the bones can be moved.

Yoni: Don't you find it the slightest bit hypocritical that when it came to moving the bones of the Jews sfrom Gush Katif, in which everyone knew they were actually Jews, the Atra Kadisha couldnt be bothered to even issue a pashkevil.

And here, where its 99.9% certainly the bones of the pagans, the Atra Kadisha turns this into a media circus?

Jonathan: We aren't supposed to hate any hareidim.

We can hate the behavior of the Atra Kadisah and their hypocracy, but there's no reason to hate them.

Now you're changing the subject. Your post was pointing out an inconsistency in their positions - Jewish enough to protest, but not Jewish enough to be buried in a Jewish cemetery - not the veracity about either of the claims. (The whole screaming about their "forefathers" was chareid-style rhetoric, and I think you know that.)

I wasn't commenting on the correctness of either of those positions, just how the apparent contradiction is not really a problem.

There's a lot that stinks about this whole mess. The "ooops" you pointed out is not one of them.

Yoni: They were certainly clear enough in the photo in the post -- which says "the bones of our fathers".

Its definitely an "oops" when they riot on the account of the bones belonging to Jews, yet no one was willing to bury them as Jews.

The answer is obvious - the rioting is from a small group of wackos who will champion any cause that pits the government against Torah, along with a larger group of people who like to riot at any opportunity. The chevra kadisha people are neither, or at least not the first.

Jameel: The Atra Kadisha has decided that not only are the bones those of Jews, but "of their forefathers."

yoni r.: The whole screaming about their "forefathers" was chareid-style rhetoric, and I think you know that.

It's funny how you try so hard to argue that the haredi position is not, in fact, inconsistent. When Jameel provides a counter argument showing that it's completely inconsistent -- they state outright that these are their own "forefathers", and yet they refuse to bury them in a Jewish cemetary -- your response is that this is just "chareid-style rhetoric". What the heck is that supposed to mean, exactly? That haredi rhetoric is self-contradictory? In that case, you've just proven Jameel's point to a tee.

Jameel: Don't you find it the slightest bit hypocritical that when it came to moving the bones of the Jews sfrom Gush Katif, in which everyone knew they were actually Jews, the Atra Kadisha couldnt be bothered to even issue a pashkevil.

No, he's not. The main point here is that the Atra Kadisha's position is disingenuous. They themselves don't actually believe what they are stating to the public (i.e., that these are Jewish bones). This is illustrated by the fact that they refuse to bury them in a Jewish cemetary, and it is also illustrated (perhaps even more dramatically) by the fact that when the bones of Jews in the Gush Katif cemetary were moved, the Atra Kadisha didn't care enough about it enough to even mutter a single peep. The Atra Kadisha are disingenuous hypocrites, and that is the subject. Nobody changed it.