PA to Arabs: No Shopping at Rami Levy Supermarkets 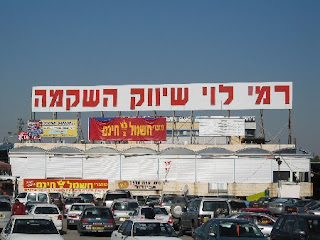 I guess this is a case of "Is the shopping cart half empty, or half full?"

One of the most resourceful reporters at the JPost, Khaled Abu Toameh got this scoop last week:

Thousands of Palestinians routinely shop at Rami Levy supermarkets at Sha’ar Binyamin and Mishor Adumim, the only two branches in the Shomron. The two stores also employ dozens of Palestinians. A third mega branch is being constructed in Gush Etzion as well.

This was the first threat of its kind issued by the PA against Palestinians who visited the Israeli supermarkets, which are named after their founder.

"Abu Libdeh said in an interview with the local Al-Watan TV station that the PA knew the names of individuals and families who shop in the Rami Levy stores.

He condemned the phenomenon of Palestinians buying goods at the Israeli supermarkets in the West Bank as a “big disgrace.”

Abu Libdeh said the PA was serious in implementing the decision to boycott settlement-made goods. Nevertheless, he denied that the boycott was politically motivated or had anything to do with the resumption of indirect negotiations between the PA and Israel.

The boycott was intended to “cleanse” the Palestinian market of settlement products and boost Palestinians’ confidence in their national products, he said." JPOST

On the bright side, the PA Minister didn't level any death threats to those buying in Jerusalem's South Eastern Talpiyot industrial zone. Could the PA have already accepted that Talpiyot (or at least the Rami Levy supermarket there) is part of Israel? After checking the Rami Levy website, I see there are also branches in Ramot (North East Jerusalem), Beitar Illit (Northern Gush Etzion). Or, itt could be the JPost article didn't fully explore all the locations of Rami Levy supermarkets...

Regardless, once again the Palestinian Authority is willing to inflict suffering on the average Arab, by forbidding their shopping at Rami Levy which has lower prices, and of course, killing their livelihoods by forbidding Arabs to work at Rami Levy, or at any Jewish owned business over the "Green Line."

It goes without saying that a reciprocal boycott is bound to happen.

I wouldn't complain, it will make the lines much shorter.

On the bright side, the PA Minister didn't level any death threats to those buying in Jerusalem's South Eastern Talpiyot industrial zone. Could the PA have already accepted that Talpiyot (or at least the Rami Levy supermarket there) is part of Israel?

Incredibly, there are no fewer than 3 Rami Levy supermarkets all stuffed into the Talpiot industrial zone: The one on Rehov HaUman, the one in the Rav Hen building, and the one in the Kenyon Yisrael building. And they're currently building a 4th one(!) -- at the corner of Derekh Hevron and Rehov HaOfan...

You know what? I think this is a good thing for them. If the PA really follows through with this, it will put them in a serious sink or swim situation. Either they will build their own economy and goods and services by a forced boycott, or their economy will totally collapse, and the people will rally against the PA's policies.

I think it didn't happen in Gaza after Israel left b/c of the power of Hamas. Fatah is much weaker, and this will be a lot bloodier. Obviously, the PA is doing this as some sort of political statement that will cost the average Palestinian, of which they couldn't care less about, dearly. On the other hand, it could force the Palestinians to discover their true meddle. Can they innovate and create a successful economic system that's not based on foreign aid and government hand outs?

If, though I don't think it'll happen, they really go through with this, we'll really get to see what a future Palestinian state would look like, economically.
-OC

You mean the Israeli Apartheid system does not prohibit them from shopping there?

Rami Levy is becoming the Harris Teeter of J-m (only Charlotteans would get that).

the rami levi in shilat doesnt seem to have many arab shoppers, but lots of knife wielding arabs at the butcher section. i always envision an action movie of these arabs jumping the counter with their butcher knives and the settlers shooting them with their pistols, kind of a modern day 'western'

We shopped at the branch in Mishor Adumim yesterday (the "Day of Rage" declard by the PA. As usual there were a large number of Arabs shopping and at work as usual. The atmosphere was all around pleasant.