Fighting on all Fronts

Throughout Israel's history, its most difficult wars were when fighting on multiple fronts. The Yom Kippur war's dual attack by Syria in the North, and Egypt in the South made it a huge military challenge.

Today, while the Egyptian front is quiet (though don't fool yourself into thinking that Israel's eyes and ears aren't carefully watching Egypt 24x7), we have multiple threats on all fronts:

Gaza; infiltrations, short range rockets, border attacks.
Lebanon: Hizbolla long and mid range rockets that can hit almost anywhere in Israel. Threat of infiltration from Lebanon of multiple commando units into Israel.
Yehuda vShomron: Palestinian terror and PA police can potentially disrupt not only life within Yehuda v'Shomron, but could terrorize the seam communities of Israel's central region including the Gilboa, Hadera, Sharon, Greater Tel Aviv, Jerusalem, Yehuda Regional Council (Beit Shemesh area) and the South Hevron Hills.
Iran: Their nuclear program has almost produced enough enriched plutonium for a bomb and they have an advanced rocket delivery system as well.
Egpyt: Al Qaida or splinter cells could launch attacks on Eilat as we witnessed a few weeks ago.

Within Israel, we have Israeli Arabs that would potentially cause local disturbances -- as seen during the second Lebanon war and during the Cast lead operation, when violent rock attacks on Israel's highways caused damage and injuries.

Yet we also have other fronts to worry about.

In Ralph Peter's opinion piece about the new antisemitism in America, he writes:

Go back to the bordello side of all this: Wealthy Arabs have bought a great deal of influence in Washington, lavishing money on think tanks, contracts on US firms and expensive gifts on individuals. (A few years back, one American "authority" on the Middle East delightedly told me that he'd been given five Rolexes.)

In contrast to these ingratiating, deep-pocketed Arabs, Israelis are brusque and dismissive, relying on American Jews to smooth things over. Well, sorry, Israel needs to rediscover public relations. With the global media rabidly pro-Palestinian, Israel had better get back in the information fight.

We are fighting the PR war on all fronts as well.

The radical anti-Zionist, Noam Chomsky tried entering Israel today via the Allenby bridge to to deliver a lecture at Beir Zeit's university. He was delayed at the border crossing for more than four hours. (source) After he was denied entry, Chomsky likens Israel to 'Stalinist regime' It’s very amusing to hear a radical leftist like Chomsky using the term “Stalinist regime” as an insult. While Stalin was actually around, they called his regime paradise on earth… Regardless, poor Noam Chomasky can have a relaxing day for a change.

We have Anat Kam allegedly giving classified documents to Haaretz for publication (and losing some along the way), which seriously damages State security. We have Israeli Arabs allegedly cooperating with Hizbollah, committing espionage.

And to top it all off, we have radical Hareidim fighting tooth and nail against moving pagan graves so that an emergency room can be built, which will save lives (including those of Hareidim). Here's Radical Hareidi Naval Commandos trying to get to Ashkelon, to protest the moving the "bones of their forefathers" (Does that make these Hareidim, pagan as well?) 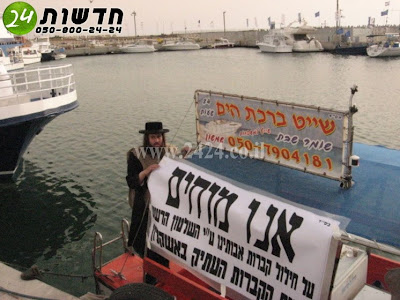 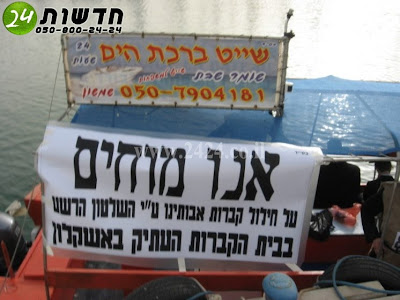 We Protest
the desecration of the graves of our fathers by the Evil rulers
in the ancient cemetery of Ashkelon
I guess after 2000 years, it was to be expected that life wouldn't be simple here.

It's amazing that these haredim had no problem when JEWISH graves in Gush Katif were uprooted...

Porush and Liztman would rather fight over Pagan graves than Jewish ones from Gush katif, because they want the hospital moved to Ashdod, where the building site is owned by Ger.

Their support for this lunacy is a Chilul Hashem.

Where are these Chareidim as the yeshiva in Yitzhar is about to be destroyed by the government? Isn't a living, functioning yeshiva more important than pagan graves?

TZ beat me to it.

Even if they were Jewish, there'd be no reason (halakhically) not to move them. We lose to them when we argue only "If they weren't Jewish.."

NG: 100% not Jewish, yet that's entirely irrelevant, since all graves can be moved, except those of a Navi or King.