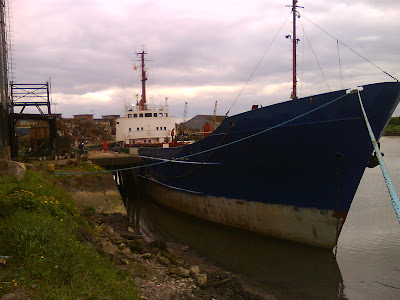 Peace-Anarchists announce that their luxury liner, the MV Rachel Corrie, (a 1200-ton cargo ship), is part of the eight-vessel "Freedom Flotilla" on its way from Ireland to Gaza.

In the past week, reports from Israel have indicated that the Israeli authorities will not allow the Freedom Flotilla to reach Gaza with its cargo of much-needed reconstruction material, medical equipment, and school supplies. According to Israeli news sources, clear orders have been issued to prevent the ships from reaching Gaza, even if this necessitates military violence.

The Free Gaza Movement, which has launched eight other sea missions to Gaza, confirms that Israel has tried these kinds of threats and intimidation tactics before in order to try to stop the missions before they start. “They have not deterred us before and will not deter us now,” said one of the organizers.

Ship to Gaza -- Sweden, a Freedom Flotilla coalition partner, together with parliamentarian Mehmet Kaplan (Green Party) yesterday asked for an audience with the Minister of Foreign Affairs of Sweden, Carl Bildt, to discuss what measures the Swedish government and the European Union will take to protect the Freedom Flotilla’s peaceful, humanitarian voyage. Earlier this week during a meeting with the European Campaign to End the Siege on Gaza – another coalition partner, Turkish Prime Minister Tayyib Erdogan expressed his support for “breaking the oppressive siege on the Gaza Strip...which is at the top of Turkey’s list of priorities.“

Who are these peace anarchists on their way to visit? Watch this video...

The question is: Will the Peace Anarchists have a pancake breakfast with Hamas leadership?

Read more about the Flotilla of Fools at the Elder of Zion.

It will be rather ironic if (when) one of the ships would hit a Hamas mine on the way ...

I'll be surprised if the dhimmi Jews stop them - the ones who live in fear of the Obamatron!

nice video, thanks. u think anyone will listen? of course not.

and when did you start caring so much about how the pals are oppressed by their own? in spite of my own proud jewish american liberal credentials, i have a hard time caring myself. i mean, they elected those bastards. let them stew, as they watch the contents of those ships be stolen by hamas to line their own pockets.

oops. so much for my liberal credentials.

It's hard to tell the difference between the Muqata and LGF these days.

Has the Muqata gone as far left as that formerly RW site?

This is why G-d created torpedoes. And mines.

so does israel have a floating bulldozer?