Got the following from a reader, DC:

Hi, Jameel.
Could this caption be correct? 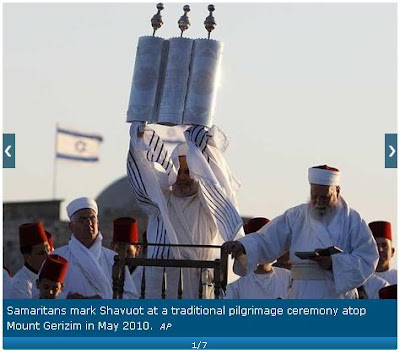 A quick Google check revealed that not only did Haaretz incorrectly caption the AP photo as part of an alleged 2010 Samaritan Shavuot celebration, but so did many other news sites as well; for example, here, here, and here.

Reuters even has a whole slide show devoted to the [alleged] Samaritan Shavuot Celebration on May 5, 2010!

"Members of the Samaritan sect wait atop Mount Gerizim at the beginning of their traditional pilgrimage ceremony marking the holiday of Shavuot early May 5, 2010. The Samaritans, who trace their roots to the biblical Kingdom of Israel (in what is now the northern occupied West Bank), observe religious practices similar to those of Judaism. Credit: REUTERS/Nir Elias"

So why was May 5th definitely NOT the Samaritan Shavuot?

1. The Samaritans always celebrate Shavuot on the Sunday that occurs 49 days after the Saturday following their Passover ceremony. This is in accordance with the Samaritan understanding of Vayikra/Leviticus 23:15, which says:

And you shall count for you from the morrow of the day of rest, from the day that you brought the omer of the waving, they shall be seven complete weeks.

The Samaritan religion counts 7 weeks following the "day of rest", which they (like the Sadducees and the Karaites) interpret as Shabbat -- so their Shavuot will always be celebrated on a Sunday. (In Judaism, we understand the "day of rest" as a reference to the first day of Passover, and therefore we begin counting the 7 weeks on the second day of the holiday.)

The problem with all the reports above...is that May 5th 2010 was a Wednesday.

2. As we reported extensively on the Muqata blog, the Samaritan Passover was celebrated on Thursday April 28, 2010. The Saturday after April 28th is May 1rst. Counting 7 complete weeks 49 days, brings us to Sunday, June 20th -- which hasn't even arrived yet.

3. If there is any doubt left: The Samaritans' official website states:

So what are all these stories and photographs of?
I placed a call to one of the Samaritan priests, Yefet Cohen, who lives in the Samaritan community on Mount (Har) Gereizim and asked him about this mystery holiday.

He stated unequivocally that the Samaritan Shavuot holiday was coming up in 28 more days; June 20th. So what could that "photo-op" on May 5th have been? It took a few times for us to understand each other.

Apparently, word got out that there was going to be a "photo op" of some Samaritan service, so AP, Reuters and others came for the show. Since May 5th was only a week before the Jewish Shavuot festival, the no so careful fact checkers (Haaretz included) decided that it made sense for this holiday to coincide (roughly) with the Jewish one.

Don't let facts get in the way of a good photo op!

The blame also goes to the photographers who submitted these factually incorrect bylines with their photos: Nir Elias (Reuters), Alaa Badarneh (EPA), Oliver Weiken (EPA) and others.

excellent reporting, you go to the source. kol ha kavod!