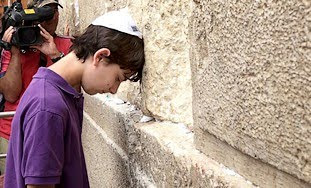 The Muqata Blog wishes a hearty "Mazal Tov" and congratulations to Rahm Emanuel on his son Zack's bar mitzva celebration today (Sunday, May 30).

The JPost reports that the bar mitzva ceremony for White House chief of staff Rahm Emanuel’s son Zach and his nephew Noah took place Sunday at the southern wall excavations area near the Western Wall.

On Sunday, both Emanuel's son and nephew read from the Torah portion of the week and gave a D'var Torah.

Twenty to thirty well dressed friends and relatives attended the ceremony, including Catholic relatives of Emanuel's wife Amy and former Ambassador to the US Itamar Rabinovich. (JPost)

Last week, in poor taste, right wing activist Itamar Ben-Gvir heckled the Emanuel family when they visited the Kotel in preparation for the Bar Mitzva.

Ben-Gvir even petitioned the Jerusalem District Court to prevent the bar mitzva from taking place at the Davidson Center near the southern excavations of the Wall because the center lacked a license. The Jerusalem municipality said no license was needed because only prayers would take place.

Ben-Gvir said he was overjoyed by the municipality’s response, because he interpreted it to mean that no catering or music would be allowed at the Bar Mitzva. (JPost)

Ben-Gvir should have simply celebrated the bar mitzva, instead of heckling, by observing the time-honored Jewish tradition of throwing candy and keeping his mouth shut.

Wishing the Emanuel family a mazal tov, and hoping they come back often to visit Israel's united capital city of Jerusalem.

On Sunday, both Emanuel's son and nephew read from the Torah portion of the week ...

I don't get it, Jameel. Why are you so against what Marzel & Co. were trying to do? They were just trying to point out that one who wishes to divest Israel of half of its United [FOREVER!] Capital, doesn't deserve to celebrate a family event there...

Maybe it was the Emanuel family good-bye visit. One last look before they give it away to our enemies.
Or maybe it awakened some tiny spark in what's left of his Jewish soul and he will realize the severe error of his ways.

Yitz: Look at that poor kid, with his head bowed at the Kotel.

He's probably thinking, "Dear G-d, Why can't everyone just leave me alone and let me celebrate my bar mitzva like any normal kid."

He shouldn't have to pay the price for his father's political opinions.

Do you honestly think he should be punished?

The reference to the Catholic family members of Mrs. Emmanuel was not necessary. There is a certain statement in the mishnah about reminding a convert that he/she is not a born Jew. It is not very supportive of such behavior

The reference to reading the Torah on Sunday was not necessary. There is a certain statement in the mishnah about loving one's fellow Jew as themselves.

It is not very supportive of such behavior

Jameel: Your reference to "Twenty to thirty well dressed friends and relatives attended the ceremony," while posting a photo of Zach wearing a plain purple polo shirt at the Kotel was simply uncalled for.

Did you really find it necessary to write such a snarky posting about Zach Emanuel?

"bar mitzva ceremony...Sunday at the southern wall excavations area near the Western Wall."

Was it really so crucial to mention that the ceremony took place at the "southern wall excavations area" where the "women of the wall" pray?

Instead of simply writing the "Western Wall", you added the stigma that he was forced to celebrate his ceremony elsewhere, like a leper.

Though I am impressed you didn't manage to implicate the New Israel Fund in this posting like you usually do.

No wonder your readers are leaving in droves.

Again, it's hard not to point out that if there were an internet before churban bayit sheini, it would sound a lot like your blog.

HEY MUQUATA: WHY DID YOU FIND IT NECCESSARY TO SUPPORT THAT RIGHTWING WACKO BEN-GEVIR???

CAN'T YOU GIVE THAT BARMITZVAH KID A BREAK????

Anonymous: The reference to the Catholic family members of Mrs. Emmanuel was not necessary. There is a certain statement in the mishnah about reminding a convert that he/she is not a born Jew. It is not very supportive of such behavior

I, for one, had been completely unaware of the fact that Amy Emanuel was a convert, until I read your comment above: The JPost article that Jameel quoted made no mention of that, nor did Jameel say that she was a convert. In other words, you were the first person to come along here and inform everybody that she is a convert. It would appear, then, that you, not Jameel, are in violation of the Mishnaic prohibition that you yourself cited. Shame on you.

Jameel, you're a jerk. By what right are you trashing Itamar Ben-Gvir? He's a courageous Jew, who did nothing more than speak the truth against an anti-semite. You don't deserve to shine Ben-Gvir's shoes.

Every day, the Muqata blog is turning more and more leftist. A lot of us can barely stomach it anymore. One more post like this, and I'm going to stop reading it for good.

Jameel: Was it really necessary to mention that Rahm Emanuel is having his son barmitzved at the Davidson Center? Everybody knows that the Davidson Center is an extremist right-wing outfit affiliated with the Likud, whose purpose is to disseminate Israeli propaganda to make tourists think that the Temple Mount belongs to the Jews. We're not stupid, you know: We can tell what you're trying to insinuate by making a point of the fact that Rahm Emanuel held his simcha there - that the Obama Administration is controlled by the Zionist lobby. Your slander and hatred is shameful. It's obvious that you're only saying this becasue Barack Obama is an African American. You're a racist, just like all your fellow Israelis.

Jammers: You really dropped the ball on this one.

The reference to the Catholic family members of Mrs. Emmanuel was not necessary.

It seems to me that all Jameel did was copy/paste and attribute that tidbit of info to the Jerusalem Post.

Where the hell have all these idiotic comments come from, castigating Jameel for writing a straightforward mazel tov posting?

You should all be ashamed of yourselves.

those rules dont apply to goyim like his wife and son

Jameel: Just because you spent the whole day posting garbage about IDF terror troops marauding against the peace flotilla, it doesn't mean we've forgotten how you tried to trash Zach Emanuel's bar mitzvah.

Too bad you werent one of those soldiers going down a rope onto the boat.

Jameel: can you PLEASE prove to everyone that I did not write the above comment, by checking my IP URL STATIC BIG MAC address?

I thought that BIG MAC addresses were treif?