There's been a marked escalation of Palestinian rock throwing lately on the roads.

The Jerusalem Post caught some attacks on video in Hevron -- as Palestinian kids throw rocks at their neighboring Jewish homes.

And then, there are rock attacks on Jewish motorists. Last week, on one of the primary roads in the Shomron, there was a rock attack directed at an Israeli motorist. While the vehicle was traveling about 90 kilometers an hour (about 55 mph), a Palestinian threw a rock at the car, which smashed through the windshield, hitting the driver in the face.

"Luckily" for the driver, the rock grazed the side of his face, cutting it open deeply, resulting in a moderate facial and head trauma. The emergency medics arrived quickly on the scene, and helped bandage up the driver and load him onto the arriving ambulance.

The driver is lucky. An inch to the left and the rock would have hit him squarely in the face, which most likely would have killed him.

After he was transported to the hospital's trauma room, I took a photo of his car. 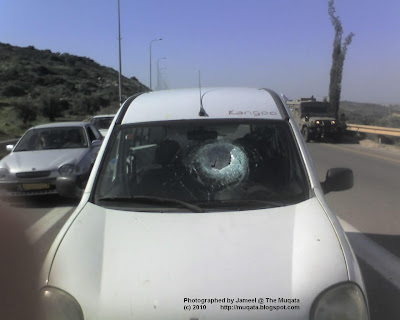 It's an interesting opportunity to turn back the clock.

I first came to Israel during the "Original" Intifada, the Arab weapon of choice then was a rock fired from a slingshot (not "Thrown").

Instead of stopping the rock attacks, many Israeli drivers got rock-proof glass and we erected fences near common rock-firing locations.

The result was that they found more lethal ways to fire rocks and from a wider range of locations, we responded with more reinforced glass and metal grates on cars and more fences.

In Gaza they started with rockets, so we built rocket-proof shelters, and more fences.

I wish that we'd stopped them when it was only rocks - is it possible that history is offering us a second chance.

If only our legal system agreed. If a settler G-d forbid, uses a gun to shoot at those throwing rocks at him, the police (and prosecution) will go after him full force.

BTW: I *always* tell kids all the time that no matter what Palestinian may do -- we should NEVER throw rocks at cars (or people).

Jameel, did you bentsch gomel? Did you see the article on A-7:
http://www.israelnationalnews.com/News/News.aspx/135627

Neshama - it wasnt my car...and I dont bentch gomel as an EMT on the scene...

When I was a kid, I was in a nearby park. Two kids were playing by throwing rocks at each other. When they saw me, they both started throwing rocks at me. I have no idea why. Now, these were big rocks like they throw here. These were small rocks that were used to line the park. Nothing, right? One of the kids hit me in the shoulder, and the rocks busted a bunch of veins, which are still visible now, 15 years later.

Sympathizers have this romantic vision of the Palestinians throwing rocks in the David Vs Goliath light; harmless rocks for freedom versus evil gun wielding occupiers. Let them get rocks and boulders thrown at them and see what the damage is. This is equivalent to the harmless "home-made" rockets that get the Jews all riled up for no reason. They say home-made like Hammas were lobbing cookies and muffins at the Israelis.
-OC