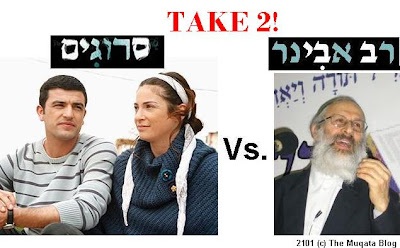 Its unsure who won round one of R' Aviner vs. Srugim, but round #2 is going to be messy.

The Maaleh Religious Film School's website has an Q&A section. (Laizy Shapiro, the series director and screenwriter is an alumnus of Maaleh.) A question was posed to R' Aviner who filmed his response:

Question: Respected Rabbi. Why does the Rabbi forbid watching the "Srugim" TV series? Finally, a religious director gets up and directs Jewish content, why shouldn't we support him? What is the forbidden content [in the series]?

R' Aviner's answer is as follows:

"I havent seen this series,but I have read the reviews [J@TM: I wonder if he reads the Muqata?] I understand it isn't good."

"The show arouses the senses. it is not modest. One shouldn't involve themselves with such base things. The yetzer hara is good enough at this without needing additional encouragement"

"The show is libelous against the religious Zionist sector."

Clearly, R' Aviner wants Maaleh graduates to sugar coat any and all depiction of religious zionist life in Israel. You can't film or write about the life of religious singles in Jerusalem, divorce, agunot, or abuse.

R' Aviner is a Gadol BaTorah. Why don't you listen to him, and stop writing about this stupid (and assur) TV series?

Doesn't R' Aviner realize that his psak will simply goad more people to watch the show?

There's the tantalizing arousal of srugim, the yetzer hara...and R' Aviner is at the top of the list.

Oh, for heaven's sake. Watch it if you want. If it offends you, don't.

No one is allowed to watch it, which is why I issued my psak halacha.

"I havent seen this series, but I have read the reviews."

Ah, yes, of course. And why should he possibly need to know any more than that in order to issue a psak halakha?

This would hardly be the first time that R. Aviner issued a psak about something with which he was unfamiliar. See this letter from R. Avraham Shapira zt"l, R. Mordechai Eliyahu, R. Dov Lior, R. Yaakov Yosef, R. Nechemia Goldberg, R. Nissim Kareliz, and R. Shlomo Fisher. (An English translation is here.)

Perhaps someone should also ask R. Aviner whether he is even qualified or permitted to issue halkhic rulings in the first place. The answer to this question, in writing, from R. Dov Lior, R. Yaakov Yosef, R. Avraham Yitzhak Kalev, R. Elyakim Levanon, and endorsed by R. Nissim Kareliz, R. Shlomo Fisher, and R. Dov Levine, can be found here. (An English translation is here.)

From the clips of the show that I've seen, it seems to have a good deal of sexual tension and even the crossing of some lines. From what I've read, certainly a major theme is the sexual tension among singles.

This is an important topic but tzeni'us requires that it be dealt with in private.

I completely agree with Rav Aviner, even though for me this isn't a religious issue but an issue of good taste and common sense. As I wrote here before, the show is mediocre at best and does nothing to portray the life of religious people in Israel in a realistic manner.

And Gil Student is right - sexual tension among singles is the major theme of the show. It's as though there isn't anything more interesting going on in Israel... I guess we should be thankful that the show isn't exactly the standard run of the mill anti-religious, self-hating tripe that dominates TV in Israel. But I don't think we should be lowering our standards that low.

R. Aviner's "psak" against watching Srugim is reminiscent of his "psak" against reading the book Mekimi in which the author, former television star Noa Yaron-Dayan, describes her journey toward religious observance. Yaron-Dayan's book has garnered abundant praise throughout the religious world, and even part of the haredi world. Countless readers, religious and otherwise, have found this book to be profoundly evocative and soul-stirring. R. Aviner, however -- who admitted that he hadn't even bothered to read the book -- denounced it as "inappropriate", "superficial"(!), and "immodest", and he prohibited reading it. See here for more details.

I don't understand this whole miceh? What is being objected to? IMHO I think some with "Pinchas-like fervor "protest too much" i.e.,
"Protest too much" comes from Hamlet by William Shakespeare; the Queen speaking: "The lady doth protest too much, methinks." To "protest too much" is to insist so passionately about something not being true that people suspect the opposite of what you are saying."
Sometimes the one who 'protests too much' harbors the same that s/he protests! The whole world is in a 'bossy' state of mind. (middas hadin)

I find it astounding, btw, that the Maaleh Film School has a regular Q&A section featuring R. Aviner: His hashkafa is diametrically opposed to that of Maaleh. Perhaps someone should submit the question, "Is it permissible to attend the Maaleh film school?" I imagine he'll say that it's completely assur.

Ther truth is that I have a son learning in yeshiva and I told him, you know this new episode of Srugim is not really suitable for you (not did he see the mikva episode of the first series).
But this does not detract
a. from the fun we have watching it and b. From the fact that this series allows people who are not religious to see aspects of religious life.
If you are a very religious person who makes sure not to see TV under any circumstances (such as those Rav Aviner might be speaking to), why should you make an exception for Srugim (so maybe you have taken Rav Aviner's words slightly out of context, since if he is talking to people who barely see the news and do not own TVs.....then why should they make this exception?)

i.e. who is he forbidding from seeing it, if pupils of his ateret cohanim yeshiva, so what do you want from him?
If he is forbidding those who are of the same relgious views and hashfkafa as he has, so again, you must admit that there are some problematic things here for people to see.

If the man in the street? well they won't listen anyway!

It's worth noting that Rav Aviner has a blog in English (one of his students posting shiurim). It can be useful to get a taste for his positions. Here.

It seems to me that some of what's going on is charedi competition - proving that his stream can be really strict too. The occasional offhand insult to charedi groups is posted as well, though usually conveyed as "the position of our teacher Rav Kook".

Personally I thought it was required for a judge to be fully informed before making a judgement - so I don't understand how one can pasken against a particular show based on reviews (and we all know how accurate reviews are).

BTW, I was in Bnei Brak yesterday and saw billboards for Srugim there. heh.

keren: i.e. who is he forbidding from seeing it, if pupils of his ateret cohanim yeshiva, so what do you want from him?

But it's on the Q&A section of the website of the Maaleh Film School!

In Round #1, Rabbi Aharon Rakeffet was referenced as a potential alternative opinion to Rabbi Aviner since Rabbi Rakeffet does not support a blanket prohibition against TV, although he does advocate being very selective.

I wonder if anyone has asked R' Rakeffet what his thoughts are?

Watch it, and if it offends you, then change the channel. We don't need permission from someone else. Equates to spilling the seed people. When will Israel wake up?

1. R. Aviner is know to be machmir on Tzeniut issues, relative to other RZ rabbis.

2. Jameel, are you sure the Ed Ministry has banned Revadim? Just last year, I saw a Mamad school use it for 6th-grade Mishnah, and the new Jr. High Yeshiva in Elkana has been presented as the flagship school for Revadim.

What astounds me is the general attitude toward the idea of a halachic psak as it emerges from the story and from the comments. The only comment I can endorse wholeheartedly here is Gil Student’s: “This is an important topic but tzeni'us requires that it be dealt with in private.”

I would say that not only issues of modesty, but all halachic issues must be dealt with in private.

In my humble opinion, halacha does not exist in books, nor in articles, and certainly not in websites. Halacha is—exclusively—the product of a question from a Jewish person to his/her unique religious authority, and the response.

Halacha is never, ever, a standalone notion, disembodied from its specific source, both the questioner and the responder. That’s how the verses in Deuteronomy (17:8-13) set it up. The process is: you run into something you can’t decide on yourself, you approach your chosen religious authority and inquire, they answer you in a highly specific and personal way, you then must follow their instruction, no matter how outlandish it appears to you. If you don’t, you’ll be punished.

Add to that the statement in Avot 1:6, Get for yourself a religious master (rav), and it becomes clear that the notion of an SMS approaching a rabbi to issue a halachic psak, followed by a website approaching the same rabbi, is absurd. Whom did Rav Aviner issue the psak for? An SMS? Did he have a specific Jewish person in mind or did he decide universally, based on the merits a show he had not watched?

The entire affair, top to bottom, was a colossal waste of time and brain space. If I have a doubt regarding a TV show, regardless of my affiliation, I would call on my rabbi and ask. And he, knowing me and my specific background and circumstances, will offer an answer that would facilitate my private behavior as a God fearing Jew.

We don’t issue fatwas in halacha, and we don’t use a Page 6 attitude about what is, after all, Avodat HaShem.

Next item that Rav Aviner will be banning is Sefer B'reishit because of its "arousal of senses" and its "immodesty".

Srugim is addressing issues that are facing young religious people and there is no point "sticking your head in the ground".

I would suggest that Rav Avineri watch the show and answer some of these issues in his SMS column!

I think that raw aviner won because is more interesting and this tv serie has more action and audiovisual effects, but srugim is a very good tv serie too, so, i think that is going to be a good fight.