Plastering over the Prophet Yechezkel 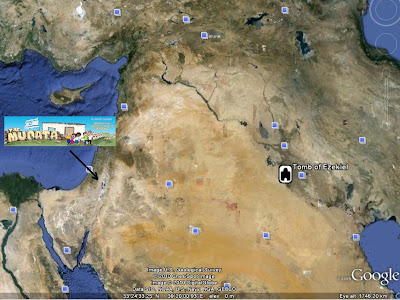 The tomb of the prophet Yechezkel, according to Jewish tradition, is located in the Iraqi village of al-Kifl, along the banks of the Euphrates river (By the rivers of Babylon, there we sat and wept when remembering Zion...)

Over 2,500 years ago, Yechezkel preached to the Jews who had been exiled from Israel to Babylon. Some believe that al-Kifl is the site of the great Yeshiva Academy of Sura, where the Talmud Bavli (Babylonian Talmud) was that codified.

The famous traveler Benjamin of Tudela visited Ezekiel’s tomb in the 1170, the earliest written account of its existence. His trip report states that the synagogue attached to the tomb contained a torah scroll written by Ezekiel himself along with books from the period of the first Temple in Jerusalem. In the 1300s, Muslim officials turned the synagogue on the site into a mosque, which was ruined by flooding in 1778 (though the minaret still exists). Until the 1820s, Jews were banned from passing through the external courtyard to the tomb.

In the 1840s, Jews reclaimed control of the site after appealing to Ottoman authorities. A yeshiva with scholars from Baghdad was established, and craftsmen from nearby Hilla and other cities settled there. Disputes over the site flared up again in 1860 and the 1930s, when the synagogue was taken over briefly by Muslims. To try to resolve tensions, Jews and Shi’a had different prayer times inside the shrine.

The shrine is located off a covered market established by local Jews. In fact, many stalls owned by Jews who left in the early 1950s remain empty. Decayed Jewish homes and store rooms also remain along the back side of the shrine. The entrance from the market opens onto a courtyard of mud buildings with olive, palm, and fig trees growing in the center. The small rooms surrounding the courtyard were used a guest rooms by Jewish pilgrims, who would come in large during important holidays, including Passover, Sukkot, Shavuot, and the period between Rosh Hashanah and Yom Kippur.

Adorning the room of the tomb, was the following Hebrew inscription. 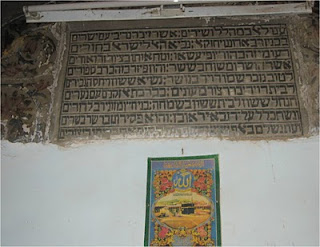 Past tense, "was". Two weeks ago, the Jerusalem Post reported:

Recently "Ur," a local Iraqi news agency, reported that a huge mosque will be built on top of the grave by Iraq's Antiquities and Heritage Authority, while Hebrew inscriptions and ornaments are being removed from the site, all as part of renovations.

Prof. Shmuel Moreh of the Hebrew University of Jerusalem, winner of the 1999 Israel Prize in Middle Eastern studies and chairman of the Association of Jewish Academics from Iraq, speaking to The Jerusalem Post on Wednesday, confirmed the report.

The most recent to visit the shrine said that some of the inscriptions are now hidden by a layer of plaster.

And now, IDF Radio reported today (though this could be the same report, but its very specific) that famous inscriprition reading: "הנביא בן בוזי הכהן - זכותו תגן עלינו ועל כל ישראל אמן -- "The prophet, son of Buzi the priest, may his merits protects us and all of Israel, amen" -- is now definitely plastered over. This photo shows what it used to look like: 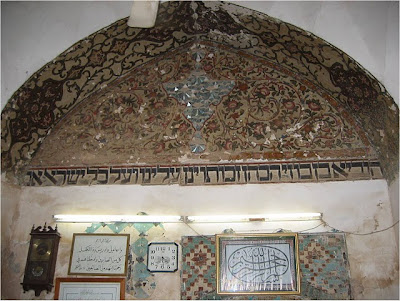 The IDF Radio report says the the Iraqi government claims it was a "misunderstanding."

However, the JPost's take on the situation was:

But the future of Jewish sacred sites looks grim in the intolerant current climate of post-Saddam Iraq, where only eight Jews are left, the Christian minority is severely persecuted by the fundamentalists and ancient Shi'ite mosques are blown up.

The following 5 minutes video about an Iraqi's thoughts of the Jews of Bavel as the interviewer goes to al-Kifl is also enlightening.

Pictures from here.
Going to Israel?
Now get 2 phones for the price of 1 (and free calls too) with Talk'n'Save.

All this zone is very conflict, i think that is very difficult for people, live in this countries because there are wars all time and the people cannot live in peace.

plasterer surrey
Toby, it's the old, blurry line between truth & "the facts." Sometimes, they overlap, but often, they don't.

Twenty-five years ago, I spent six months flat on my back with a dislocated disk, unable to much of anything but nap & read. One day, my once-a-week cleaning woman was dusting my bedroom, and she paused as she picked up a paperback copy of "Bleak House" that was lying near my sickbed. She looked at the cover, which showed a painting of a woman in an somberly decorated 1880s interior, then looked around. "Looks like this place."
The room in the painting was much more elegant than mine, but I took her words as a compliment. "That's a really great book" I told her.
She turned the book over & looked at the blurb on the back. "Is it true? she asked.
"Actually, it's a novel."
"I see. So it didn't actually happen?"
"Well, no. It's a novel."
She made sort of a face. "So it's just made-up storying..."
"Well, yes, basically."
She put the book back down & wiped her hands on her apron, like they were soiled and looked at me like I was a spoiled child. "Then I wouldn't be interested. I don't read things that aren't true." If she could have sent me to bed for the day, she would have, but I was already there.

I'm reminded of Jesus' words to the persnickety Pharisees: "You have strained out the gnat & gulped down the camel."

A plasterer is a tradesman who works with plaster, such as forming a layer of plaster on an interior wall or plaster decorative moldings on ceilings or walls. Very impressive post! I love these updates! Thanks for sharing wonderful info!
Plasterers Merseyside

help of a neighbour who had previously witnessed a plumber

connecting a them the competence necessary for achieving the job,

seminars in Sociology at the University.