What does the blockbuster movie Avatar have to do with Israel and the Palestinians? 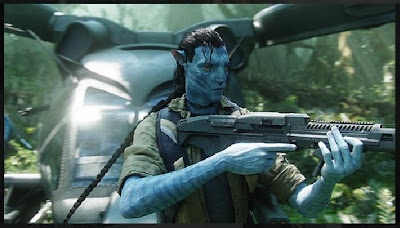 This past Monday evening, the movie Avatar was screened in Israel at the Ramat Gan Ayalon Shopping Center cinema. To everyone's shock, after the film was over and the credits were rolling up the screen, Israeli actor Juliano Mer-Khamis jumped up and started screaming:

The Israeli-Arab actor told the Yediot Achronot newspaper that he didn't deny his outburst, and continued to compare the blue creatures fighting a stronger army to that of Israelis and Palestinians. "No one would dare make the real analogy," he said, "Avatar is one of those brave films that were made to portray the occupation." (sourced from Globes in Hebrew)

Yup, Avatar is precisely, a perfect comparison between the Jews and Palestinians...the exact analogy.

I guess you need 3d glasses to get the full effect...and some of the same stuff that Juliano Mer's been smoking.

He probably helped fund the study we reported today, in which it is "scientifically" determined that Israel is to blame for Palestinian men beating their wives.

Where does the "unobtanium" fit into this perfect analogy?

Actually, I viewed the Na'vi as the Jews...and I have proof as well -- there's a direct mention of Ninet Tayeb, one of Israel's finest singers. See the video: here (Kol Isha Alert for those who don't listen to women singing on video)

Funny, when I first saw the movie it reminded me of the Roman conquest of Judea. Especially the conversion and tree part.

People also said that about the Cardassians and the Bajorans on Star Trek: Deep Space Nine...

Lurker: People also said that about the Olso-like Peace agreement between the Cylons and Mankind in BattleStar Galactica.

But the original Battlestar Galactica came 15 years before Oslo! I think Oslo was the copy...

Seth: Funny, when I first saw the movie it reminded me of the Roman conquest of Judea.

Btw, Pebble in the Sky by Isaac Asimov was written as a deliberate analogy to the Roman occupation of Judea (according to Asimov himself).

Loved the special effects, wasn't thrilled with the liberal/pc plot.

It did cross my mind that people would associate the Na'vi with the Palestinians. Of course such people are shallow one-dimensional morons who have no concept of historical context. Unless of course, we're missing a plot element where the Na'vi killed and maimed thousands of Earthlings, fired deadly rockets indiscriminately at Earth, and threatened to eliminate Earth.

Halevi the Palestinians should all be like the Na'vi!

Menachem: Where does the "unobtanium" fit into this perfect analogy?

Actually, I viewed the Na'vi as the Jews...

BTW: I have proof as well -- There's a direct mention of Ninet Tayeb, one of Israel's finest singers. (See the video here)

Jameel: Actually, I viewed the Na'vi as the Jews...

I would make note of the fact that their very name means "prophet" in Hebrew, and the name of their Deity, "Eywa", sounds like an anagram of the Shem HaMeforash (YHWH).

The early American explorers were after resources that were rare in the old world, i.e. unobtanium.

How does the unobtanium (couldn't they have been a little more creative?)fit in with them being "Jews". We have no resources to speak of.

But if the producers have succeeded it making everyone see themselves in the Na'vi, maybe that's why the movie is so popular.

Menachem: Obviously we have no rare resources here; yet another reason the Israeli actor's outburst was simply ludicrous.

I understand that there are now support groups for depressed people, who are upset they don't live on the planet from Avatar.

We should send them there. :)

Our 'unobtainium' is Jerusalem and Eretz Yisrael - that everyone wants to take away from us.

Joe: I guess that's why its called "unobtainium" -- its unobtainable for them...

Menachem Lipkin: ...unobtanium (couldn't they have been a little more creative?)...

Actually, this word was not made up for the film: See here.

The only way to stretch it to fit the Palestinians is to say that the Na'avi occupy all the planets surrounding earth (even Mars and the Moon) and also occupy half of Earth, and want to drive the humans off (to where?), and also have attempted to rewrite history to read that humans never lived on Earth in the first place.

what liberal PC bull.
If the American Indians( I refuse to use Newspeak) were in such harmony with nature, we would still have wooly mamoths, giant sloths, wooly rhinoceri, giant beavers etc...

Been ages since I was in touch with you.


I thought it was a cool movie -- the politicization of it (like the outburst here) is so stupid and immature.

Daniel; I know some people that act like giant sloths...are you sure they are extinct? :-)

I'm doing well. Thanks for having Kovi over all the time!

....so much about the Na'vi culture that mirrors native American culture; clans, harmony with nature, bow and arrows, war paint, G-d as nature, primitive lifestyle, .....

Haven't seen the movie. Have NO intention of seeing it. Saw that damn ship movie by the same director. It was crap.

When most people watch the movie they generally sympathize with the Na'vis. However, the realistic way where an analogy can be made to mirror the Palestinian situation, is if the humans would succeed with the occupation at the end and the Na'vis will be confronted with dreadful decades of endless occupation, oppression,humiliation, and murder under the hands of the humans. I ask: if the movie indeed ended this way, would people still sympathize with the Na'vis and yet remain blind, ignorant and cold-hearted towards the situation the Palestinians find themselves in?

Avatar is a very good movie, i love the history and the audiovisual effects, i would like to live in Pandora and fight against the human, because the humans destroy the planet, specially palestinians.