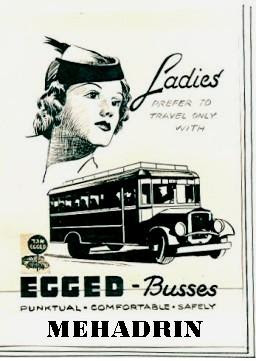 Never a dull moment on those Mehadrin segregated buses...

A secular, 60 year old woman sat down in the front of a mehadrin bus in Ashdod -- in the area designated for men. A man in his twenties approached the woman and told her she was sitting in the area for men on a mehadrin bus. She promptly pulled out of her purse a canister of tear-gas and emptied its contents into the man's face.

The bus driver pulled over to the side of the road, opened all the windows, and called the police -- who detained the woman for questioning.

She told the police, "So what if its a bus full of religious people. Nothing will happen if I sit in the front of the bus."

After an investigation, the police are charging the woman with assault. She has been released on bail pending her trial. (news sources in Hebrew here and here)

If she was smart she would have waited for him to try and forcefully move her and only then empty the can in his face - in self defense of course!

Shimon: Didnt seem very smart of her at all. We don't know if the man wasn't going to "forcefully" move her at all -- in fact, he may have been telling her in case she wasnt aware what sort of bus she was on.

Sounds like the woman didn't think through the steps of what to do when. On the other hand can just see a smart lawyer bringing in evidence that she has bad arthritis or some such physical impairment (or perhaps an incipient mental condition) that won't allow her to travel to the back of the bus. Can see the headlines now of how chareidim discriminate against the disabled and the elderly.

And which was it--tear gas or pepper spray? There is a difference.

ProfK: Its hard to say which it is. The hebrew word used was "גז מדמיע" which literally means "tear gas" -- but it could have been pepper spray (also sold in Israel) but also under the generic term "tear gas".

Only asked Jameel because using tear gas on someone in the US carries different legal penalties then using pepper spray carries.

I say good for her. I have been on buses with my wife and have been approached. I've also seen rude yeshiva bochurs yelling at elderly women and trying to get them move to the back. This is nonsense and this kid deserved it even he was only verbally assaulting her. Chutzpa!

IF the man who approached her, did so in a way that was intimidating, based on the experience of other women who have been physically assaulted for not sitting in the back, I'd say she was justified - perhaps she was afraid of the next step being physical.

IF the man who approached her, did so in a very non-confrontational way in an effort to make her aware of the nature of the bus, then she should have, of course, not used the spray.

Tough call. Unless she knew damn well what kind of bus she was on and was looking to make a statement. How to tell?

Its interesting to note - that all the comments on Ynet - stand up for the women and blast the chareidies. (What else to expect from a left wing anti zionist newspaper ?)
Personally, I am against these seperate buses, and as stated in previous comments - if the bochur prevoked her - he deserves it, and if not, she deserves it.
If the situation was different, say an israeli getting on an Arab bus, and asked to leave/move and they sprayed the arab - then whose side would you be on ? Or perhaps try the opposite - an arab getting on a bus, and being asked to be moved by an Israeli, and the Israeli being sprayed - then I guess most of us would shout "terrorist" -
So my point is - its a touchy situation - the Haredim should get used to living in a real world and stop worrying about their's or others sexuallity, and people should have respect for Haredim and not make them feel pushed into a corner.

If it was pepper spray, why would the bus driver open up the windows?

She should've waited until he tried to force her out of her seat. Then the pepperspray would have been more than justified - as well as a good hard kick in the beitsim.

But until and unless he touched her with anything that could be interpreted as intent to harm OR forcibly remove her, she had no cause to unleash the spray.

She was wrong.
If she had waited, she might have been right.
But as it reads now, she was clearly wrong.