It wasn’t that long ago that Gibbs, Obama’s spokesman, was saying that the time for sanctions against Israel hadn’t yet arrived.

But alas, that time apparently has. 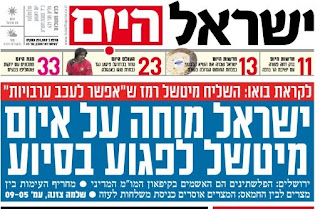 The respected daily Yisrael Hayom (Frontpage headline and article on page 5) is reporting that Mitchell, Obama’s personal envoy to the Middle East has threatened Israel with the removal of loan guarantees if we don’t make progress on Palestinian negotiations.

Israel had requested a clarification from the White House of Mitchell’s threats, and added that it is only the Palestinian side that is refusing to come to the table.

There are those that try to play down Obama’s attitude and actions towards Israel, but what we are seeing here is far worse that what was under George Bush Sr. and James Baker.


This weekend’s Makor Rishon (no online link available) leaked the details of the latest incarnation of the Obama plan to divide Jerusalem and Israel - the details of what Mitchell is demanding from Israel.

The general feeling over the weekend in both the newspapers and the shuls is that Israel is on its way to another expulsion because of American threats and pressure.

Yet despite fulfilling Obama’s explicit demands, that still wasn’t good enough, and He demands more, and says what we’ve done isn’t enough.

It’s easy to say that Bibi has a weak spine, and he's crumbling under intense US pressure (I guess that one then admits that there is intense US pressure), but the majority of Israelis believe that Bibi is playing a dangerous game of brinkmanship in his attempt to defend Israel against an anti-Israeli US administration, but it is a game we are likely to lose because it is so complicated.

There is a reason that 96+% of the country does not believe that Obama is good for Israel. The facts speak for themselves.

UPDATE from the JPost: Finance Minister Yuval Steinitz on Sunday said Israel was not planning to make use of US loan guarantees in the near future and has managed to raise funds without guarantees. (That's one way of telling Obama to jump in a lake).

"It is the Palestinian Authority that needs to change its ways - certainly not the Israeli government," the PMO statement read.


CHARLIE ROSE: When was the last time we used a stick?

Next they dismiss sending in troops at the moment into Israel...

CHARLIE ROSE: Oh, I know, but nobody’s talking about the United States troops going in. They’re not. I mean, give me an example. I’m serious about this. You sit there and you say to Israel, look, if you don’t do this -- what?

GEORGE MITCHELL: Under American law, the United States can withhold support on loan guarantees to Israel. President George W. Bush did so...

GEORGE MITCHELL: ... on one occasion.

CHARLIE ROSE: And his father.

Next there are other sticks they plan to use on Israel that haven't been publicly discussed:

GEORGE MITCHELL: Well, the law that the most recent President Bush acted under wasn’t in place at the time of the first President Bush. So there were different mechanisms.

That’s one mechanism that’s been publicly discussed. There are others, and you have to keep open whatever options.

All you've done is prove that BO is as bad as GB jr as sr for Israel - not that he's worse.

It's also on the front page of Maariv. Mitchell creates a storm.

As a commenter said above, you've only shown that Obama is just as bad as Bush Sr., not that he's worse. And since Bush Jr. did the same thing as well (as Mitchell pointed out), he, too, was just as bad as Obama.

All this only goes to show that I was right a year and a half ago, when I said that Obama was essentially identical to Bush when it came to Israel, and that they would both do the exact same things. We’d be just as badly off with Bush now as we are with Obama. Our big problem is in our own leadership here in Israel, not in the White House.

Lurker: What's amusing is that Dov Bear would make the same argument (though conclude that Obama is a better friend)

JoeSettler: What's amusing is that Dov Bear would make the same argument (though conclude that Obama is a better friend)

Israel can find other trading partners... like China. The US is going to make Israel diversify its alliances and given Obama's hostility towards Israel, that may well turn out to be a blessing in disguise. What is clear is there is no pleasing this Administration.

How about an update on how Jameel and the Israeli media took Mitchell's words completely out of context? At no point did he threaten any kind of financial pressure.

It is becoming very clear that Jameel is obsessed with bashing Obama and will not pass up an opportunity to smear him, no matter how fabricated or blown out of proportion it may be. I don't agree with Obama either, but lying and fear-mongering have no place in this complex and nuanced international-relations-situation.

Did you even bother to see the headline? I didn't make anything up -- merely we quoted the headline articles (and even put up the damn front page screaming headline) from newspapers around Israel.

If you think this is a "conspiracy" that I'm out to get Obama -- why not speak to Yediot, NRG and Yisrael Hayom. They print the headlines...I hyperlink to them.

Lying and fear-mongering? I'm quoting the papers...this isn't being made up by the Muqata blog.

I think you're way too sensitive.

I guess the Prime Minster of Israel is hysterical and taking things out of context.